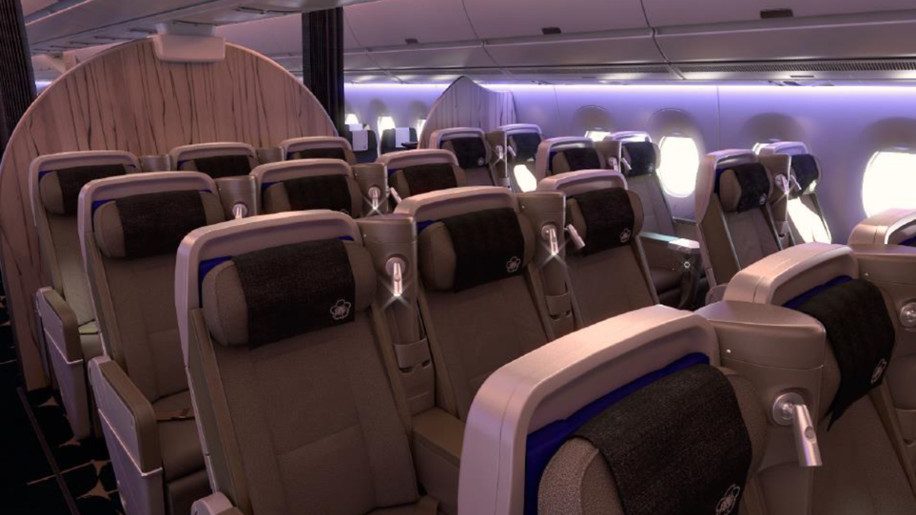 My flight from San Francisco to Taipei was scheduled to take off at 0140. Having arrived at San Francisco International Airport’s International Terminal early at 2200, I made my way to the China Airlines check-in counter, where I was assigned my boarding pass. I proceeded to the security checkpoint at 2210 and was cleared within five minutes.

Premium economy represents a new class type by China Airlines, and the carrier has delivered a product that represents a significant step up from an excellent economy offering on the B777-300ER.

Taiwanese designer Ray Chen has incorporated Song dynasty-inspired design cues across the entire Boeing aircraft, and the premium economy cabin is no different. The walls are lined with an impressive persimmon wood texturing effect.

Encased in a fixed-back shell, each seat is able to recline without affecting passengers sat behind. In a reclined position, the seat slides forward and the leg rest extends, too.

Premium economy seats are arranged in a 2-4-2 layout across eight rows and offer a 19-inch seat width and 39-inch pitch. Each comes with a 12.1-inch IFE touchscreen, metal tray table, water bottle holder at the side, reading light, USB charging port, and a dedicated drinks holder.

I was assigned seat 30F, at the very first row of the premium economy cabin. Unfortunately, all aisle seats were occupied and so I was allocated a middle seat. While this would have usually meant that a visit to the restroom would require me stepping over my neighbour, I did not experience such trouble this time, partly due to the generous leg space – plus the person sat next to me was a seven-year-old boy.

The generous seat pitch is superior to those offered by Air New Zealand, Cathay Pacific and Qantas, and in terms of hard product was one of the best premium economy seats I’ve seen. The metallic tray table was light but sturdy, and capable of supporting my 15-inch laptop comfortably.

The IFE system is another notable strength. The touchscreen was very responsive, and the colours were crisp and vibrant.

Upon entering the aircraft, I was shown to my seat, which came with a complimentary amenity kit, slippers and inflatable neck rest.

Flight CI003 departed San Francisco at 0200 and in-flight service began at 0210 with drinks. The 12-hour flight featured two meal services, dinner and breakfast. The former began roughly an hour after take-off. The starter consisted of scallop and prawn zucchini salad with balsamic dressing, and I chose steamed cod with ham, black mushroom and steamed rice for my main. To finish, there were fresh fruits, ice cream and a chocolate bar.

Overall, the dinner service was pleasant but not memorable. I found the balsamic vinaigrette overpowering, while the cod was slightly overcooked. However, the fruits were juicy and the ice cream, which came from the Haagen-Dazs Artisan line, was particularly delicious.

The lights were dimmed shortly after dinner, and I reclined my seat to catch a few hours of rest. The addition of a neck support and blanket ensured I had a good sleep.

Two hours before arrival, breakfast service began and I chose the Western option of cheese omelette and chicken sausage with potatoes, accompanied by fruit and yogurt. The quality of this meal was excellent.

While tucking into my breakfast, I took the opportunity to test out China Airlines’ in-flight wifi capabilities, and was suitably impressed by the performance. Speedtest measured download bandwidth at 3.54 Mbps while the upload speed was 1.01 Mbps – fast enough for light web browsing, checking emails, and using instant messaging apps such as Whatsapp.

Descent was announced at 0445, and we touched down in Taiwan Taoyuan International Airport at 0520, docking at the arrival gate of Terminal 2 five minutes later.

Overall, this is one of the finest premium economy products I’ve had the privilege of experiencing. China Airlines should be proud of their outstanding new cabin class.