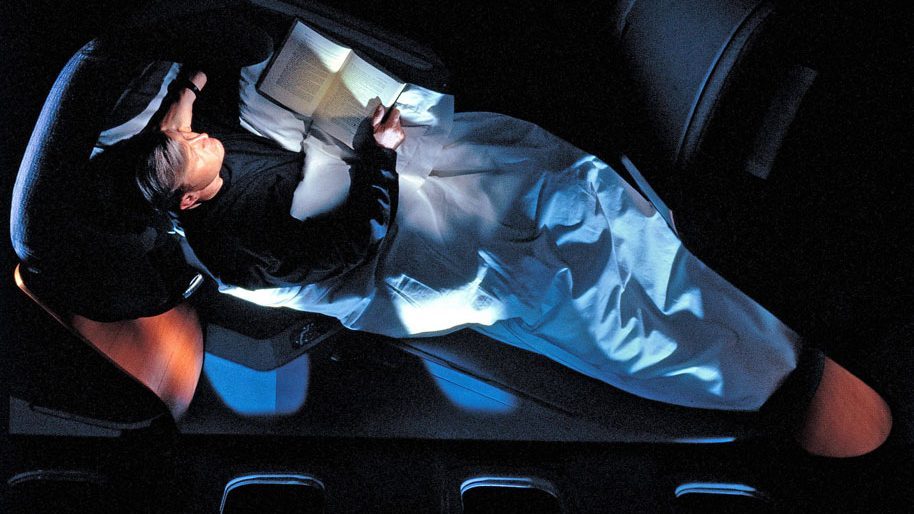 For the inbound leg of this flight, click here.

First impressions I’d checked in online for this flight 1350 departure from London Heathrow T5 on flight BA287 to San Francisco. I was travelling with my wife. The flights were reward tickets, and we were using the BA Amex companion ticket which can be earned using the BA Amex platinum card and spending more than £10,000 in an earning year, something which we had just scraped. We walked to the far end of the terminal where the First check-in and bag drop is located. There was no queue and after checking in the bags, we walked to fast track security, which was fairly slow and took around 10 minutes to clear. Having first class tickets, for once we could avoid the annoyance of having to complete a circuit of the airport to access the lounges, and walked straight through the door to the right of security (the “millionaire’s door” into the Concorde Lounge, which is reserved for those with first class tickets).

The lounge the Concorde Lounge is quieter than the first class lounge across the concourse and has its own restaurant, but after having a pot of tea we wanted to have something to eat, and so instead of waiting for a restaurant style meal, we booked treatments in the Elemis Lounge at the first available appointment time (1215) and then walked across to the first class lounge and used the buffet there. There are a few choices for treatments. I chose the massage chair which gives you a full body massage while the therapist massages your shoulder and scalp. It was very relaxing, though the chair’s massage was better than that given by the therapist.

Boarding we were boarding from Terminal B which is accessed by the train, so around 50 minutes before departure we left the Concorde Lounge and walked down to Gate B44. We joined the fast track queue and when the flight was called were quickly on the aircraft, had our jackets taken and were offered water, juice or champagne.

The seat BA’s First seat has been around for many years with no changes, and in fact on the B747-400 fleet BA’s Club World cabin has been completely refitted with the new Club World seat with new AVOD IFE (Audio and Video on Demand in-flight entertainment), while First still has the old system. There are two configurations of the B747-400 in BA’s fleet, but the differences in Club World seating do not affect the First cabin, which in both configurations is in the nose of the aircraft with 14 seats, being rows 1-5 with a seat configuration of 1-1 (click here to view the seat plan). For detailed notes on where to sit as a single traveller, see a previous review here.

The only two pairs of seats for those travelling together are rows 4 and 5, E and F. We were in row 4. The advantage of this is that it is further away from the noise of the galley. The disadvantage is that you feel quite exposed, since beyond the wall of your footrest there is open space and a table where the newspapers and magazines are stored, and anyone walking back to the washroom walks very close by to the edge of your seat. There are also no overhead lockers for these seats, which gives a feeling of space to the cabin, but means you might find it difficult to have your luggage stowed close by if you board after those in the window seats which make up the remainder of the cabin.

The flight There is in-seat power but unfortunately there was only one on-board adaptor available, and the gentleman in 1K had been quicker to get it than I was. The IFE system took an age to get started, and it was only at 1530 when I pointed this out that the flight attendant investigated and discovered that the whole cabin was not working since the system had not been switched on.

The temperature in the cabin shortly after take-off first went very cold, then warm, and the stabilised itself. I was glad I was travelling with someone who could confirm these observations, or I might have worried I was falling ill. The aircraft was full, including in First , but we were only a few minutes late pushing away, and the captain said we would arrive in San Francisco on time.

The service was friendly, informal, and very slightly disorganised. Drinks orders were written down but then forgotten, the crew seemed hazy on what was available from the menu, and the IFE not being turned on was strange. That said they were friendly, and by the end of the flight had won us over. I slept for a few hours before landing, and we arrived on time at SFO.

Arrival There was no queue at immigration, but then unfortunately the First class bags were delayed, arriving after 25 minutes standing by the carousel, and long after most of the business class bags.

Verdict a good service, but the product is looking as old as ever. IFE is years out of date, seat power requires a special adapter which wasn’t available, and although we received the new Anya Hindmarch washbag, it needs to be accompanied by a new seat.