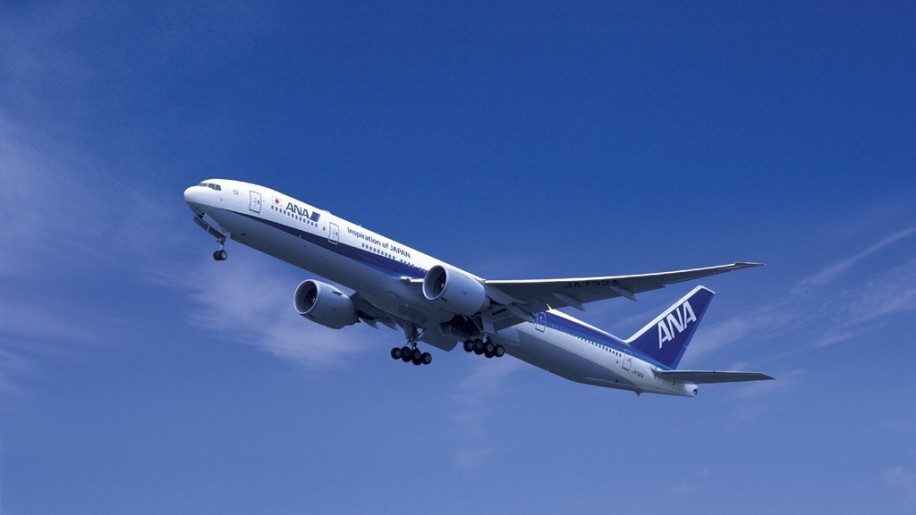 NB: this flight review originally had lots of photos.

ANA started flights from London Heathrow to Haneda in March 30 2014, switching its daily flight from Narita airport. It flies the route using a B777-300ER of which there are several different seating configurations (ANA has 19 B777-300ER aircraft out of a total of 216 aircraft in total – as of March 2014).

I had flown over on the night flight from London a few days earlier, travelling in business class. To read that review, click here

This flight was a day flight back from Tokyo to London, and so to try something new I booked premium economy class.

I arrived for my 1135 departure from Tokyo Haneda to London Heathrow at 0945, the journey for central Tokyo only taking 20 minutes, much quicker than the journey out to Narita. Haneda has two terminals for domestic flights, and then an International Terminal.

I went up the escalator and found the ANA check-in. Premium Economy passengers are allowed to use the premium check-in which I did. I had no bags to check, so picked up my boarding card having already checked in, and learned that the flight was delayed by 45 minutes because of its late arrival. I then went through to security and immigration, both of which took less than a couple of minutes.

I then went to the lounge, and since these have been expanded with ANA moving to Haneda, there is a separate look at these (with photos) here. 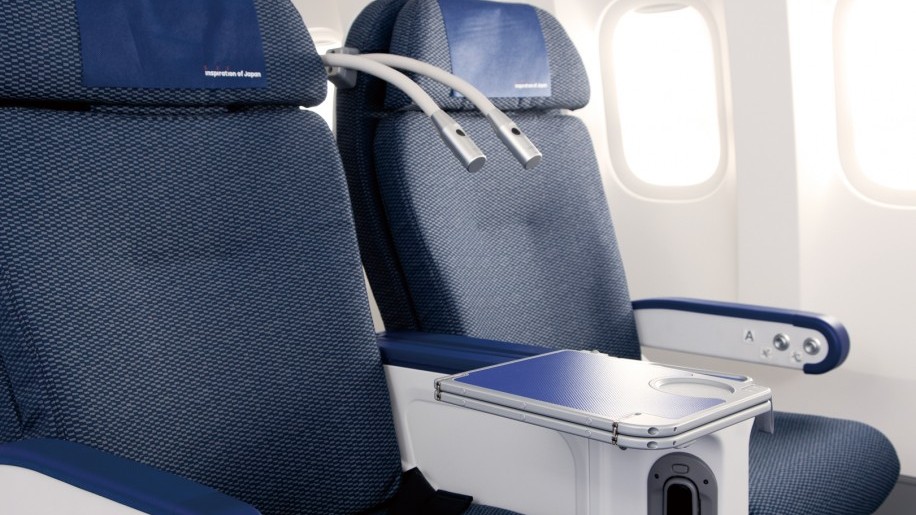 The Gate was showing as 144 which is quite a walk from this area, so I set off early. There is another ANA lounge here and I went up and took a couple of quick photos of it.

By the time I got to the Gate most passengers had already boarded (though the flight was not full by any means). I think this end of the International Terminal is new – it certainly looks it.

Gate 144 was light and spacious, with views across to the aircraft,

And down to the Gate, where we were being urged to get a move on (politely, of course).

Once our boarding cards had been checked we went down onto the airbridge, with two bridges being used.

The premium economy cabin on this configuration of the B777-300ER was in three rows and in its own distinct cabin. In front of it was business class, screened off by a wall and curtains, behind it was the foremost galley for economy class, and then further back the economy cabin. The galley has two washrooms, and these were never busy but then the flight was only lightly loaded in economy and premium economy. The washroom on the left hand side (when looking forward) is much larger, with plenty of room for changing for an overnight flight.

There are magazine racks on the back wall with a fairly sparse selection, and we were offered newspapers – Japanese only, though whether this was because there were some left in business class or it is part of the premium economy offering, I don’t know.

The seat pitch is generous – 38 inches, 4 inches more than regular Economy Class, and 10 per cent wider being 19.3 inches (49cm) wide. There are leg rests which come out from under the seat, and foot rests from the seat in front. One arm has the table which folds out and which slants slightly and isn’t much use for working on, though I jammed the provided pillow under it and this worked fine, but that might be difficult to do if someone was in the seat next to you.

The seat has a fair amount of storage space, with a large seat pocket and then above it two mesh pockets, these were holding the complimentary slippers – with shoe horn – and ANA-branded headphones. There were no eye masks of ear plugs, but these were available on request. Seats also have large head rests to provide better support for your head

The IFE is viewed by a seat-back 10.6 inch touch screen, unless you are in the front row in which case it is on the wall in front and is slightly larger – because further away – being 12.1 inches. Each seat has its own PC power outlet, USB port, i-Pod connection, and a personal light coming out from the seat about shoulder height – useful when the cabin is dimmed but actually quite annoying most of the time since it rests against you shoulder / upper arm.

Which seats are best?

This cabin has only three rows – 25,26 and 27. The front seats in row 25 have more room, particularly the front four in the middle, though I think the whole of row 25 is worth thinking about.

Next window seats are worth considering, but bear in mind that with the seats reclined it can be difficult to get out, and you’ll have to disturb the person inside you on the aisle.

Generally I would choose a window seat if you want not to be disturbed, and an aisle seat if on a long day flight like this you think you might want to keep getting up and stretching your legs.

The rear row (27) might be slightly noisier because of the galley and washroom, so front row is best, then middle, then rear I would say.

Worst seats are 26E and 27E, because as well as being centre seats, they have restricted leg room because of the IFE box, and also the aisle seats at the rear (28 D and 28G) because when you return from the galley they seem to stick out into the aisle and so run the risk of being knocked, they also look quite exposed since the wall behind them isn’t flush with the seat.

I had chosen an aisle seat – 26D – since I had been assured at check-in that there would be no one sitting next to me (inside) if I did. As it turned out I had the whole row to myself, and because there were passengers in the seat in front of mine 25D and behind 27D I moved over to 27E so I could recline and yet not be reclined into. Obviously this is a great position to be in, but it was only possible because out of 26 seats only 10 were occupied.

We took off quickly though once again I couldn’t understand or hear any of the flight announcements, and had no idea if we would make up any of the time we had lost by setting off 45 minutes late. After about 20 minutes the drinks service began, which is an “enhanced service” over economy class, with the offer of sparkling wine, sake and what was called business class red and white wine, though when I asked if it was the same as being served in business class, I was told “no” and it came in small bottles in any case. Maybe there was extra choice – it was difficult to tell. Our drinks came with rice crackers.

The menu said that in addition to the economy meal service, we would also get “exclusive services… including “at the time after the first meal and before the second meal”

The food was delicious, once again, and the business class dessert seemed to be Haagen Dasz ice creams which were handed out after the meal.

This was a very long flight – over 12 hours – so I then reclined my seat, used the ear plugs and eye masks I had requested, and been given, and slept for about four hours – when I woke I saw I had been given a bottle of water.

I then worked for the rest of the flight. On the flight on the way over (a night flight) the aircraft had been enabled for wifi but I had not used it. For this day flight back in premium economy, I was thinking I might pay for at least a few hours of internet, if only to download my emails, but the wifi was not available. I asked why this was and learned that this was a different aircraft (although the same configuration) and do not have the capability, though whether this was because it had not been fitted, or because the wifi is still being trialled on just a few aircraft, I don’t know.

Anyway, there are worse things than being able to work for several hours clearing your work and not being distracted by emails – or surfing the internet, so once I had woken I just got on with completing a lot of much delayed projects, supplied with lots of green tea from the galley behind. On request these cups occasionally came with an individually wrapped piece of Nestle Crunch chocolate, which were delicious, but unfortunately like so much of the food on the aircraft came with the information that each morsel contained 27Kcal. After five of them I stopped.

Just over halfway through the flight we were offered a choice of our light meal, being chicken soup, ramen noodles or soba noodles, and the crew came round very often offering water.

About two hours before landing there was another meal, again with a choice between Japanese or International menu. The crew hand over a laminated card with pictures and desciptions (you can see it here), though I found it was also on the inflight IFE menu. Again, this was very tasty.

The rest of the flight passed without incident, and we landed at London Heathrow T3 about 30 minutes late at 1700. There was no queue at immigration, and as I had no bags, I then made my way to the Piccadilly Line Underground Station.

A comfortable seat, not best in class, but well thought out and with power for working, and enough room to do so. The seat has lots of room for sleeping as well, though obviously since this was a day flight I couldn’t test this in the same way as if it had been a night sector. In this configuration the premium economy is in a distinct cabin being between business class and the galley, and so you get peace and quiet – well worth trying.