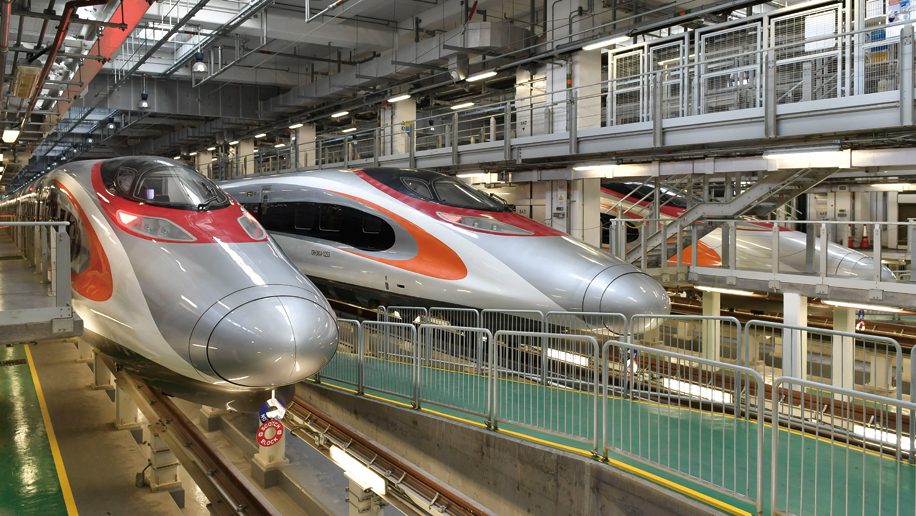 Arriving at the station

Airport Express Shuttle Bus K1 also stops at West Kowloon Station. Passengers need to show one of four items to board the Shuttle Bus for free

Passengers can either buy tickets online (ticketing.highspeed.mtr.com.hk), by calling a booking hotline (+852 2120 0888), or at the station at Level B1 ticketing counters (at least 45 minutes before departure).

Holders of PRC resident identity cards, home return permits, Taiwanese mainland travel permits and foreign passports recognised by the PRC government can buy tickets via mainland ticketing channels, including the 12306.cn website, as well as through a mobile app. Tickets bought on 12306.cn can be collected at special ticket machines in the station, or through the designated counters in the station. In the latter case, a handling fee is charged based on the ticket fare.

Ticket fares are set in renminbi, and the Hong Kong dollar fares, announced on the first day of each month, are adjusted monthly according to the floating exchange rate. Fares also differ based on different travel classes: second class, first class, premium class and business class. The latter two are only available on some mainland trains.

Most direct journeys cost more than transfer journeys. For example, second-class tickets from Hong Kong West Kowloon to Guangzhou South Railway Station cost RMB215 (US$31). However, dividing the journey into two separate sections costs RMB68 (US$9.9) from Hong Kong West Kowloon to Futian, and RMB82 (US$12) from Futian on to Guangzhou South, totalling RMB150 (US$22) – a RMB65 (US$9.5) saving.

There are strict regulations about the weight and length of baggage, and oversize or overweight baggage may be rejected. The maximum weight that adults can carry onboard is 20kg, and the sum of the length, width and height of hand-carried baggage must not exceed 130cm – about the size of a 24-inch (61cm) suitcase.

There is no porter service, so you’ll need to carry your bags yourself and place them in the designated racks.

Make sure the name and number printed on your ticket correspond to those on your personal identity document, as this will be checked at the Level B1 Ticketing Concourse. After the ID check, you’ll need to go through the first set of automated ticketing gates and undergo an airport-style security check on the same floor.

Next, head to Level B3 where you’ll complete both the Hong Kong and mainland immigration inspection procedures and may need to go through customs. Then you can wait at the Departure Concourse.

Passengers can access the platform 15 minutes before departure and gates close five minutes prior to the train leaving. Pay careful attention to the broadcast and, when your train is announced, go through the second set of gates and descend to the platform on Level B4 for boarding. Remember to keep your ticket during your journey, as you’ll need it to exit the gate upon arrival – at least for now; MTR Corporation wants to introduce a ticketless system within two to three years, according to a South China Morning Post report.

Wifi tips for the “Vibrant Express”

If you’re travelling on the Guangzhou-Shenzhen-Hong Kong Express Rail Link, you’ll have the chance to experience the new “Vibrant Express”, which has 579 seats (and two wheelchair spaces) split between second class (511 seats in cars 2-7) and first class (68 seats in cars 1 and 8). Amenities include rotatable chairs, water supply, and power sockets in front of the seats.