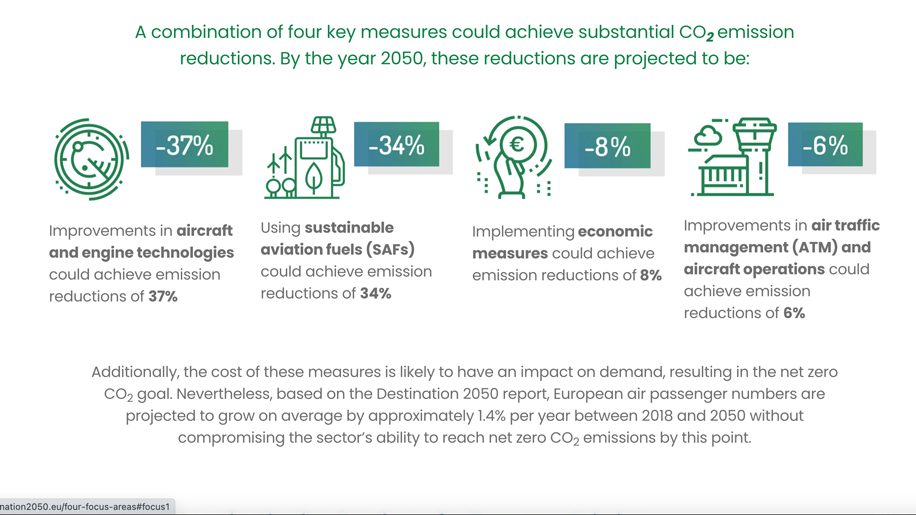 In a report issued last month, and in a policy event, Europe’s aviation sector has detailed a way for it to reach net zero CO2 emissions by 2050 through a combination of four key measures:

The report – Destination 2050 – A Route to Net Zero European Aviation – is described as its ‘flagship sustainability initiative’. It is based on a new, independent report commissioned from the Royal Netherlands Aerospace Centre (NLR) and SEO Amsterdam Economics.

Since the four key measures are “subject to securing the required supporting policy and financing framework at EU and national level”, the report was followed by a policy event with policymakers.

The report assumes that European air passenger numbers are projected to grow on average by approximately 1.4 per cent per year between 2018 and 2050, “maintaining international competitiveness and aviation’s benefits to society”, yet still charts a possible path to reach net zero CO2 emissions. 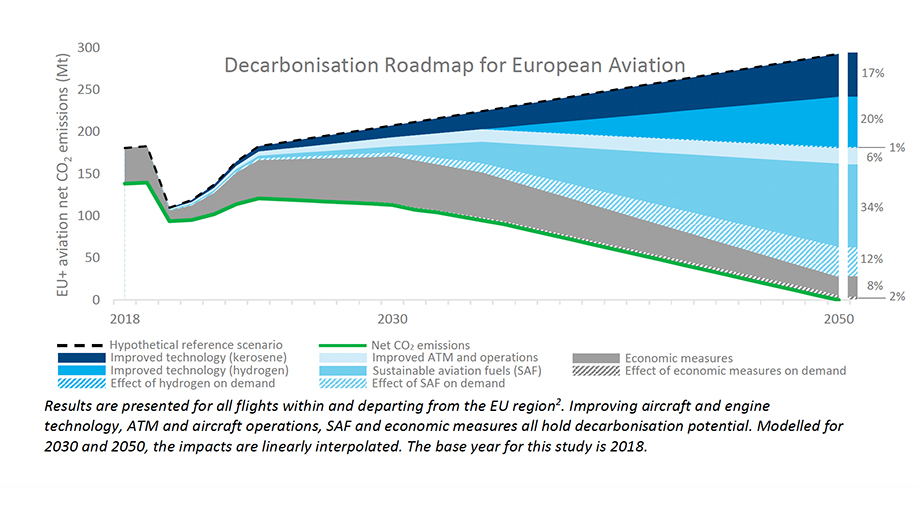 Speaking at the policy event, policymakers gave the plan a welcome, but described it as a first step, and that more detail would be needed. Peter Harrison, Executive Director at EU Climate Policy said that it was inevitable that there would be price rises as a result of the move to net zero, and that there would be a reduction in demand as a result. Harrison said that the aviation industry needed to start “Recognising and internalizing that business as usual is going to look very different in the future.”

“If you are doing policy for 2030 you need to look at the fundamentals… The impacts of climate change have only just started and I find it impossible to believe that a decade from now citizens will be sitting back and just accepting the status quo…. The industry needs to start taking demand reduction as a real possibility, and that will be the reality if we do not get moving on zero emissions technologies.”

The Destination 2050 initiative is led by five European aviation associations:

The report can be downloaded from here Destination2050.

“The decisive and tangible actions set out in this roadmap are unprecedented.” said Olivier Jankovec, Director General at ACI EUROPE. “Here we have an entire sector not just committing to decarbonisation, but actually charting the path to make it happen and effectively contribute to the EU’s Climate objectives and the Paris Agreement. But whilst we embrace our responsibilities, it is clear that we cannot do this alone. It takes two to tango. Now we need the EU to deliver the policy and regulatory framework that will enable us to deliver net zero European Aviation by 2050. We therefore urge institutional stakeholders to respond to our call and now join the EU Pact for Sustainable Aviation we tabled last November. ”