Ever since the new Berlin Brandenburg airport (BER) failed to open on time many years ago there have been few if any photos made available of its interior.

Most images available were of a bleak external scene taken in dismal weather.

The airport’s latest opening date is set for the end of October and this time one feels it will really happen not least because far fewer travellers will make the opening easier to manage.

Now Berlin’s Tagesspiegel has published a description of BER along with photos and a video.

I shall let readers judge for themselves about what they think of the new airport. But one thing worth noting is that aviation is fast-changing and one must remember BER was designed at a time when things were done somewhat differently to today.

Says Tagesspiegel, “You feel that all these [check-in] counters belong to an earlier era, when travelling meant checking in luggage and printing boarding passes.

“It is now said that 75 per cent of all passengers travel with hand luggage [may be true for Berlin but this figure surely varies from airport to airport, route to route] and more and more are checking in with their smartphones.”

It is worth noting that BER was designed in 2006 when passenger numbers of Berlin’s two airports (Tegel and Schonefeld) were 18 million a year.

That is just as well seeing as it will take years for passenger numbers to recover to what they were pre-Covid.

And just as I write these words there is news from Germany that Berlin Schonefeld will officially become BER’s Terminal 5.

So that is how BER can expand. Tegel will remain open for a limited time, although it is reported that it could close as early as November. 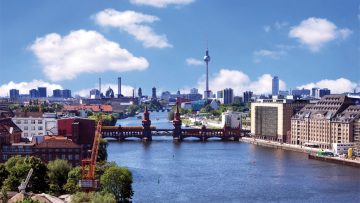