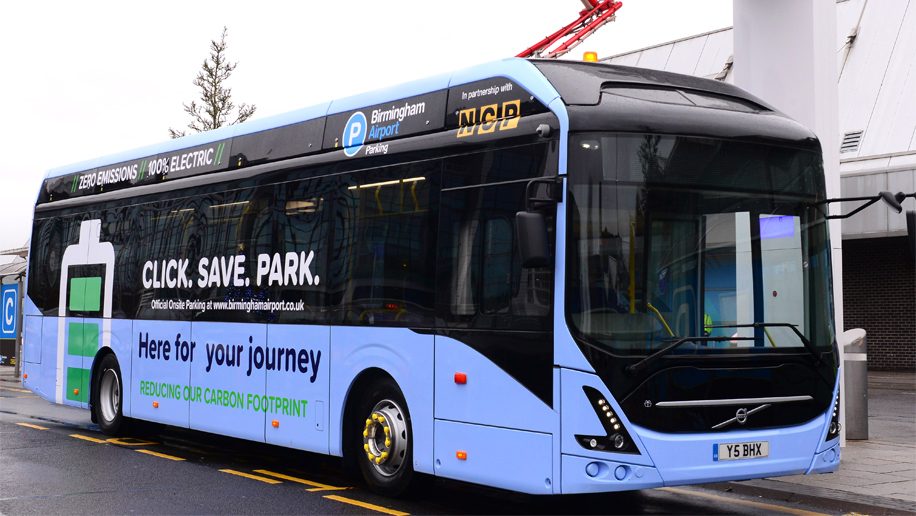 Birmingham Airport has launched a fleet of fully-electric buses to replace the diesel vehicles currently in operation between the terminal and car parks.

The six 7900e single-deck buses will run a free passenger service across all landside routes.

The buses are quieter, have USB charging points and can provide location-based updates for passengers.

The airport paid £1.8 million for the fleet and new charging points, also using a £1.4 million grant for the Department for Transport as part of its Ultra Low Emission Bus Scheme.

Two charging points have been installed outside of the terminal, with each bus taking around six minutes to complete a charge.

Additional charging points have been installed in the coach park.

Birmingham said it planned to make them available for use by public electric bus and coach operators.

There are currently no charging points available for the public.

The airport has pledged to become ‘net zero carbon’ accredited by 2033.

More than 20 European airports have currently achieved that status, according to industry body Airport Carbon Accreditation.

Proving they are doing their bit for sustainability is a growing priority for airports as criticism over the environmental impact of flying mounts – see our recent feature:

Ground vehicles are a common target. For example, Dublin Airport is converting 111 of its own to low-emission models over the next five years, as well as switching its specialist four-wheel drives to plug-in hybrids, as well as introducing electric buses.

Gatwick works with Carbon Clear, whose projects include forest protection programmes and the supporting of renewable energy in countries including Cambodia, Kenya and Ethiopia.

Heathrow has been funding the restoration of UK peatland that has been used for extraction, which it says can both offset its emissions and support biodiversity, water quality and flood protection. It points to studies showing that if all of the UK’s bogs were in favourable conditions that they could remove an additional 3 million tonnes of carbon a year.

However such schemes can be controversial, with critics arguing they fail to properly offset the impact of carbon emissions while giving organisations an excuse to keep polluting.