ANA unveils menus and amenities on new Hawaii-bound A380 flights

Japan’s All Nippon Airways (ANA) has unveiled details of the menus and amenities that will be offered to passengers on board its upcoming non-stop Airbus A380 flights between Tokyo Narita and Honolulu launching May 24, 2019.

Depending on passengers’ class of travel, different in-flight meal options as well as amenity kits, bedding and loungewear will be offered, many of which will be exclusive to the A380 service to Honolulu.

ANA has previously unveiled details of the seat products on board its new superjumbo aircraft, notably the design of an all-new first class suite and a refreshed fully flat business class product.

Now, however, passengers have been given a glimpse of some of the extra features they can expect when travelling on ANA’s new route. Here’s what they include.

Passengers travelling in ANA’s brand new first class suites will be served meals (pictured above) developed by the staff of Italian restaurant Noe at the Four Seasons Resort Oahu at Ko Olina.

Meals are overseen by the restaurant’s Michelin-starred chef Ryo Takatsuka, and will be served from the inaugural flight until the end of August 2019.

Premium economy passengers, meanwhile, will be getting an upgraded meal choice compared to those in economy. Travellers will have the choice of either an international meal…

…or a Japanese option.

That being said, economy class travellers aren’t being ignored and ANA has collaborated with Australian casual dining eatery Bills to develop meals that will be served on flights departing Tokyo from May this year until May 2020. Passengers will also get a complimentary coupon for a drink at Bills Waikiki in Honolulu.

ANA has not revealed what menu passengers in business class will be served at this stage.

However, passengers in all classes will be able to order one of the airline’s exclusive Blue Hawaii cocktails, which are available on flights both to and from Honolulu.

Passengers booked in first and business class, as well as in an ANA Couchiii seat, will all receive different bedding.

Those travelling in first class can expect a comforter from Japanese bedding company Tokyo Nishikawa Sangyo along with Hungarian white duck down pillows (pictured above). Organic cotton loungewear and blankets from organic bedding brand Tenerita are also available.

Passengers in business class, meanwhile, will also receive sheets, loungewear, a comforter and a pillow, though these are instead from Japanese brand Maruhachi. The business class pillow is notably designed to be softer and one side and more structured on the other, in order to provide better neck support.

Those booked in ANA Couchiii seats, meanwhile, will also receive dedicated bed sheets, a pillow and a blanket.

Amenity kits will also be available to those travelling in the airline’s first, business and premium economy cabins.

Meanwhile in business class, passengers can expect a more conventional amenity kit designed in tandem with American luxury brand, Fred Segal. These kits are exclusive to the Honolulu route.

Premium economy passengers will also be given a kit, though it is notably more simplistic, being made from Tyvek and bearing an image of the A380’s tailfin.

There are a few benefits for members of the airline’s ANA Mileage Club frequent flyer programme that are exclusive to this service.

Notably this includes the ability to redeem miles in order to get access to the Mahalo Lounge on the second floor of the Waikiki Shopping Plaza from Spring 2019 onwards. Access to this lounge will also be provided to travellers participating in the airline’s ANA Hawaii Tour programme.

Mileage Club Members are also permitted use of the electronic ANA Express Bus that the T Galleria Hawaii by DFS duty free store with Hawaii and the Ala Moana Center.

ANA is taking delivery of three A380s, each of which features a different turtle-themed livery. The airline’s first A380 is expected to roll out of the paint shop mid next month.

All three A380s will exclusively operate its non-stop flights to Honolulu. 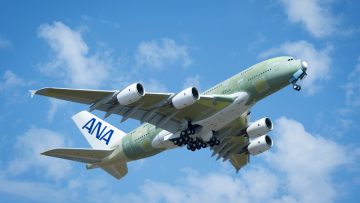 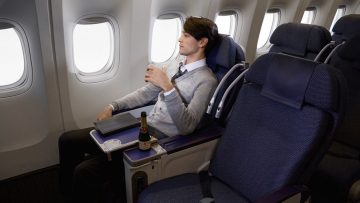