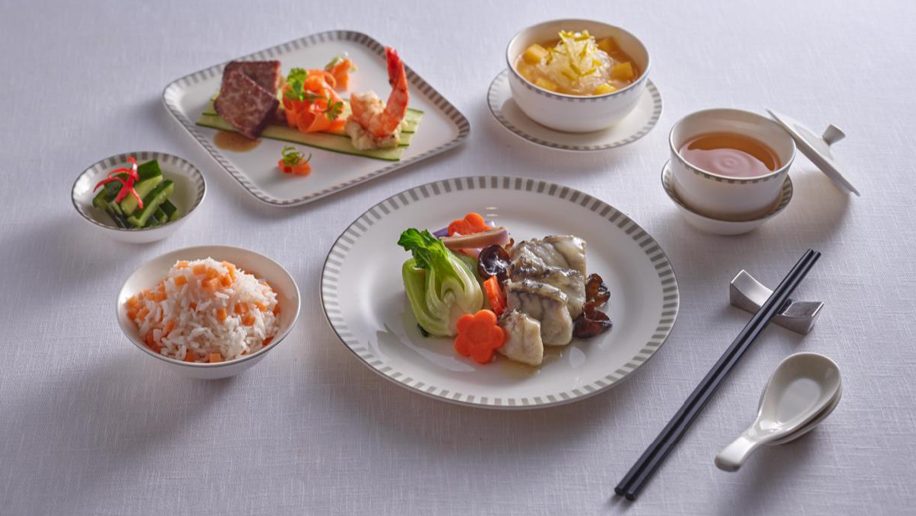 Business class passengers flying on Singapore Airlines’ routes to and from China can expect to see a new Chinese in-flight dining concept starting next month.

The new concept, which Singapore Airlines is calling Shi Quan Wei Mei, will be available from July 1 onwards on flights between Singapore and Hong Kong, Beijing, Shanghai and Guangzhou.

Meals have been developed in partnership with chef Zhu Jun, a one-Michelin-star chef from Shanghai, and vice president and chief technology officer of the Jade Group of restaurants.

“The design philosophy for the new Shi Quan Wei Mei is based on the innovative use of the freshest seasonal ingredients to showcase the essence of Chinese food culture,” said chef Zhu Jun.

So what can passengers expect from the new business class dining concept?

Meals will be offered in three courses, and will take after the airline’s suites and first class dining concept, Shi Quan Shi Mei, which it launched back in 2015 on select flights between Singapore and China.

Passengers will have the choice of one of two cold Chinese-style appetisers, including fried marinated sea bass and spicy tofu beef salad. This will be followed by a main course – served on separate tableware from the rice and noodles – that includes pepper braised beef brisket with turnip and carrot, and braised pork belly in pickle sauce.

The final course comprises a dessert such as chilled orange-scented malva nut soup, and chilled double-boiled papaya and snow fungus soup. Side dishes such as pumpkin with scallion oil or marinated cucumber will also be provided.

Meanwhile, rival airline Cathay Pacific announced it would be introducing a new business class dining concept across its long-haul network starting next month. The new concept focuses on added flexibility for passengers when it comes to selecting their meals, and notably will include a “room service” style of dining for breakfast meals.