One by one Asia’s traditional airlines are having to face the challenges of today’s marketplace.

In decades gone by they flourished by dint of superior service and keen pricing.

But today, faced by competition mainly from the Gulf carriers and the many airlines of mainland China, that is not enough.

Thai Airways and Malaysia Airlines have already adopted to the new marketplace. Both have cutback their long-haul networks. Malaysia Airlines, for example, took the drastic step of axing all intercontinental flights with the exception of those to London and Australasia.

Now it’s the turn of Cathay Pacific and SIA.

Several weeks ago Hong Kong’s Cathay Pacific announced it would review its business plan which would lead to hundreds of job losses.

And according to a report in Hong Kong’s South China Morning Post it’s the turn of Singapore Airlines.

SIA recently posted poor financial results. As a lean carrier it has little choice but to adopt a new business plan, which is expected to lead to job losses and possibly a review of its network.

As with Cathay Pacific, SIA is essentially a sixth-freedom airline with many if not most passengers flying through, rather than to or from, its hub.

And many of these transfer passengers have been lost to rivals based in the Gulf, mainland China and elsewhere in Asia over the past couple of decades.

Closer to home SIA must also deal with competition from LCCs (low-cost carriers) on regional routes (these include Australia) even though it (SIA) operates it own budget subsidiary by the name of Scoot.

SIA is famed for its economy class which is one of the best. Its large fleet of B777s are all configured in economy class as Boeing originally recommended, in other words nine-across (3-3-3).

But one wonders for how long this happy situation will continue.

As we reported earlier this year SIA will, in years to come, take delivery of a fleet of new B777X aircraft and these will almost certainly be configured 10-across 3-4-3. 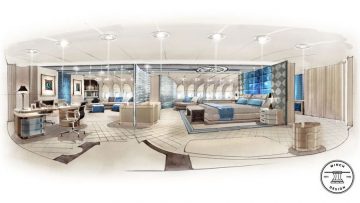 News
Singapore Airlines to fly A350 direct to Barcelona
9 May 2017
Loading...