United Airlines has announced plans to fly between Los Angeles and Singapore from October 27.

The daily service will be the longest non-stop flight operating to or from the US, and will also be the longest Dreamliner route in the world at 8,700 miles (United currently holds this record with its San Francisco-Singapore service).

Singapore Airlines has previously operated non-stop services to both LA and New York, but these were cancelled in 2013 due to rising fuel costs.

SIA plans to resurrect this route when it takes delivery of its new A350-900ULR (Ultra Long Range) aircraft from Airbus.

Qantas currently operates the longest regular service to and from the US, with its A380 flights between Sydney and Dallas.

United’s flight UA37 will depart LAX at 2055, arriving into Singapore at 0650 two days later, with the return leg UA38 leaving Changi airport at 1100 and landing back into Los Angeles at 1015.

The flight time on the westbound leg will be around 17 hours 55 minutes, which will put it up there with the longest commercial flights in the world. Qatar Airways is currently considered to hold this record, with its Doha-Auckland service taking around 17 hours 30 minutes.

The B787-9 aircraft serving the LA-Singapore route will feature United’s new Polaris business class product, as well as 204 economy and 88 Economy Plus seats.

“Whether our customers are on leisure or business travel, United is making travel to Singapore easier and even more convenient than ever before and customers arriving to Los Angeles will have multiple opportunities to connect to hundreds of United destinations in the US, Canada and Latin America.

“Our commitment to our Los Angeles hub is more than 50 years strong and with today’s new Singapore service announcement, we continue to strengthen our position as the leading US carrier to Asia.” 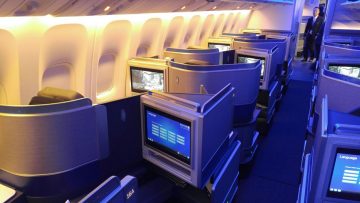