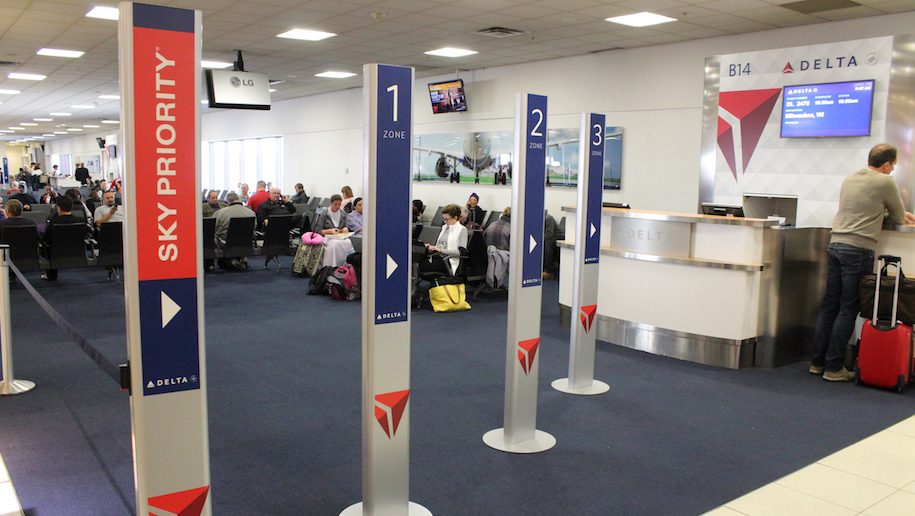 Taking a cue from Southwest Airlines, Delta Air Lines is testing out a new queuing system on flights departing from its Atlanta hub.

Rather than simply announcing boarding by groups or zones, the airline has set up a series of four parallel boarding lines, each with its own identifying pillar, at five gates in Concourse B of Hartsfield–Jackson International Airport. The queues are divided into Premium/Sky Priority, Group 1, Group 2, and Group 3.

“As this new boarding process rolls out, our customers will experience less crowding and confusion at the gate in addition to a more seamless transition when entering the plane,” said Tim Mapes, Delta’s senior vice president and chief marketing officer.

Southwest also uses a pillared queuing system, aided by video terminals and signage indicating boarding position in three groups — A, B, and C. Unlike Delta, however, Southwest has open seating and does not offer seat assignments.

The airline described the Atlanta system as an “interim solution” that would be introduced in additional airports if customer feedback remains positive. “We tested a variety of boarding processes, and our customers and employees let us know that this iteration makes their experience better,” said Bill Lentsch, Delta’s senior vice president of airport customer service and airline operations. “We’ll continue to evaluate new processes and technologies to make the customer experience even better.”

Lentch added that Delta wants to transform its gate areas from simple waiting rooms into “an interactive area full of meaningful distractions that keep customers engaged and entertained while they wait,” according to a media statement.