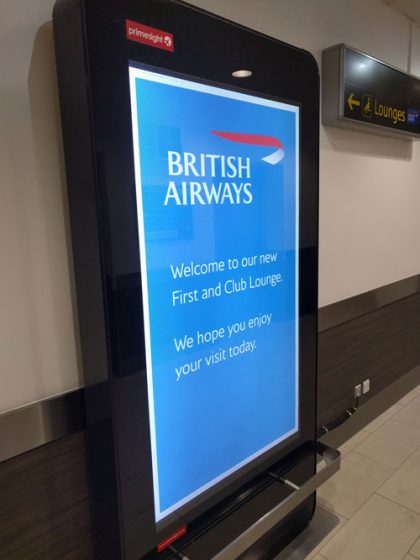 Having missed its planned opening at the end of January, the new British Airways lounge complex at London Gatwick – part of its move to the airport’s South Terminal – is now up and running. This brings to an end the temporary arrangements at the No. 1 lounge and Speedbird lounge that have been in place for the airline’s First and Club World / Europe travellers and Executive Gold / Silver card frequent fliers.

Like its Heathrow equivalent, the lounge complex offers separate spaces for First Class and Gold card holders and Club World / Europe and Silver card holders. We’ll cover them separately as well, but start here with the First lounge.

Before getting to the lounge, there is the new BA check-in, found in Zone A of the South Terminal. Divider screens, lighting, carpet and a row of potted plants have been used to create a premium check-in area. From there, it’s a short walk to the escalators going up, then down the corridor to the ‘Premium Gatwick’ security channel.

That’s where the journey to the lounges becomes slightly more cumbersome. Rather than going down the escalators, look out for the corridor on your left, turning to walk down this instead, remaining on the same floor. Pass the currency exchange and veer to the right, where you’ll find the signs pointing to the lounges overhead, next to the JD Sports store.

Then it’s down another, rather sterile, corridor, through two sets of manual doors – not great with suitcases in tow – until you reach a set of lifts. Take these up to the fifth floor and you’ll be greeted with a large LED screen welcoming you to the new lounges; interestingly, it seems BA has opted not to use its ‘Galleries’ branding at Gatwick.

One further right turn and you’ve arrived at the (combined) lounge entrance. Once through the glass doors, there are two check-in desks, where it’s a left for the First lounge and a right for the Club lounge.

With the exterior walls being full-height windows, the views out over the apron and the runway are excellent and give the space all the daylight it can take.

In the First lounge, the square corner space straight ahead when walking in contains the majority of the casual seating, with armchairs – similar in design to what can be found at Heathrow – in a variety of colours and a mix of leather and fabric. There were also a few sets of stylish swivel chairs in dark blue leather that we had not seen before. Lounge furniture doesn’t have the easiest life, which makes it all the more noticeable that seats and side-tables are still in mint condition.

Double back immediately upon entering and you’ll find yourself in a small area with just four pairs of high-back chairs, half of them in bright pink fabric and half in tan leather, contrasting with the dark wood on the walls.

The rest of the First lounge extends behind reception along the windows, with first the bar / dining area. Dark grey carpet and wood makes way for light tiles here, with a centre bar and a set of contemporary light fixtures above being the focal point. There are bar stools along the window, while bench seating runs along the back wall, which together with individual chairs and marble-topped tables opposite forms the majority of the restaurant seating.

The food and drink offer is very similar to what can be found at Heathrow. The First lounge has both a buffet and waiter menu, with dishes changing based on the time of day. Hot breakfast items (salmon and scrambled eggs, Eggs Benedict) came on different tableware than the usual plain white, in what felt like a step up in presentation – and quality – compared to what we’ve recently seen at Heathrow.

The bench seating continues into the final distinct area, a business centre with work spaces, two computers and printer. Plugs are offered throughout (though teething problems that also caused the opening delay have been mainly electrical, resulting in reports of blocked power points and hot food / water not being available), with UK/EU (but not US) and USB options. WiFi is similar in set up to Heathrow, with rotating passwords on display stands.

Finally, the First lounge has its own toilets, straight ahead on the left when walking in. Rather than the fully individual ‘mini-bathrooms’ found at Heathrow, this is a more traditional set up with vanities in the main area and separate cubicles. Showers are only available in the Club lounge.