Japan Airlines to deploy B787 on Jakarta flights

Japan Airlines will deploy the B787-8 on its Tokyo Narita–Jakarta route starting from January 9, 2017.

JAL currently serves the route two times daily, with one of the return services operated by the B777-300ER and the other by the B767-300ER.

According to routesonline.com, the Dreamliner will replace the B767-300ER that is currently operating flights JL729/JL720. Like the B767, the Dreamliner features a two-class configuration but offers 12 more seats in business (42 in total) and 66 fewer seats in economy (144 in total).

Business class travellers can expect a significant upgrade to the seat. Unlike the recliner seats on the B767, the B787 will offer a more comfortable angle-flat product instead. While the 2-2-2 seating layout remains, the business class seat on the Dreamliner is wider and provides a lengthier pitch.

Service times will remain unchanged. Flight JL729 departs Tokyo Narita at 1800 and arrives in Jakarta at 0010 the following day. The return flight, JL720 takes off from Jakarta at 0645 and touches back down in Narita at 1605. 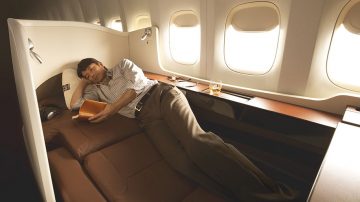 News
JAL to codeshare with Alaska Airlines
16 May 2016