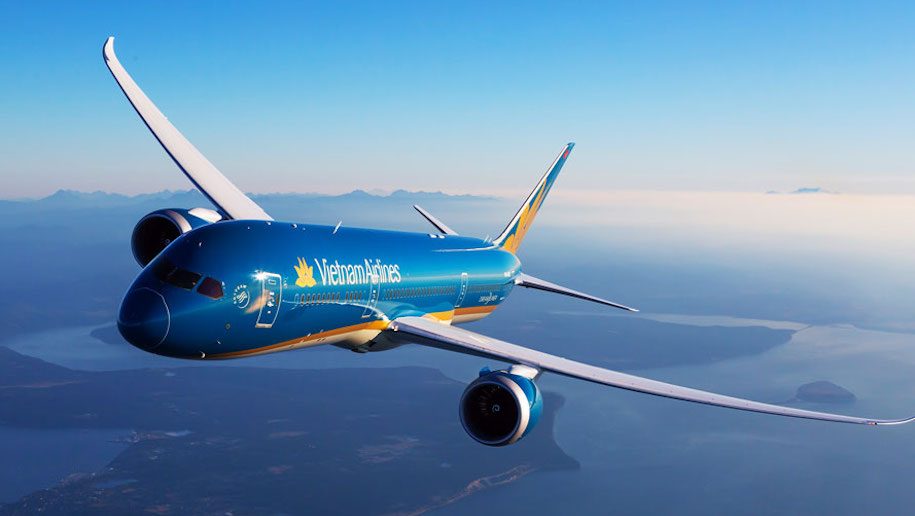 Vietnam Airlines added the B787-9 to its thrice-weekly London-Hanoi route in September.

Flights depart Heathrow T4 on Sundays, Tuesdays and Fridays at 1100 during the winter, arriving at 0515 the next day. The return leaves Hanoi on the same three days at 0105, landing at 0715.

I was transferring in Hanoi from a flight from Danang. After landing at 2125, I took the shuttle bus from the domestic terminal to International Terminal 2.

When I got there at 2200, I went to level three departures and through fast-track security, having already received my boarding pass and through-checked my luggage.

Screening was quick, I took the priority lane at immigration and walked two minutes to the Vietnam Airlines/Skyteam lounge.

The lounge had plenty of seats (it was quiet), showers, a staffed bar, fridges with soft drinks and beer, and a buffet with sandwiches, noodles, fruit, muffins and salad.

There were both departure screens and frequent loud announcements.

I used the Sky Priority lane and took my seat (1K) at the front of the new B787-9, accepting a cold towel and a glass of champagne.

Business class is configured 1-2-1 (A, D-G, K) in a herringbone layout across seven rows.

Each seat is quite private, with outside ones angled towards the window, and middle seats pointing inwards.

The seat connects with an ottoman to form a fully-flat bed. It has a pop-up armrest by the aisle with a secret cupboard next to it, a 15.4-inch HD touchscreen, a USB port and universal power.

The choice of new UK/US films was poor but there were some classics and quite a lot of Vietnamese titles. Slippers, noise-cancelling headphones and an amenity kit were provided.

Row one is closest to the galley so while you get served first, you may be disturbed. All have the same legroom and direct aisle access.

We pushed back on time, with a storm overhead. I have always been a fan of the B787’s electro-chromatic tinted glass windows but after taking off in a thunderstorm I would have preferred to be able to block out what was going on outside. A reassuring announcement from the pilot would have been welcome.

For dinner, there was a choice of two starters (smoked salmon roll with avocado, or prawn with tuna sauce and mango salsa), and three mains – Hue beef noodle soup, Japanese-style grouper and BBQ pork ribs – but nothing vegetarian.

No wine was listed; I asked what the champagne was and was shown a mini bottle of Heidsieck Monopole Blue Top. I had already eaten in the airport, so watched a film before reclining. There was a fair bit of turbulence but overall I slept well on the comfy bed.

At breakfast time, cereal, pastries and fruit were offered along with beef noodle soup; ham, beef and potato salad; or crepe with scrambled egg. I asked if the last of these was vegetarian and the attendant nodded and wrote my request down, but it arrived with a sausage on it.

I spent the rest of the flight working but found it a bit awkward to type as the tray table was too far away. It was also quite narrow.

We landed on time at 0740. Immigration was speedy and my baggage took about ten minutes to appear.

The Dreamliner is a huge improvement on the B777 I flew out on.

The onboard service could have been more informed and confident, though, (the level of English is passable but not amazing), and the food needs to be better – as does the entertainment, which doesn’t do justice to the excellent technology.

Apart from the tray table, the fully-flat business class product is well-designed – it feels private and all passengers have direct aisle access.