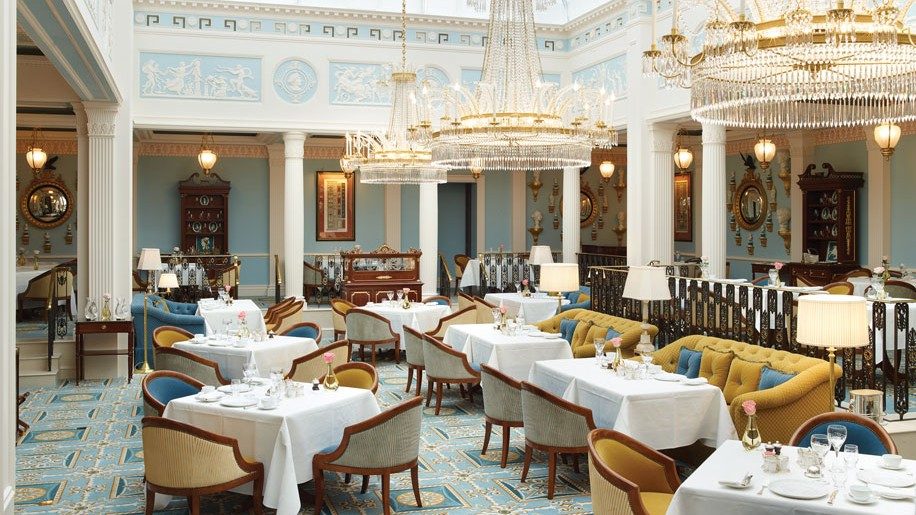 Housed in a building dating from the 1820s and designed by architect William Wilkins (best known for London’s National Gallery), the former St George’s Hospital was converted into a Rosewood Hotel back in 1991, and was subsequently managed by Starwood under its luxury St Regis brand.

The hotel closed for an extensive refurbishment in December 2013 and reopened in 2015 as a member of the Oetker Collection, a collection of five star hotels including Brenners Park-Hotel & Spa, Baden-Baden, Germany, Le Bristol Paris, Hotel du Cap-Eden-Roc and the Palais Namaskar in Palmeraie, Marrakech. Trudging in on a wet November night, I was immediately welcomed at the door, and check in was swiftly completed while sitting in a comfortable chair. Meanwhile two casually but impeccably dressed young Russians chatted in the lobby behind me. The exterior – a combination of classical and Greek-revival styles that marked the Regency period – gives a clue to the interior, as does the Rolls Royce parked outside and the smart doorman who greets you.

The lobby isn’t large, more like a long corridor of a country house, albeit one with Joshua Reynolds portraits hanging on the walls and chandeliers, but shrugging away the design as some kind of Regency pastiche misses the point. The hotel is owned by Abu Dhabi Investment Authority which has spared no expense on its restoration (and it was not too shabby before). Tens of millions have been spent on the design by Alberto Pinto, although he died before the renovation was started.

The chandeliers, for instance, are crystal glass blown in the UK, hand cut and polished by family-run business Wilkinson in Kent. There are 54 of them in the hotel, the largest hanging being two metres across and weighing 200kg (it’s in the restaurant Céleste). They aren’t all the same. The chandeliers in The St George’s Room and The Belgravia Room are inspired by an 1860 chandelier manufactured by Perry & Co of New Bond Street, often found in Royal Palaces.

The interior also has employed British embroiderers, cabinetmakers, bronzers, lacquerers, gilders, mirror specialists, and makers of decorative trimmings. Over 300 people were involved in the renovation of the hotel’s 93 rooms. The ceilings have ceiling roses, coffering, cornicing and fresco painting undertaken by British company Locker & Riley. The gold leaf is just that – 2,100 books of 23 ¼ carat gold leaf were used on the ceilings of public areas and rooms, and 2,000 hours of stencilling on the wood panelling of the rooms has lightened the overall effect (there are 5,500 original stencils) including in The Library Bar, all hand-crafted by Dolby & Taylor. It’s worth walking around the public areas and looking up, there are some lovely trompe l’oeil features including one like a giant tent on the ceiling of the Queen Anne Entrance and stone wall effect along the first floor corridors.

Other British suppliers include Bennison fabrics, George Smith furniture and Brinton’s carpets, while French sourced fabrics companies such as Braquenié, Le Manach, Pierre Frey, Toscan, Verrier, have also been used, along with embroideries in the Royal Suite and the Withdrawing Room by the leading company Linge au Coeur. Italian sourced marble is featured within all of the bathrooms, with each marble slab delicately positioned to ensure the precise matching of grains.

For all of this, it’s not a formal hotel, and though most of the guests I saw during my stay were smartly dressed, many in suits and ties, there were also family groups and couples who were less smart. It’s been ten years since I last stayed at the Lanesborough, and during that time the closure and refurbishment took place under the guidance of the Oetker Collection (see news November 2014).

There are ten room categories among the 93 rooms (43 of which are suites). The hotel’s publicity says “There are five design schemes, with each group consisting of three rich jewel colour ways to create warmth, harmony and comfort.” What’s noticeable is the deep and vibrant colours differ in each of the corridors along the hotel’s four floors of rooms, and the rooms also vary from pale yellows and blues to pale wood with stencilling.

Considering how few rooms there are, there are 14 different types of bed canopies hanging within the rooms, and there are lots of different views, although considering the position on Hyde Park Corner, there aren’t stunning views and many are internal, perhaps reasons enough for the outstanding interiors. The rooms have hand cut marble interiors and Roja toiletries, and all have separate baths and showers. All rooms have 24 hour Butler Service, complimentary high speed wifi, unlimited films and music on demand, and a Sony in-room tablet which can operate everything from the lights to the curtains, as well as acting like a normal tablet allowing you to surf the internet. It’s fairly instinctive, but I still found it difficult to get the lights right, especially since each rooms also had a panel for the lights and in addition some of the table lamps and floor lights also had their own switches, although these could be over ridden by the tablet. Since I was on my own it didn’t matter, but I found that reading in bed I had to have all the room lights on low rather than just having the side table light on (or indeed the reading light above the bed). Perhaps if I’d been staying more than one night I would have worked this out.

All rooms include complimentary pressing of clothing on arrival, tea or coffee served on arrival and with daily wake-up calls (thankfully not compulsory, so I woke up on my own time and went for a run in Hyde Park instead). The hotel has a high percentage of return visitors (guests who have visited in previous incarnations of it being a St Regis or even Rosewood). This seems to be the explanation for the small glass bowls of boiled sweets and mini Toblerone bars, which are incongruous to say the least in rooms that cost several thousand pounds per night. You also get personalised stationery and business cards, which again must be a quirk enjoyed by some guests though I’d struggle to picture who they are.

The hotel’s Library Bar is still very recognisably the same place, though even here there are decorative panels hand-painted in Italy by San Patrignano. It has a pianist in the evenings and a DJ on the weekends after 2130. Celeste is a high end French restaurant which uses predominantly British ingredients under three Michelin-starred Chef Patron Eric Frechon, though it is Florian Favario as executive chef. The room is lovely, with the chandeliers illuminating the delicate pale blue bas relief and Wedgwood china mounted on the walls. The restaurant has one semi private dining room seating up to 12, and two wine-tasting rooms. The hotel has also a drinks and dining area in the Withdrawing Room and a superb Garden Bar which is where you can sample the collection of cigars and Cognacs while sitting outside in a heated and covered area around the back of the hotel (see our feature on cigar bars in London here).

There are several rooms available for meetings, many of which are outstanding examples of the interior decoration of the hotel. The St George’s Room, for instance, has delicate marquetry panelling combined with a leopard skin print carpet. It sounds awful but works well. The largest room is the Belgravia immediately inside the front door which has mirrors of blue Murano glass lining the walls, a pale blue colour scheme and enough room for 90 for dinner. There are seven rooms in total, including the smallest, a wine cellar seating 12. There is a small spa with a couple of treatment rooms and a tiny gym, though this will change in 2016 when a larger facility will open next door and be connected to the hotel.

The Lanesborough is the most expensive hotel in London but when so many tens of millions have been spent on the fixtures, fittings and decoration, it sits on Hyde Park Corner and there’s a butler for every room, value is probably assessed by guests in a different way.

It’s a beautiful hotel, and feels small enough to be intimate without being claustrophobic or too much like a club. I’m not convinced by the technology in the rooms and the tablets, but perhaps regular guests get the hang of it.