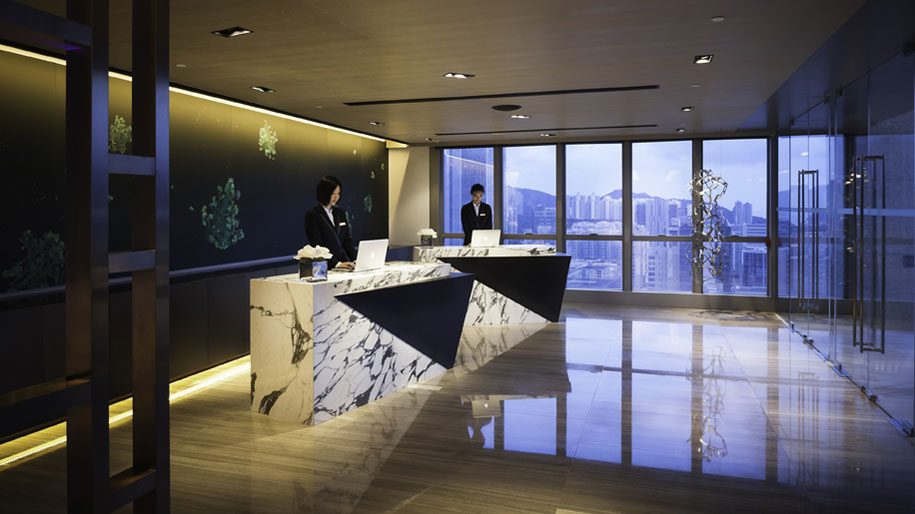 This is a new (opened in July 2012) design-conscious hotel by the Hong Kong-based L’hotel group, which has three other properties in Hong Kong.

A design-centric hotel for business travellers, with lots of new ideas on what they want incorporated into both the service and product elements of the hotel. Initial impressions are positive: this isn’t a mixed-use development, the whole tower is the hotel, and the trendy lobby with its contemporary artwork adorning many of the walls and bird-shaped concierge desk is just somewhere you can drop your luggage as you are whisked up to the top 35th floor reception desk. Here you’ll find a pool deck and wonderful view of the surrounding area looking out over Victoria Harbour as you conduct a paperless check-in. Service is friendly, though at the time of my visit (July) the hotel had only been open for a few weeks and it was still settling down.

In East Kowloon in Kwun Tong, formerly an industrial hub and also where Kai Tak airport was, but now on the rise with buildings such as Manulife Financial Centre and Millennium City including the APM shopping mall. There still isn’t much to do in the area, however, so you will be spending time in taxis or on the MTR to get to the sites or your office – if it’s not in East Kowloon. The hotel is only a five-minute walk from Ngau Tau Kok MTR station but if you are coming in from the airport and using the Airport Express and have luggage, it’s probably best to get off at Kowloon Station and take a taxi the rest of the way (the Airport Express shuttle doesn’t run out this way). Alternatively take the Cityflyer Airport Bus A22 which serves the hotel.

Many of the rooms look across Victoria Bay to Hong Kong Island, though if you have rooms on one side of the hotel you can also see over the site of the old Kai Tak airport which is still waiting to become Hong Kong’s new Cruise Terminal. The 254 rooms are in a few different room categories. There are eight suites on floors 31 and 32 and two duplexes (on floor 31); the rest are standard guestrooms, but divided into three categories or “zones” as the hotel has it: blissful zone (floors 6-20), comfy zone (23-27) and homey zone (28-30). Among these standard rooms are 74 corner rooms (four on each floor) which are more spacious (though some unlucky numbers are omitted), and these cost an additional US$100. There are a total of 53 smoking rooms located on floors 10-13, 27 and one of the suites.

The guestrooms all come with complimentary minibar and free wifi (the suites also have Nespresso machines), an iDocking station and iPads programmed with eGuest systems which allow residents to check in, order food, review their bill and do a self check-out. The work desk is also equipped with an ergonomic and comfortable Herman Miller chair and the bin under the desk has two sections, one for waste and one for recycling – an excellent idea.

I liked a lot about the rooms – the free wifi and minibar, obviously, but also the way that the shower has a wooden floor with drain beneath meaning there is no danger of slipping. Standard rooms have a touch button in the bathroom allowing the window through to the bedroom to switch from opaque to transparent (the first time I’ve seen this), and many of the doors have full-length mirrors to help you have a final check before departing for the day’s work.

The floors are all hardwood, so no dirty carpets, and there are plenty of plugs for various electric items. The lighting system is easily controlled from the bed, so you don’t have to get up again to turn off lights, and the blinds and curtains work on a clever system whereby you just start to open or shut them and an electric motor takes over – though I imagine people will break this by forcing them.

The only restaurant is forte, which has a kind of bar, though it’s more a place to sit at the counter and have a snack to eat. The menu is Asian and Mediterranean, meaning there’s something for most tastes. It’s a little anonymous at present, though the silhouettes of trees and foliage are a nice touch. Breakfast is also here, with a fair selection of hot and cold food. What the hotel lacks is a bar with a view – and it knows it. In recompense, they have put a table and some chairs in one corner of the top floor next to the fitness centre. The problem here is that if you use the gym in the evening you are sharing it with people who are relaxing after the day and sipping complimentary teas, coffees and soft drinks. One night a couple were sitting on a pile of gym mats looking out at the fabulous view as the sun set. I’m sure it would have been romantic if not for me on the exercise bike next to them. What the hotel should do is put a bar up on the 35th floor and move the gym somewhere else.

There is no business centre, but on the third floor there are two meeting rooms – élan 220 and élan 120, with a capacity for 150 and 70 people respectively. The former looks out over the terrace and has an illuminated LED arch display as an event backdrop.

There is a small pool on the top floor – more for cooling off in summer than any exercise, and the already-mentioned small 24-hour gym.

This isn’t a location for the first-time visitor to Hong Kong, but if you’re happy using the MTR and have an office on Hong Kong Island, it’s surprisingly quick and easy to get around, and good value with all the latest creature comforts and design elements.

HOW MANY ROOMS? 254 in total with eight suites, two duplex rooms and 74 corner rooms. The rest are in three categories: Blissful, comfy and homey.

PRICE: The internet rate for a standard room midweek in October is HK$1,750 (US$226) including breakfast and taxes.