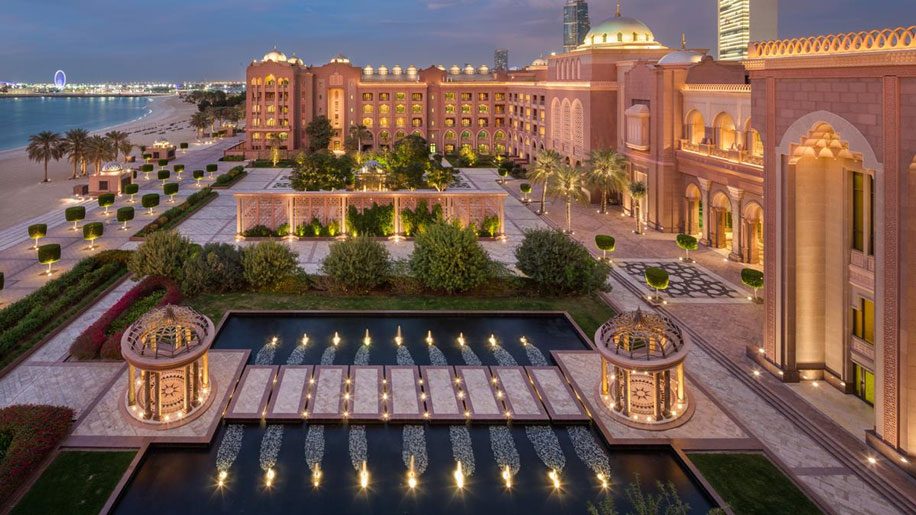 You can’t arrive at this hotel without preconceptions: Abu Dhabi’s answer to the Burj Al Arab, or the Emirate’s first shot in a concerted campaign to woo tourists to the destination. At the very least, it’s a building that dominates the corniche of Abu Dhabi City.

Owned by the government and operated by Kempinski, it took four years to build and opened in February 2005. However, the spa is yet to be completed and restaurants are still being added (since my visit in March, two new restaurants have opened).

If you’re part of a government delegation you head through the huge corner gatehouse and straight up a ramp to the fifth floor of the hotel. If you’re just a normal millionaire, you are driven a little further around the perimeter, then in through security, round the fountains, past a cascade of steps and up to the fourth floor reception.

To your left will be a white Rolls Royce and a white Maybach limousine, available for private transfers to and from anywhere you are prepared to pay to go (US$681), if you fancy popping over to Dubai).

To your right will be several liveried helpers, the first of a couple of dozen employees who will welcome you into the lobby of the hotel, check you in and eventually escort you to your room, first of all pausing so you can admire the central dome of the palace (there are 114 domes in all), which is 60 metres high, and 42 metres wide with a surface finish of silver and gold-coloured glass mosaic tiles.

Inside, the colours are less ostentatious than those of the Burj,modelled on the yellows and dark reds of the desert. Instead, it’s the size that astonishes: over 110,000 sqm of marble was used and, walking end to end, you’d cover over 1km.

There are 1,002 chandeliers made with Swarovski’s Strauss crystals, two helicopter pads, 140 lifts (even though at its tallest the hotel is only eight storeys), 128 kitchens and pantries, and 755 flat-screen TVs, and every public area has giant screens ready for any important sporting or political event. The hotel sits in 85 hectares of gardens and has 1.3km of beach front.

The hotel is effectively divided into three parts: the central palace, containing palace suites, restaurants and bars (where a dress code of smart casual is enforced); and, beneath, the ballroom and auditorium.

The top floor of the palace is reserved for government officials (they could be staying while you are there but you would never know it), while everyone else populates the east and west wings of the hotel.

Each wing has a beach club, pool area, restaurant and spa, plus its own check-in and reception, so you can avoid having to dress suitably to access the main palace. The wings are also suitable for business travellers, with all 302 rooms and 92 suites having Wi-Fi (it’s free throughout the hotel and the grounds –even the beach).

So much for the layout. What is it like staying there? The service is superb; each room comes with its own butler.  When I arrived, I had 45 minutes before a meeting and my suit needed pressing. One call to the butler and this was done, arriving back at my room in 30 minutes (two pieces are pressed complimentary, so there was no charge for this).

All soft drinks in the minibar are free, as were the bottles of water that appeared in my room several times a day.  Along with wifi, these are things that normally are added to your bill, though obviously it’s still a splash out place to stay.

Some are still in the process of opening, but at the time of my visit (early March) options included Sayad for European seafood with an Asian touch, and Le Vendome Brasserie for indoor or outdoor terrace dining.

Yes, of every shape and size including a ballroom capable of holding up to 2,800 people, and a giant auditorium.

There are two spas, both scheduled to open towards the end of this year.

Contrary to many expectations, there’s a genuinely good five-star hotel in Emirates Palace, and one well worth trying –at the very least you’ll have plenty to talk about during business trips to Abu Dhabi.

Internet rates for a midweek stay in April started at US$598 for a Coral room (room only), rising to US$689 for a Diamond room (room only) and US$2,614 for a Khalee junior suite, including breakfast.