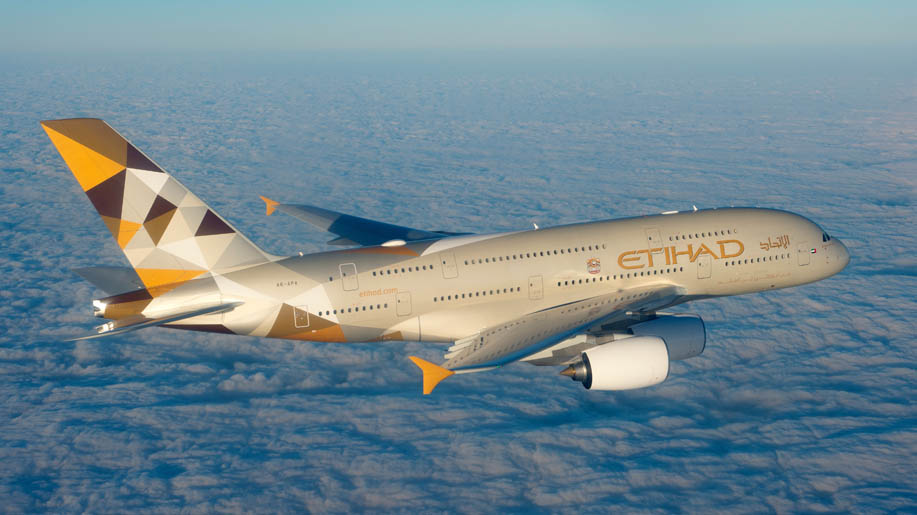 BACKGROUND Etihad Airways operates two non-stop flights a day between Abu Dhabi (AUH) and New York (JFK). I flew on EY 101 that departs AUH at 1015 and arrives at JFK at 1620. It operates its A380 for this service.

CHECK-IN Since I was flying from Mumbai, I checked-in my luggage at Chhatrapati Shivaji International Airport’s Terminal 2. After landing at Abu Dhabi (AUH), I relaxed for a few hours at Etihad Airways Business Class Lounge accessible to its business and first class guests at Terminal 3, close to gate 35 (there is another one at Terminal 1). As a passenger of Etihad Airways, I was allowed to process my immigration and customs for America through the United States Customs and Border Protection (CBP) facility at Abu Dhabi airport. There is a dedicated US Premium Lounge after the clearance that invites first and business class passengers travelling to the US. This lounge is much smaller but has similar F&B as the lounge at Terminal 3.

BOARDING Boarding was smooth into the colossal A380’s upper deck that houses 70 business and ten first class cabins, The Residence (an exclusive three-room cabin) and The Lobby (an intimate six-seater lounge fitted with seat belts, power supply and connectivity ports). I was greeted with pleasantries and offered juice, lemon mint or champagne upon boarding. A menu card for food and drinks was presented soon after. Departure was delayed by 15 minutes because of cargo loading.

THE SEAT Business Studios, a term coined for Etihad’s business class, are configured as 1-2-1 and dovetail each other. My Business Studio 10A felt like a tranquil nook in the sky. A two-mode lamp, a large cushion with Etihad’s colours and a chenille fleece-lined blanket are some of its offerings. Subtle shades of brown and gold decorate the space that has a lot of stowage including a compartment for shoes. My window seat had two compartments beside the window; one stored headphones and water bottles, and the other had a LUXE amenity kit that features Scaramouche + Fandango lip-balm and moisturiser, dental kit, eye-mask, earplugs and socks. A sleep-suit along with slippers is also placed in a cloth bag here. The seat is electronically controlled through a panel next to the 18-inch television screen. There are various permutations and combinations including options for massage, cushion firmness and mood-lighting. There is a sliding door that allows privacy while sleeping. Etihad’s E-BOX Inflight Entertainment has a number of live channels, an extensive e-library, a variety of cinema and music that can be controlled through a detachable remote control. The seat has two USB ports and a main socket for UK, US and EU plugs. Windows are electronically controlled and have two shades.

WHICH SEAT TO CHOOSE? Since seats dovetail each other, it’s advisable to pick one that faces the direction of flight to avoid feeling disoriented.

THE FLIGHT A stewardess introduced herself and took my food and drinks order as soon as we took off. I asked for my meal immediately since I hoped to sleep after eating. Etihad has an all-day menu on this long-haul flight that features pastries, cereal, omelette, a steak sandwich and masala dosa (Indian crepes). For my appetiser I picked the smoked salmon with potato, red chard, beans, olives and crème frâiche. From my main course I opted for the chicken breast with spelt and white bean cassoulet, spinach and lemon. Later, I enjoyed the sinful sticky toffee pudding with butterscotch sauce with an espresso as I watched a documentary on Warren Buffet. I spent an hour at The Lobby, the intimate lounge located between business and first class that features two comfortable sofas and a staffed bar. I also enjoyed Billecart-Salmon NV Brut Champagne over another movie before I changed into my sleep-suit, flattened my seat (180-degrees) and slept until an hour before landing.

ARRIVAL Etihad Airways’ pre-clearance at its hub made my arrival at New York International Airport a breeze at 1620. I left the airport as a domestic passenger.

VERDICT Etihad Airways’ A380 is the ultimate grandeur in the air. A long haul flight to the States was made comfortable and luxurious its amenities and services. 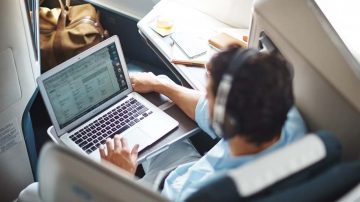 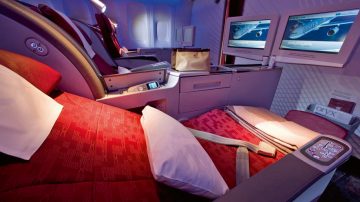 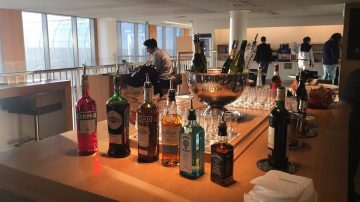