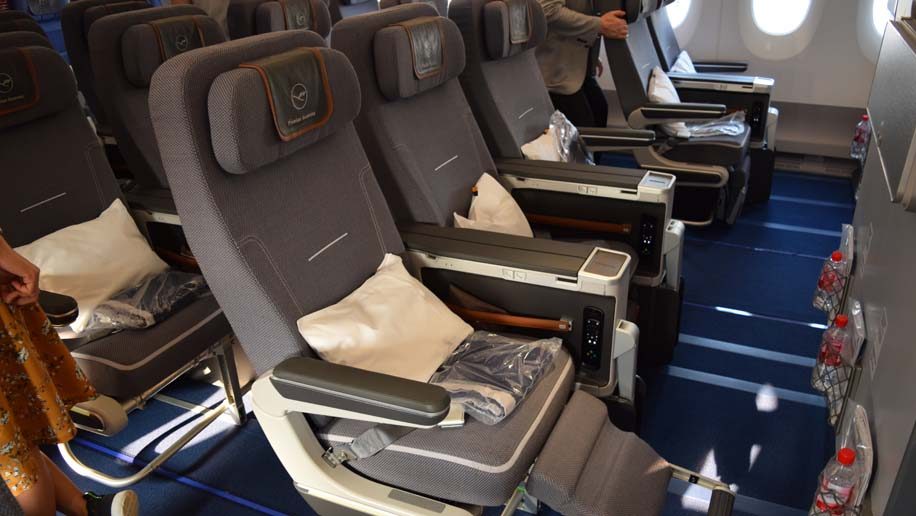 As reported by Business Traveller last year (see news, December 11), the new seat will be introduced onto the German carrier’s long-haul fleet from November, initially on the Boeing 747-8.

It will then be retrofitted on the rest of its long-haul fleet by summer 2015 and on all new deliveries. The new seats will be located in a “clearly identifiable” separate premium economy compartment between business and economy. Each premium economy area will contain between 21 and 52 seats, depending on the aircraft type.

Again depending on the aircraft, the seats will be up to three centimetres wider and have approximately ten centimetres more room at the side as each one has its own wide armrest and a centre console between the seats.

The new seat is aimed squarely at business travellers as 70 per cent of these currently fly economy, the airline said, while its premium economy ticket prices will be “closer to economy class then business class – a return flight across the North Atlantic or to Asia will cost an additional 600 euros on average”.

Jens Bischof, the airline’s chief commercial officer, said: “Following the upgrade of our first and business class, the installation of 3,600 seats on all 106 of our long-haul aircraft in just one year will mean another step towards becoming a five-star airline.

“We expect to see more than 1.5 million passengers per year in our new premium economy class.” Lufthansa’s premium economy seat and cabin will be laid-out as follows:

The seats have been ordered from Germany seat manufacturer ZIM Flugsitz GmbH. The firm also works with Lantal on its premium economy seats, which already supplies Lufthansa, Swiss and Brussels with its Pneumatic Comfort System for those airlines’ business class seating.

While the seat will be branded as premium economy, it will be classed as economy within the booking system and will not carry benefits such as a dedicated check-in.

The seat will be retrofitted across Lufthansa’s long-haul fleet along with the carrier’s new fully-flat business class seats (for a review of the new seat on the B747-8, click here). Seatplan: How premium economy (centre) will look between business (left) and economy (right) on Lufthansa’s B747-8 It is planned for the retrofit of both seats to be completed across the long-haul fleet by the end of next year.

That includes the A380 – the airline currently has ten superjumbos, which will be retrofitted with the new premium economy and business seats, while all future A380 deliveries will also have them. The new business class will be introduced on the A380s from next year.

It hasn’t yet been confirmed where premium economy will be situated on the A380, but Christian Schindler, Lufthansa’s director for the UK and Ireland, recently told Business Traveller that all the superjumbos would have the same configuration.

NB: Check-in and boarding procedures as well as hand luggage regulations are the same as in economy.