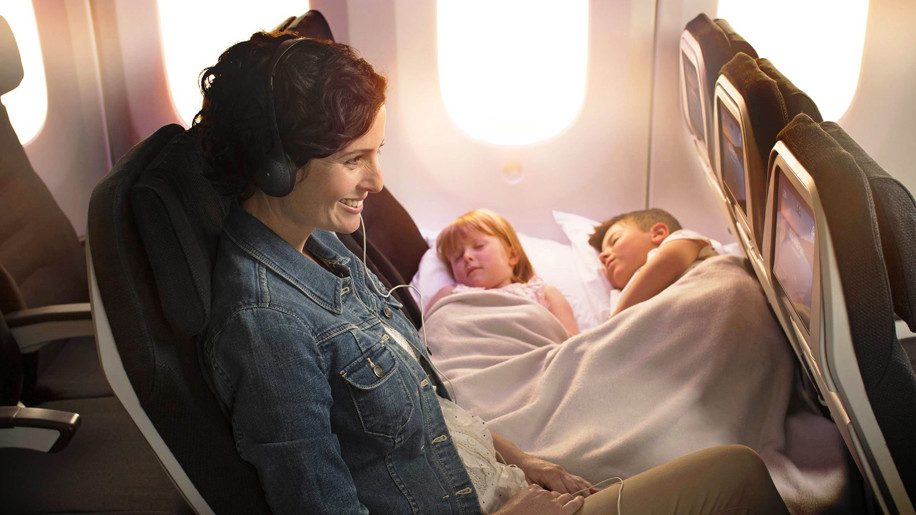 Air New Zealand’s economy Skycouch has divided opinion since its unveiling last week (see online news January 26). Depending on who you talk to, the idea of buying three seats that can be converted into a flat sleeping surface is either innovative or an expensive gimmick.

But the more critical out there have highlighted ANZ’s decision to adopt a 3-4-3 row configuration throughout the economy cabin on its new fleet of B777-300ER, the first of which will enter service in December this year.

The ten across configuration has proved unpopular among airline passengers. Emirates for example has 3-4-3 on its A380s, B777-200, -200LRs, -300s and -300ERs. While the A380 may be wide enough to fit that number of seats across without impacting on individual seat width, according to reviews left by passengers on our sister website seatplans.com, the 3-4-3 set-up on the B777-200 and -300 has resulted in 16.5-17.5 inch seats that are “narrow and pitch poor”, and aisles that are “too small to wheel a carry-on through”.

Now ANZ has made the controversial decision to go for ten across on the B777-300ER, one seat extra per row than on the closest comparable aircraft already in its fleet, the B777-200ER. The newly designed economy product, at 17.1 inches wide, is more than half an inch narrower than the current seat on the -200ER, at 17.8 inches wide.

Ed Sims, ANZ’s group general manager international airlines, says that he has “spent quite a lot of time flying on Emirates economy in preparation for the conversation on 3-4-3.”

It seems ANZ fully expected to raise a few eyebrows. “Yes it is four in a row, like on Emirates,” Sims admits, “but our service flow will be so fundamentally different that we won’t trap people in the seat and give people the same sense of claustrophobia. We have spent a lot time studying Emirates’ service.”

Sims argues that this feeling of being trapped is heightened if passengers see service carts blocking the aisles and if empty meal trays are left for too long. “You’ve got the table down and you’re stuck in your seat,” says Sims.

To answer this, ANZ has created a new type of “half cart” for cabin crew that is narrower and takes up less aisle space, which Sims argues will prevent that trapped feeling, and also speed up a “more personal, plated” meal service. This is also handy given that the aisles on the new aircraft will be around an inch narrower in the economy cabin, freeing up more space to squeeze in that extra seat.

Sims says: “The service is more economical and there’s an easier flow in a narrower aisle. That’s effectively where the forth seat in the middle has been created from. Aisle width and the greater fuselage width of the -300 compared to the -200.”

Other innovations that Sims says will make the difference between its economy product and that of other airlines using the 3-4-3 configuration include new in-seat trinket trays, bottle holders, USB and power ports. These, Sims argues, will stop passengers from piling books, MP3 players and drinks on their seat tables, freeing up more room and lessening any feelings of claustrophobia.

But down to the nitty gritty. The Skycouch is basically three adjoining economy seats with the third sold at half price. With 22 Skycouches on each B777-300ER, that’s 22 economy seats potentially commanding only half their normal fare. Taking it one step further, that’s a potential for lost revenue on as many as 11 economy seats per aircraft, depending on how popular the Skycouch is of course. Suddenly the extra seat per row makes perfect sense. It seems that ANZ is stuck in a tricky position, of introducing the Skycouch, an innovation it hopes will appeal to families and couples, but at the expense of seat revenues. Without the extra seat in each row ANZ would be forced to increase economy fares in order to maintain its cash flow. “One of the questions I was asked about Skycouch is whether we’re making economy travel more expensive overall. One of the answers to that is why we’ve gone ten abreast,” Sims says.

“We carry a lot of backpackers. We carry a lot of European traffic, in particular a lot of Germans who are very price conscious, as we do out of the UK. We wanted to make sure that we didn’t price ourselves out of that lowest economy market.”

The more cynical ones out there might question the introduction of the Skycouch at all if it means either upping economy fares or squeezing in an extra seat to offset lost revenue. This begs the question, is the Skycouch just a way of distracting people from the fact ANZ has added in around 25 extra economy seats per aircraft?

“Clearly, we want to make economy as commercially viable for ourselves as we can, so clearly we want to sell the extra seat,” Sims says. “The ability to have ten across partly enables us to look at the commercial equation of the Skycouch, and selling a third seat at half price, and to make that more viable. So one offsets the other.”

Another criticism of the Skycouch is the implication that it is a proper full-flat bed in economy for stretching out on, when the figures just don’t add up. At 17.1 inches wide, three economy seats together would be just over four feet across. Add to this the gap between seats and space for armrests, and official figures from ANZ put the Skycouch at 1.56 metres long, or five feet one inch.

Sleeping on the Skycouch is possible, if you don’t mind sleeping with your head raised on a pillow or on your side with your legs curled up towards you. And to be fair to ANZ it is a completely flat surface, unlike the sometimes troublesome angled lie-flats or cradle-style seats found in the business class cabins of some airlines.

But Sims points out: “We’ve never called it a bed. That’s why we called it a couch. On a Sunday afternoon watching the football, a sofa is a pretty comfortable place to curl up on, but no-one designs sofas for sleeping on. You can sleep on your couch, but we’ve never gone out of our way to say that it’s anything like an equivalent sleep in Business Premier, because it isn’t, it wont be, and that’s why they’re quite different prices.”

For one person buying the three Skycouch seats it would be more expensive than premium economy, but cheaper than Business Premier. According to ANZ, the Skycouch will cost NZ$200 on top of the current price of two economy seats, plus the third seat at 50 per cent. Based on today’s prices, Auckland to Los Angeles on a Skycouch, one way mid-week in February, would cost NZ$3889 (£1,706). Compare this to the same flight in Premium Economy at NZ$3,067 (£1,345) and Business Premier, a true flat bed, at $6,057 (£2,656).

“If you asked me where you’d get the best sleep, it would be the Business Premier without a shadow of a doubt,” Sims added finally.

Whatever your views on the 3-4-3 layout in economy, it appears that the majority of business travellers think that the new Skycouch offering will be successful. A total of 647 travellers responded to our recent poll, with over two-thirds (68.3 per cent) saying that they thought the new seating will be a success.