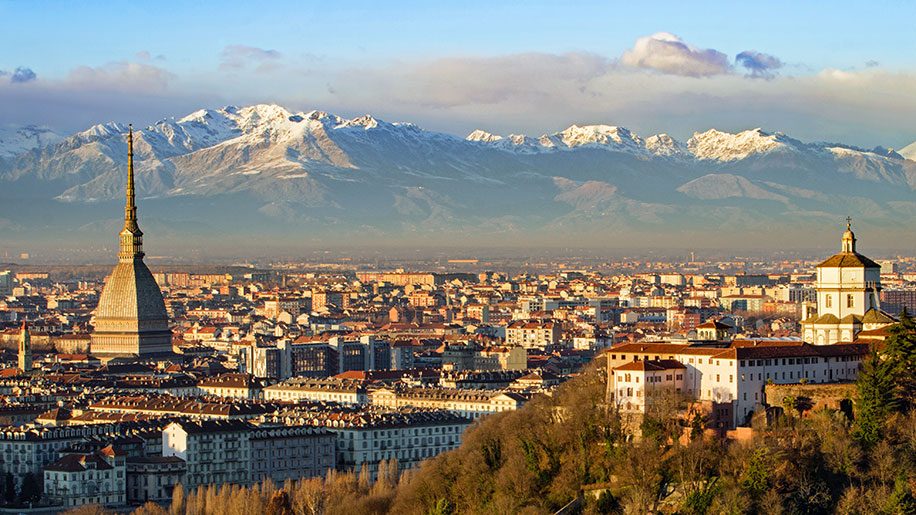 The last time Turin got any serious attention was when Michael Caine’s Mini Coopers tarmac-trashed its streets in The Italian Job. Since then, despite its elegant arcades, gorgeous baroque architecture, famous coffee houses and colourful history, the city’s image has remained defiantly unloved.

Set astride the Po River, this highly walkable city has a refreshingly gritty, down-to-earth atmosphere. But you won’t see coach loads of tourists. Instead, zippy new super-trams snake along the stately grid of wide avenues. Uniformity is what strikes you first. Roads are as straight as a die and roof-tops neatly levelled off. Even the graffiti looks well ordered, as if following invisible straight lines in an outsized exercise book.

Yet there are also striking baroque townhouses, palaces and churches, facades painted in ice-cream colours, all a legacy of Turin’s first major facelift back in the mid 1500s. That century saw military whizz-kid Emanuele the “Iron-Head” Filiberto of Savoy, descendant of one of Europe’s oldest ruling houses, set about transforming what had been a strategically vital, yet minor medieval university town into a well fortified, good looking city.  After driving the French and Spanish troops from his territory in Piedmont and Savoy, moving the Savoy capital to Turin from Chambery was easy. It began a transformation which reached its pinnacle when, 300 years later, Turin was the first, albeit short-lived capital of a united Italy.

For a sense of the Savoys’ innate love of Baroque bling, head for the historic centre, where dazzlingly over-dressed churches like the Madonna della Consolata vie with grandiose former royal residences. The flashily curvaceous red-brick Palazzo Carignano (site of the first Italian parliament) and the sternly masculine Palazzo Reale give some idea of the breadth of showiness favoured by architects working here during Turin’s heyday.

You can wander into any number of these palazzi, many of which stage guided tours, though admittedly mostly in Italian. But if pressed for time, the extraordinary Palazzo Madama on Piazza Castello (“Not a square, Arthur, a piazza” – as Charlie Croker, Michael Caine’s cockney antihero, reminds an underling) provides a synthesis in stone of the city’s history, from the Roman period to the Risorgimento. There’s a baroque facade by architect Juvarra, and a backside that looks like a medieval castle. Within are the remains of one of Turin’s old Roman gates, while upstairs, highly gilded ballrooms and bedrooms lead off from a wildly extravagant sculpture-encrusted staircase.

Modern-day Turinese seem more proud of their “portici” than their palazzi, though. These elegant arcades run for 18km throughout the centre of the city, graceful reminders of the days when spoilt monarchs paraded the streets without fear of a speck of rain, dust, or colour-bleaching sunlight spoiling their clothes. Much in use nowadays during the early evening passeggiata, or walk, they are lined with bookstores, boutiques, chocolate shops and, pride of place, Turin’s famous 19th century coffee houses (see box).

There are new attractions. A skyline of cranes cradles a freshly-scrubbed centro storico as urban regeneration projects prepare the way for sleek new sports venues, hip restaurants, extra hotels, and Turin’s first underground system. A 10-minute taxi ride away, glass lifts convey guests to industrial-chic, Philippe Starck-furnished bedrooms at Le Meridien Turin Art+Tech – Turin’s newest five-star hotel. Alongside its sister hotel, Le Meridien, the Art+Tech forms part of architect Renzo Piano’s re-vamping of the Lingotto Complex, home of the old Fiat factory whose flat roof provided a backdrop for some daring Mini Cooper antics in the movie.
The last car rolled out of the factory in 1982, when production moved to the more spacious Mirafiori plant, and Piano won the competition to regenerate Lingotto into a playful, functional complex of shopping malls, hotels, cafes and gardens.

Lingotto is still very much a lived-in working class district, and Piano had to tone down his initial vision of chic luxury-end boutiques. Ten years on, and supermarkets, cinemas and high street stores now mix harmoniously with the more hip open-space environment of the Art+Tech, and the complex has become a well-loved and vibrant place for all.

This lively regeneration of a defunct industrial suburb can only go from strength to strength, with the imminent emergence here of several Olympic venues. For now, however, Lingotto displays quintessential Italian design flair, and Turin’s newly favoured convention centre is home to the celebrated international Slow Food Fair, as well as numerous exhibitions and concerts. Noteworthy, too, is the glass and metal Piano-designed “jewel casket” of the Pinacoteca Giovanni Marella Agnelli, showing part of the Fiat dynasty’s art collection – and La Bolla, the spacious glass bubble meeting room with its glorious alpine and city views, set astride the factory roof.

Outside, the old kilometre-long Fiat test track that starred in The Italian Job has now become a jogging trail for hotel guests, though perhaps a more stylish, albeit lazier way to enjoy the oval circuit would be to copy Caine’s crew, and head off in a Mini Cooper.

London to Turin Served from Gatwick by British Airways. Also served by Easyjet from Luton and by Ryanair from Stansted.  Return fares with BA:  Club Europe price ranges from £184 to £556, economy class from £81. Return fares with Easyjet typically start at £56, with Ryanair £40.

Turin’s coffee houses are tiny jewel-like salons, tricked out with wood panelled interiors, gilded mirrors, chandeliers and marble-topped tables. One of the most elegant is Baratti & Milano (opposite Piazza Castello). Stop here for a cream-filled bignole pastry and a bicerin, the city’s own take on hot chocolate mixed with expresso and cream. Or, for a flavour of Vienna, neighbouring Mulassano, with its Secession décor, has the best tramezzini — and even boasts of being the first establishment to have invented the Italian sandwich.

At 7pm — aperitivi hour —?coffee houses come into their own. Vermouth is a local tipple — an 18th century brew born in a distillery under the Piazza Castello arcades. It figures in most house aperitivi, or choose a cocktail, prosecco, a bitter Punt e Mes, or Arneis, the favoured light Piedmont white wine. And for the price of that drink, you can feast on delicious stuzzichini, Turinese tapas, spanning hot fritters of salt cod and rice, tiny salami brioche and savoury pizzette to ham and cheese straws and miniature mountains of cured ham.

Turin’s restaurant scene emphasises regional specialties. The Quadrilatero district that backs onto the wonderful Repubblica food market has been transformed from edgy-seedy to edgy-cool. Among the hip late night bars favoured by young Turinese, the Tre Galli, in pedestrianised Via Sant’Agostino, offers a great lunch spot with outdoor tables. Platters of local charcuterie precede regional pastas, and are served with Piedmontese wines. For a more formal dinner, the bare-brick meets brushed steel and glass space of Babette restaurant, on Via Alfieri, is considered uber-cool, and serves modern takes on hearty Turinese specialties.

Pepinos, opposite the Palazzo Carignano, is a charming café-gelateria, with good buffet lunches of pastas and grilled vegetables. It’s the perfect pit-stop after the Egyptian museum which is ranked as one of the biggest collections of Egyptian artefacts this side of Cairo.