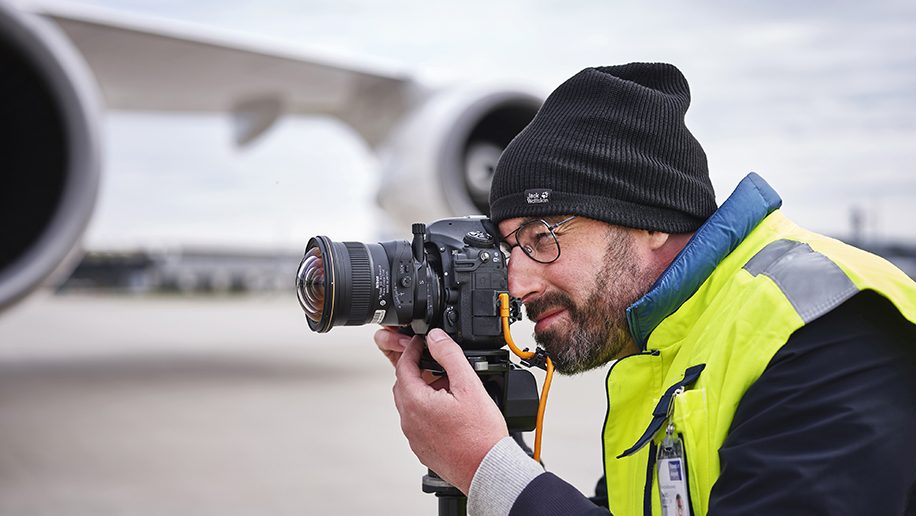 What attracted you to aviation photography?

When I started, I had no idea it could be a career. I was geeking out at Toronto Pearson Airport, taking photos of planes overhead just before they touched down. What fascinated me were the details on the plane, such as the pattern of rivets, the joinery detail of the wing to fuselage, and the wiring under the flaps and slats.

After a couple years of putting the photos on social media, my photos caught the attention of Lufthansa, and I got an email from them asking if I’d like to work with them. Ever since then it’s turned into a fantastic career, and I’ve been able to work with some incredible airlines and airports around the globe.

What makes a perfect shot of an aircraft?

To me, an airplane is like a work of art – a flying sculpture, and that’s how I like to photograph them. I like capturing the graphic quality of the airplane’s design, with it gracious curves and strong lines. The perfect shot is a mix of graphic design, and photography, and an image that still inspires the wonderment of flight.

Which shoot left a lasting impression?

I did a shoot for Lufthansa just before the pandemic, photographing their fleet of planes in the new livery. To get some of the overhead shots I wanted, we were in a cherry picker 30m above the plane. I remember being very nervous about changing lenses at that height right above the nose of an A380.

I also directed the ground crew to move the plane so we could get better light. Not many people can say they’ve been able to get an A380 to turn around, just because they want it to.

Is it challenging to travel with photography equipment?

The idea of missing a shoot because of lost luggage terrifies me, so I have all my camera gear in a carry-on suitcase. If I need to get additional equipment for a shoot, such as lighting, I rent it at the destination. It’s easier that way for both logistics and peace of mind.

The 747. To me it’s iconic for many reasons. Apart from being the first plane I flew on as a child, it’s a plane that made the world smaller and allowed people to easily travel around the globe. Its design is instantly recognizable – we can all tell it’s a 747 from that top deck and nose.

And I was fortunate to photograph the delivery flight of the Lufthansa retro livery 747 a few years ago, so that plane will always be close to my heart. Though there aren’t many 747s flying these days, it will always be The Queen of the Skies.

There is something magical about Singapore Changi airport. The futuristic architecture of the airport is jaw dropping. And I love that it has so many plants included in the interior design, so when you disembark from your plane, it really is a breath of fresh air inside the airport.

Where did you last travel to?

Last month I did a shoot with Air France in Paris, and it was incredible to travel long haul again. The service and attention to detail during the flight was spectacular. And the design of the cabin is so well considered, thoughtful, and just so perfectly French.

A surprise highlight of the trip was their new lounge 2F, which had attendants wheeling around a cart offering passengers Champagne and fresh crêpes. Such a clever way to showcase the connection between food, wine, and travel.

How did the pandemic affect your line of work?

Things got very quiet, as it did for anyone in the travel and aviation business. But as the saying goes ‘never waste a crisis’ and it was a great time to learn something new, focus on existing client relationships, and also make new connections.

So, I taught myself how to do video work, I’ve signed on with a photo agency, and now that restrictions are easing, things are getting very busy again.

When I was young, I used my pocket money to buy my first camera from the duty free store at Schiphol airport for a trip to visit family in South Africa. It was my first camera – a simple point and shoot.

I remember the excitement of capturing moments, sights and landscapes, and the anticipation of getting film rolls developed. The cameras have changed over the years, but that thrill is a constant on every trip.

Language can sometimes be a challenge – but thank goodness for Google translate. A few years ago, I spent a morning with a taxi driver in Santiago, Chile touring about, while we passed my phone back and forth so that we could understand each other.

Neither of us spoke the other’s language, but we got along great, and had a fun time exploring the city together.

I’m fascinated with all sorts of transportation, so I would love to ride and photograph the travel experience on epic train journeys of the Orient-Express, Rovos Rail or The Royal Scotsman.

My Air Canada amenity kit bag. It’s an easy and stylish way of storing and organising all the ‘tech wiring’ such as plugs, adapters, chargers, etc., that we all need to bring with us when we travel.

A window seat view is my happy place. It’s the best form of relaxation – from the thrill of the take-off and landing to just staring out the window watching the clouds pass by.