Hong Kong’s flag carrier said in a media statement on Tuesday that it would “progressively” reduce the capacity of its flights to and from mainland China by 50 per cent or more from January 30 until the end of March 2020, following the Government Response Plan and “in view of market demand”.

Meanwhile, Hong Kong Airlines said it would cut flights between January 30 and February 11 in light of the plan to address the spread of the coronavirus. The airline is cutting flights to and from Haikou, Sanya, Nanjing, Shanghai Pudong, Shanghai Hongqiao, Beijing, Tianjin, Chengdu, Chongqing and Guiyang.

The Hong Kong government announced its response plan on Tuesday, which includes a number of border control measures such as cutting flights to and from the mainland by half, and suspending high-speed trains and ferries that cross the border.

People travelling individually to Hong Kong from the mainland will also no longer be able to receive permits to visit the city. The restrictions will take effect starting from midnight on Thursday.

The six checkpoints to be closed from Thursday are Hung Hom, West Kowloon, Sha Tau Kok, Man Kam To, the China Ferry Terminal and the Tuen Mun Ferry Terminal, according to South China Morning Post.

Both airlines said rebooking, rerouting and refund charges will be waived for all tickets issued worldwide for flights arriving and departing from Mainland China.

Chinese authorities first alerted the World Health Organisation (WHO) to a number of pneumonia-like cases in Wuhan, a city of 11 million people, last month. The WHO identified it as a new coronavirus, a large group of viruses common among animals. Common signs of infection include respiratory symptoms, fever, cough, shortness of breath and breathing difficulties.

The death toll in China from the new coronavirus has risen to 132 with new cases reaching nearly 6,052 as of today, according to South China Morning Post.

All public transport in and out of Wuhan, including trains, buses and ferries, stopped at 1000 on Thursday last week after the Chinese government imposed a quarantine to try to curb the spread of the coronavirus.

Cathay Pacific, including its subsidiary Cathay Dragon, flies to 20 destinations in China, including Wuhan where the virus originated. The airline announced last week that it would suspend flights to and from Wuhan between January 24 and February 29. 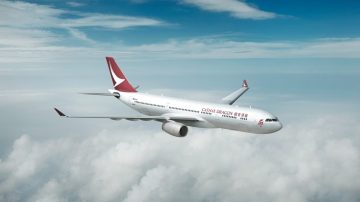