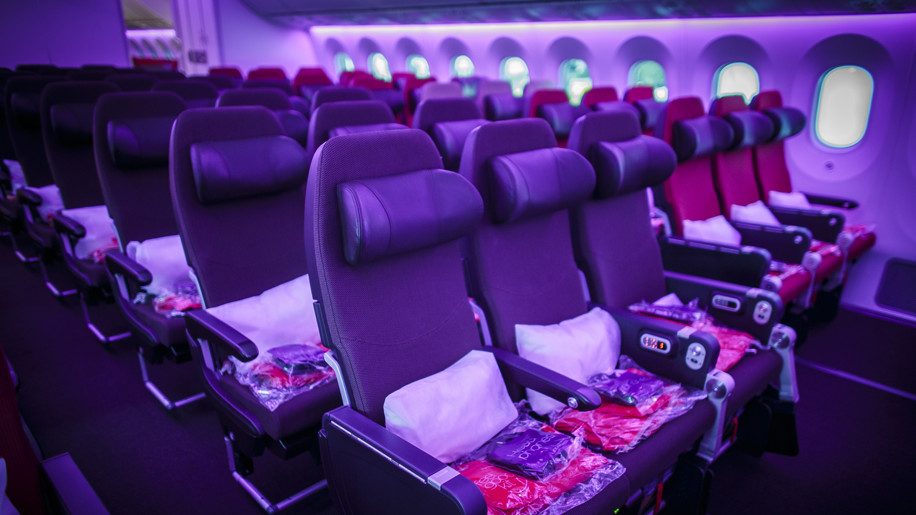 I checked in online for my Virgin Atlantic flight from Miami to London Heathrow on the morning before my departure, which was scheduled for 2115. I accepted my assigned seat (45G) and had my boarding pass sent to my phone.

If you want to pre-select a seat with Virgin Atlantic more than 24 hours before departure (when it is free), you have to pay from £25 for an economy class seat (unless on a Y or B ticket). Extra-legroom/exit row seats cost from £35 one-way.

I set off for Miami International at 1800, allowing a bit of leeway for if the traffic was bad. It was fine, as it turned out, and I arrived at 1825, with the taxi dropping me off at Concourse F (the one assigned to Virgin).

There was no one waiting at check-in so I was able to check my suitcase in swiftly – once it had been weighed and tagged, and I had been issued with a paper boarding pass, I then had to take it to a separate X-ray area next to door, where a member of staff put it on a conveyor and whizzed it off for processing.

I then had to pass through another lane leading to gates F3-23 with documentation checked en route. After this point there was a dingy, badly organised security area with a long queue, grubby carpeting and a sloping floor. It was well staffed but rather chaotic. Liquids and laptops came out, and jackets, belts and shoes came off. All passengers also had to be given a full body scan or search.

I was airside, down a set of escalators into a miserable departure lounge, at 1915. It was one of the worst airports I have seen outside of India – old but made worse by being dirty and with pitiful duty-free and dining options. The only good thing was being able to get 30 minutes of free wifi and having access to stations for charging devices (handy as my phone was almost dead).

The odd announcement for flight departures was made but it was better to keep an eye on the screens dotted around. Boarding started from Gate F19 at 2030 with Upper Class and premium economy class passengers called first, followed by economy with rows from the back called first.

As I was in row 45 towards the front, I was one of the last to be called at 2045, with access to the plane via an airbridge. I was in my seat by 2050. There were quite a few empty rows around the cabin so I was lucky enough to be able to move to the middle section of unoccupied D-E-F-G seats after take-off.

As I wrote in my review of the outbound flight (click here to read the review), this B747 has three cabin classes – Upper Class (business), premium economy and economy, with the upper deck configured with five rows of business class and six rows of economy seats.

On the main deck, economy seats are arranged 3-4-3 (A-B-C, D-E-F-G, H-J-K) across rows 39 to 66. Upper Class seats is from row 12 to 25, while premium economy is 38-37. There are four washrooms in the middle of the aircraft with two designated for premium economy and two for economy. There are more economy toilets in the tail.

(You can see a seat map here.)

I was disappointed with the IFE system – it had a great choice of movies including a number of new releases but the picture quality was blurry and pixelated, and the monitor could only be controlled by remote (no touchscreens). They were also awkward to turn off and sometimes came back on if you leaned against the remote on the side of the armrest.

This particular IFE system is in serious need of an upgrade – many of the planes in Virgin’s fleet have excellent entertainment systems. However, there is no point in the airline tearing it out as it’s entire fleet of B747s are being retired next year.

Tray tables are slender bi-fold units that slide forward to come closer to you. The seat is Virgin Atlantic’s older product but was reasonably comfy considering its age and had 31 inches of legroom as standard. There are seat-back mesh pockets for magazines and personal items although it was hard to insert a large bottle of water as the elastic at the top doesn’t really stretch.

Regular economy seats are upholstered in red or grey, while extra legroom seats (which cost £45 more on this flight) are purple. In the front cabin, these were A-B-C and H-J-K seats in rows 41-44. Over-wing seats were between rows 45 and 41.

If you aren’t paying for extra legroom seats, rows 45, 46 and 47 are good choices. Avoid sitting to near the galley or the toilets. If you sit towards the back of the plane, it will take much longer to disembark (something to bear in mind when queues at immigration in the US can be lengthy).

The plane didn’t push back until 2130, when the safety video was aired. The picture quality and sound were so bad it was impossible to tell what was being instructed. (Luckily I know it off by heart.)

After a protracted taxi, the B747 finally took off just before 2200. Once airborne, at 2215, a drinks service took place with a full bar of free beverages – I had a G&T (Bombay Sapphire gin and Britvic tonic served with ice and lemon). Mini bottles of Gardet champagne were available for £12. The cabin lights were kept low, though, as many people were settling down to sleep.

Hot towels were handed out at 2255. The menu listed a starter of garden salad (cucumber, olives, tomatoes and leaves with balsamic vinaigrette), followed by a choice of three mains.

There was cottage beef in a rich gravy with vegetables; Sriracha chicken with mushrooms, green beans and Japanese steamed rice; and a vegetarian dish of mushroom Provençal fusilli pasta in a marinara sauce of mushrooms and olives topped with Italian hard cheese. There was also a roll and cheese, and a chocolate cheesecake. I had the pasta, which was okay. I found the cheesecake too sweet though.

During the meal, another drinks service came around, followed by tea and coffee. I settled down to sleep on my row of four seats at 0015 and managed to get a bit of rest until the cabin crew turned on the lights for breakfast at 0430. Boxes came containing plain yoghurt, granola and an apple muffin, as well as a sickly, spongy, warm apple Danish. More coffee, tea and juice were served.

We landed a bit later than the scheduled time of 0545 (1045 local time), with disembarkation from the front of the plane via an airbridge. It was quite a long walk to immigration where I was met with very long queues at both the e-gates and staffed desks. I was collecting my suitcase from baggage reclaim downstairs by midday.

As I said in my outbound review, Virgin Atlantic’s older B747s out of London Heathrow are not representative of the quality seating and entertainment it offers on board its newer aircraft (the B787 in particular), so it’s a good thing they are being retired in April 2016. I was fortunate to have three free seats next to me to lie down on this night flight – a real bonus.