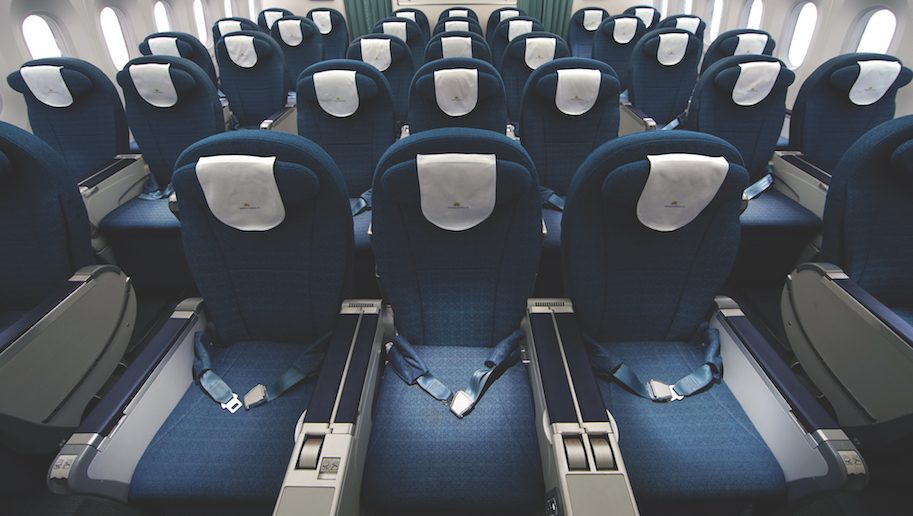 BACKGROUND Vietnam Airlines began operating the Dreamliner on daily flights from Heathrow to Hanoi and Ho Chi Minh City in September 2015, flying four-times weekly to Hanoi and three to Ho Chi Minh City. Flights to Hanoi operate on Sundays, Tuesdays, Thursdays and Fridays, departing from Heathrow at 1110 and arriving at 0430 the next day, while the Ho Chi Minh service flies on Mondays, Wednesdays and Saturdays, also departing at 1110 and arriving at 0520 the next day. These are the only direct services between London and Vietnam.

CHECK-IN I arrived for my flight to Ho Chi Minh City at Heathrow Terminal 4 at 0935, and went to Zone E, where premium economy passengers have their own check-in desk. I hadn’t checked in online, but the attendant assured me that there were only 80 passengers on the flight, so there were plenty of empty seats, and I could have a whole row to myself. Security was extremely quiet and I was airside by 0950.

BOARDING At 1040, I headed to Gate 11, a five-minute walk from the main concourse. There was no queue as everyone had already boarded. On the aircraft, I was quickly offered a hot towel and a choice of juice or water. I was also given an amenity kit containing socks, a dental kit and an eye mask, along with a pair of slippers. We pushed back at 1115, and weren’t airborne until 1140. 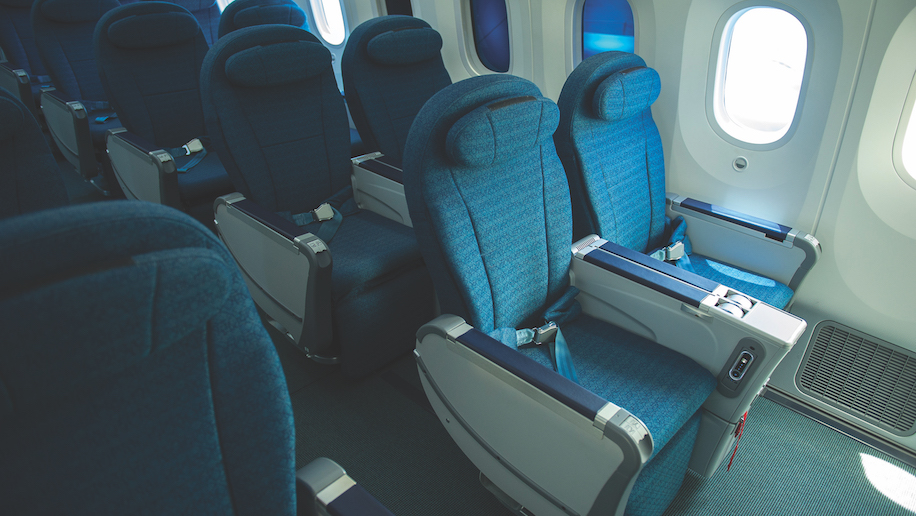 THE SEAT The B787-9 has five rows of premium economy configured 2-3-2 (A-C, D-E-F, G-K). There is a galley and washrooms at the front of the cabin, while the back row is separated from the economy cabin by a curtain. With the option of a row to myself, I chose 11K, a window seat near the front of the cabin. It was spacious and comfortable, upholstered in teal fabric with lotus flower-shaped stitching and a cushioned headrest that provided extra support. There was plenty of legroom (42 inches, compared with 32 inches in economy) and seven inches of recline (six in economy). A footrest unfolded from the seat in front and a legrest was released from a lever on the right armrest. The 10.6-inch touchscreen IFE monitor was stowed in the left armrest with a handset recessed underneath, while the tray table unfolded from the right armrest. It was a little rickety, and just about large enough to hold a slim laptop. There was a USB port beside the screen, plus two universal sockets under the middle armrest.

WHICH SEAT TO CHOOSE? Seats in the middle and back of the cabin avoid noise from the washrooms and galley, but besides that, there is no huge difference between any of the seats. The bulkhead offers slightly more legroom, although there are bassinets in place here, so seats are allocated on the day as appropriate. It is not possible to pre-book or pay extra for these.

THE FLIGHT
Fifteen minutes after take-off, cabin crew came around with menus and headphones, which were the same as those distributed in economy class and were a little uncomfortable to wear over long periods. The drinks trolley appeared shortly afterwards, offering a variety of wines, spirits and cocktails alongside juices, soft drinks, Vietnamese green tea and coffee. Lunch was served at 1225, with a choice of beefburger with mash or Szechuan-style chicken and steamed rice. I chose the burger, which was tender and flavoursome. 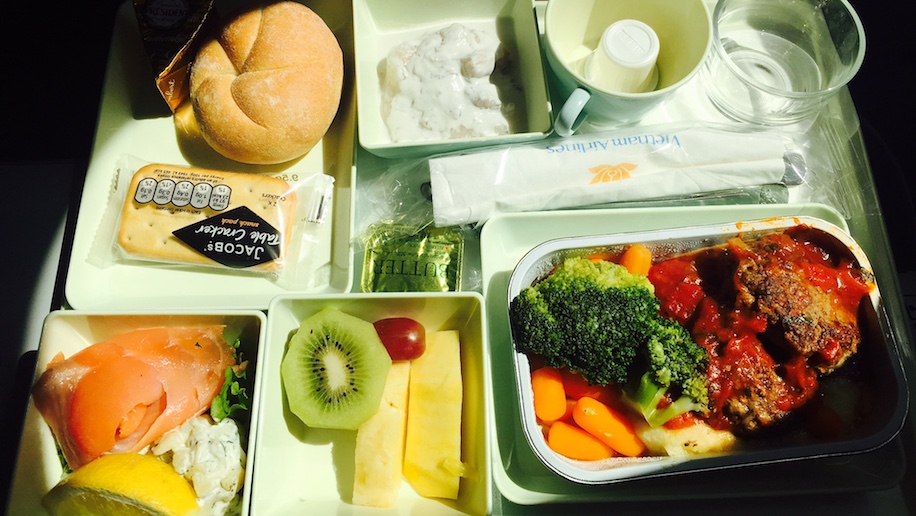 After dinner, I settled down to watch a film – there was a good selection of new releases, classics and TV shows along with a number of new albums. Vietnamese subtitles feature on all programmes, but I didn’t find this too distracting. There was no wifi on board.

At 1250, the windows turned to dark blue, plunging the cabin into darkness. This was off-putting, as I had hoped to do some work while there was still daylight and I was unable to adjust the tint of the window either. Instead, I worked with my individual light on. Later on in the flight, sandwiches and juices were brought around, and pot noodles were available from the galley.

At 0315 local time, the lights came on and breakfast was served 15 minutes after. I was offered a choice of poached egg with hollandaise sauce, grilled bacon and hash browns, or chicken with stir-fried vermicelli. The Asian option was tasty and featured fresh, succulent mushrooms and bok choy, served alongside strawberry yoghurt and fresh fruit. The crew were friendly and responsive. 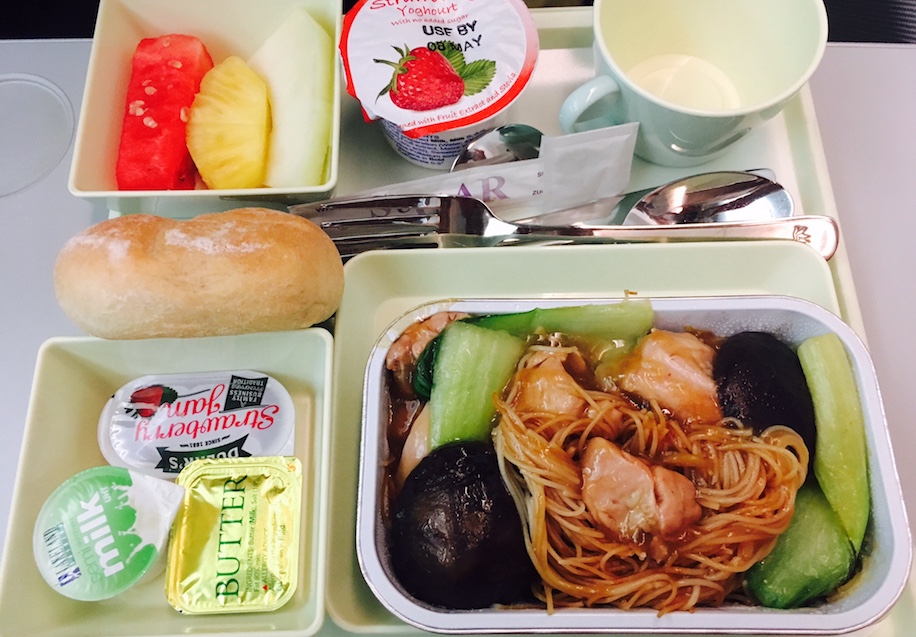 ARRIVAL The lights went out for another 40 minutes before the captain announced at 0440 that we would be starting our descent. Headphones were collected, so I read until we landed at 0512. After taxiing for ten minutes, we disembarked at a remote stand at 0525 and boarded an air-conditioned bus. Fifteen minutes later, I had cleared passport control and passed my bag on to Vietnam Airlines staff, who loaded it on to the domestic flight I was about to take to Da Nang.

An excellent product with a number of features that made long stints seated quite comfortable. Most notable, however, was the service, which was exceptional thanks to a number of minor yet thoughtful touches such as slippers, hot towels and regular offers of food and drink.

PRICE
Internet rates for a return premium economy flight from London to Ho Chi Minh City in July ranged between £1,013 and £1,579 depending on flexibility.