Jason Atherton’s the Social Company opened Temple and Sons, a grill restaurant and bar in the City, in November. It’s part of a considerable expansion for the Michelin-starred chef’s empire in the capital – next month he also opens New York-Italian restaurant Hai Cenato in Victoria.

In the City of London, on Old Broad Street, or rather just off it in a small square. It is also quite literally a stone’s throw from chef Jason Atherton’s nearby City Social restaurant, which is over 20 floors above in the neighbouring Tower 42 building (the old NatWest building for people of my age).

It’s housed in a former Wagamama branch, an odd-shaped slice of a building that, following the redesign, now has a bar and deli on the ground floor and a restaurant upstairs.

In the evening, the bar is a buzzing place (it’s the City, after all, where all bars are busy). At lunchtime in January it was quiet, even on a Friday, although the restaurant was fully booked, a good sign, and lots of diners were having drinks with their meals, so perhaps it was a dry January only in the sense that people didn’t want to be seen getting wet too openly.

The upstairs restaurant is fairly small (66 covers), long and thin, with one half getting a view of the open kitchen, and the other half (where we sat) being slightly less distracting, and all the better for it if you’re having a business lunch.

Both upstairs and down, the design is by Russell Sage Studio, and uses “a palette of rich, caramel tones with flashes of orange and teal [to] create a warm and inviting space, with timber panelling embellished with antique brogue detailing and brass ironmongery. Feature lighting includes Victorian angle-poise lamps and a custom-made feature light suspended over the staircase between the two floors.”

As you might expect, provenance of the food and the history of the City is part of the positioning of the restaurant, the name of which comes from British statesmen Henry John Temple, Third Viscount Palmerston, who was twice prime minister in the mid-19th century and whose Palmerston House was previously on the site of the neighbouring Tower 42.

On the ground floor, the menu and interiors are “inspired by a traditional British grocery store, complete with artisan snacks and sandwiches including game sausage roll, creamy mash and HP gravy and Old Spot spiced pork belly sandwich on brioche, spicy slaw and butter lettuce, alongside a range of British cured meats from Cannon and Cannon”.

Available for the first time at Temple and Sons is the Social Company’s own signature bottled English lager, the Subtle Fox, while Dizzy Goose Pale Ale is offered on draught.

We didn’t see any of that, since we were having lunch, and so it was the food that was centre stage. This is a grill venue, but with so many excellent steak/grill restaurants around, it doesn’t try to compete with dozens of different cuts of meat. Still, I was impressed that both the meat options and fish of the day were brought to the table and described (and priced). Our waiter emphasised the grill itself, which uses different types of wood, charcoal and even hay.

Some of the dishes are designed for family-style dining, with grilled fish and meat served whole or in large cuts, with a selection of sides to share – an example of this was the slow-grilled leg of Herdwick lamb, garlic, tomato, mint and beer vinaigrette for two or three people (£60).

We went for the Pork Haslet “mining food” and pickled beetroot salad (£8) and cured English meat from Cannon and Cannon (£9). Both were filling and excellent – the pork dish had a sweet and cleansing effect on the taste buds courtesy of the beetroot and was a good precursor to the main course of braised Irish short rib, spring onion and coriander (£25).

I also tried some fish from the grill (it was a Friday after all), choosing the sea bream, which was large and absolutely delicious.

We were well advised to take individual glasses of wine – there’s a short choice of five whites and five reds by the glass, and a longer list for bottles.

For dessert, we had the sticky toffee pudding with Cornish sea salted caramel and clotted cream ice cream (£8.50), which was lovely and rich and sent me out into the cold and wet winter afternoon feeling very comforted, and a Valrhona chocolate mousse, bergamot parfait (£7.50), which was subtle in flavour but also so filling that it finished off my dining companion, who thought it might be called Valhalla chocolate mousse for the effect it had on his productivity that afternoon.

As you’d expect from a good London restaurant – attentive with some banter, as well as a sommelier who knew his grapes.

The cooking was excellent and the service good. The restaurant is in a slightly odd location and works better at night, when it feels less exposed by the windows and not so incongruous in design. Well worth trying for an evening meal. 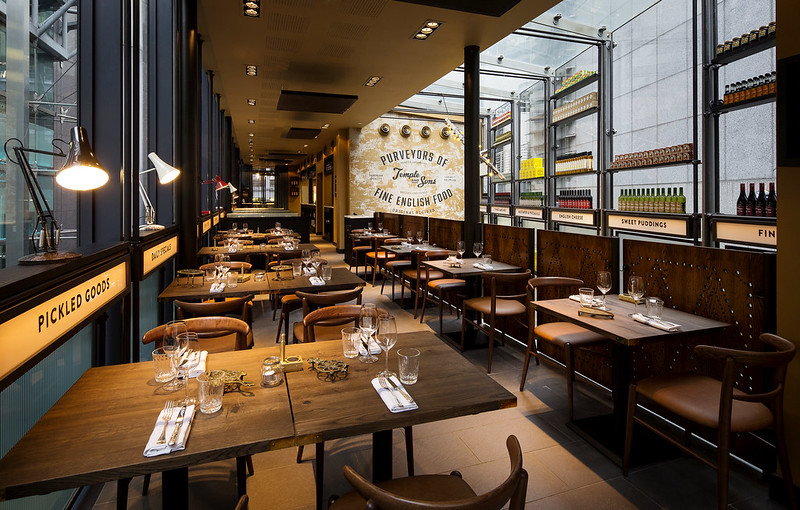