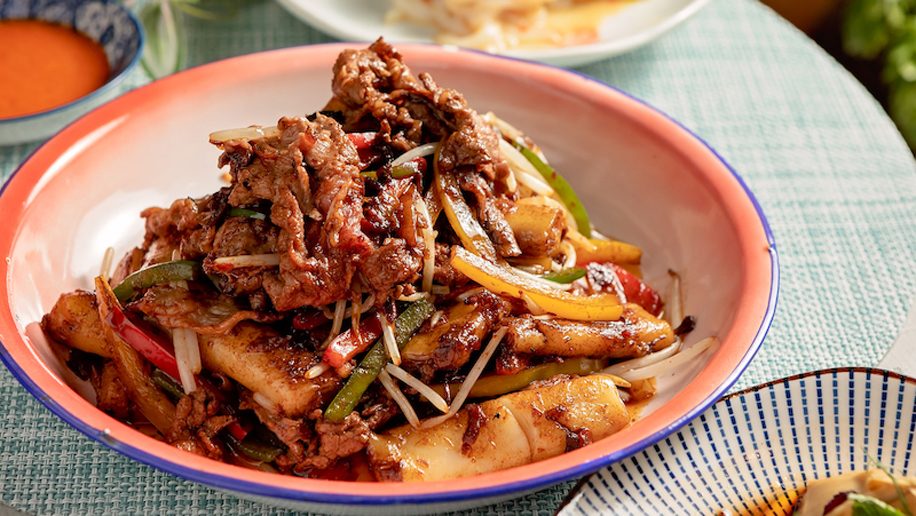 Mrs Pound is a speakeasy-style restaurant and bar that hides behind a fake stamp shop façade. It seems to have established itself as an indispensable watering hole for the hipster set of Sheung Wan, a district near Central that was once famous for its dried seafood but whose gentrification has seen the opening of upscale coffeeshops, brunch spots and bars catering to an increasingly young and affluent population, including a good dose of expats.

The eponymous (and fictitious) character of Mrs Pound is described in the restaurant’s marketing literature as “a famous burlesque dancer with a lustrous career” who is “better known now as a glamorous world traveller” who is “often seen jet setting around the globe with her new beau Lee Sai Wah”.

“The restaurant’s padlock shop façade is inspired by their romantic night together on the bridge of love, where Mr Lee gave Mrs Pound a lock with their initials entwined, before throwing away the key to symbolise their unbreakable bond.”

For those less interested in the restaurant’s myth-making and more in its cooking, I had dinner and cocktails there on Wednesday night to see if the spot is a good one for the business traveller.

About a 10-15 minute walk (uphill!) from Sheung Wan MTR station. This was fine in late February, when the weather was still cool, but even the PR executive with whom I dined admitted it’s an uncomfortable walk to the restaurant in summer. So I recommend you MTR it and walk it in winter, and cab it in summer. 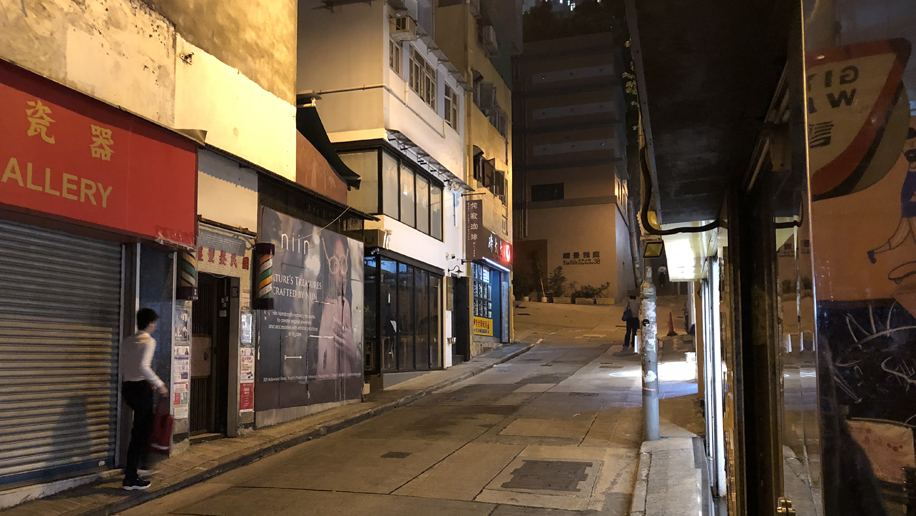 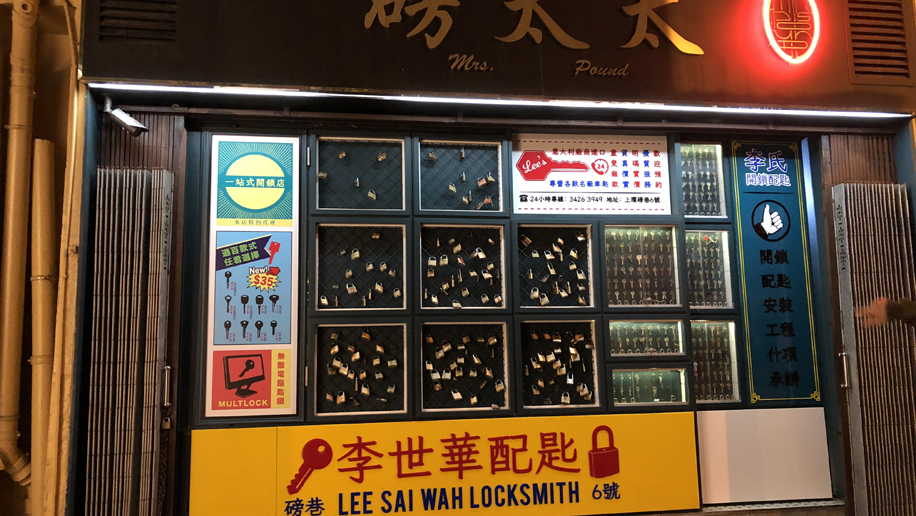 Hipster, but lovably so. Mrs Pound manages to make its relatively small space feel cosy rather than constrained. The place was busy on the Wednesday night that I dined, but in an atmospheric rather than a claustrophobic way. Although I didn’t sit at the bar, it looks like a good place to knock back a few cocktails in the middle of the evening. 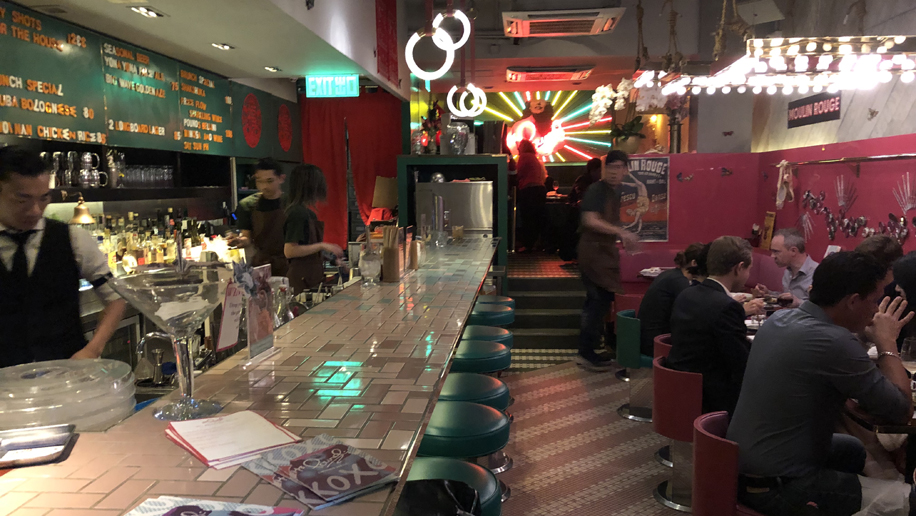 I was there to try Mrs Pound’s new “street food-inspired” menu.

“Mrs Pound has taken the concept of street food and put her spices and herb ingredient war chest to the test with brand new dishes on the newly launched menu,” the restaurant says in a press release.

We started off the meal with some skewers – the sticky coffee pork belly skewers marinated in coffee, soy sauce, palm sugar and puffed rice for extra crunch… 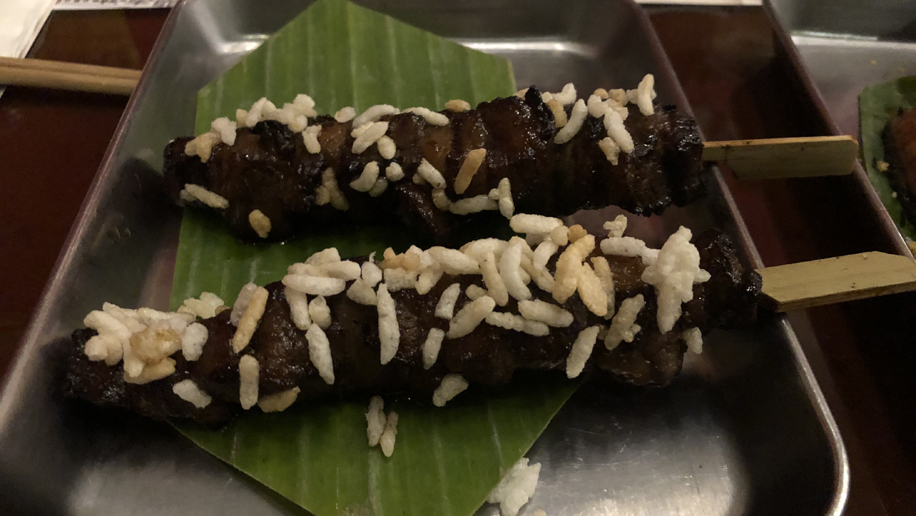 …and the crispy unagi (eel) and fish skin chip skewered on bamboo sticks, though it was impossible to eat from the stick, the eel being too soft. I resorted to attacking it with my chopsticks instead… 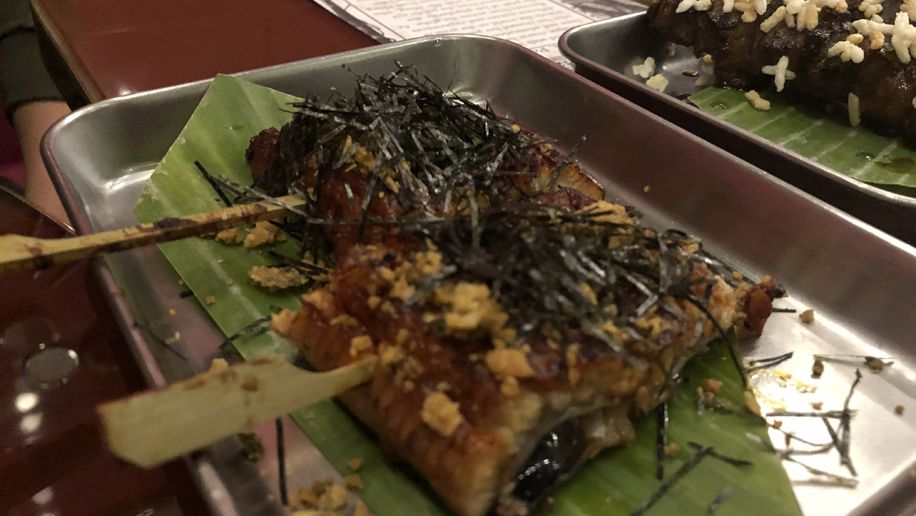 Then we moved on to the wok-fried frog legs with black bean butter sauce, pepper and Cantonese XO sauce. As has been said before, the frogs legs tasted much like chicken. They went well with the black bean sauce. 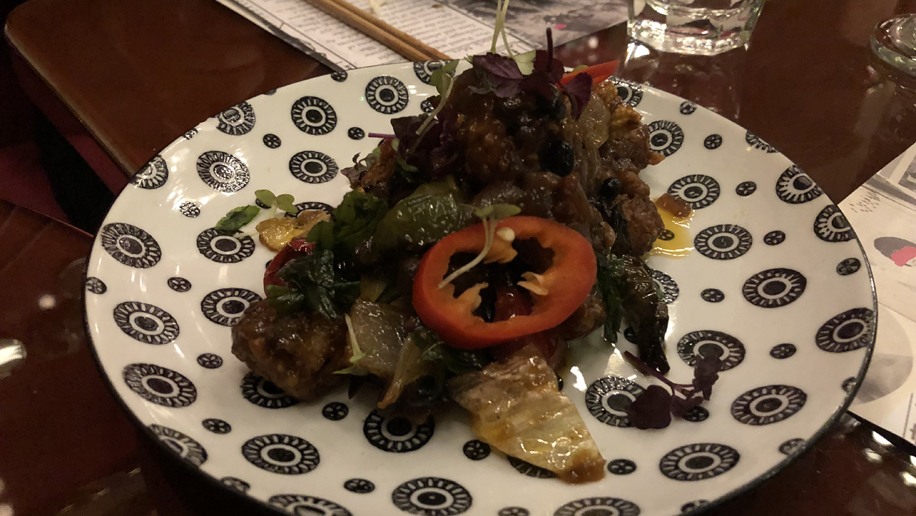 Next was the ma la beef tongue, which was fine if you’re into tongue, but not particularly memorable… 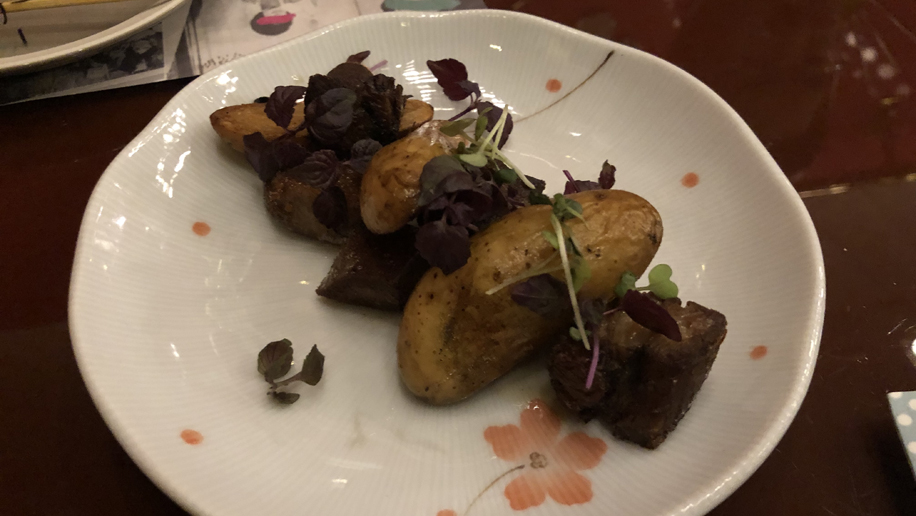 Then we had the Japanese-Italian inspired yuba bolognese, made with vegetarian Impossible meat (actually made from plants), tomato, and basil layered with Japanese-style bean curd sheets. I really enjoyed this, being a fan of tofu. If you hate carbs, you will enjoy this too… 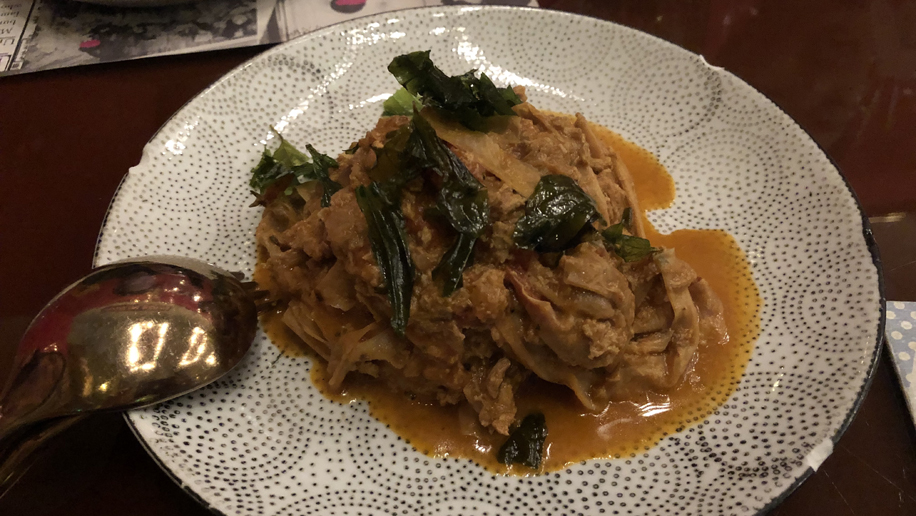 Then the bone marrow and steak cheung fun, made with US rib eye, marrow, seasonal shellfish, Chinese sausage and XO Sauce. This was tasty and the bone marrow really added flavour, but bear in mind at HK$288 (US$36.70) this is the most expensive item on the menu… 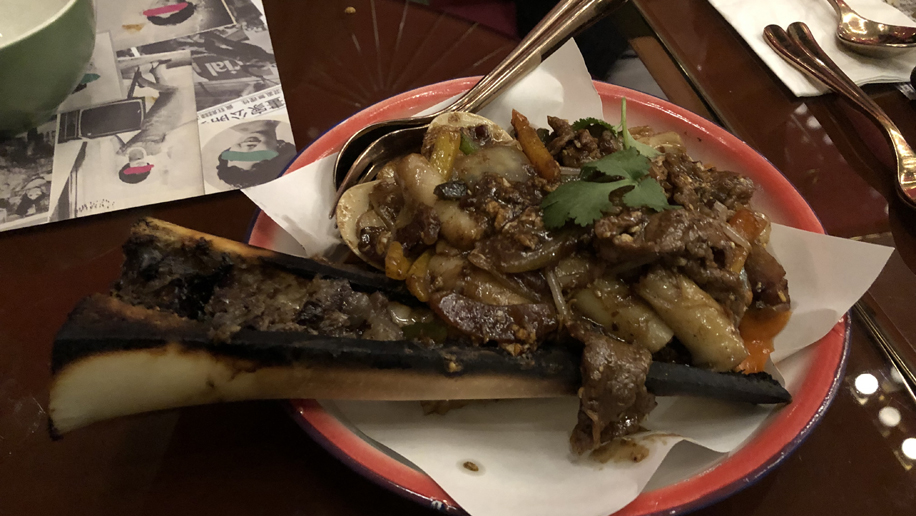 About half way through the meal I was offered a choice of cocktails, the waiter having apparently forgotten to offer me one at the start of the meal. I went for “The Girl with the Sailor Tattoo”, made of Sailor Jerry Spiced Rum infused with orange peel, chocolate bitters, lime wedges, simple syrup, vanilla syrup, Cointreau, cocktail cherrie and mint springs. It was refreshing and delicious… 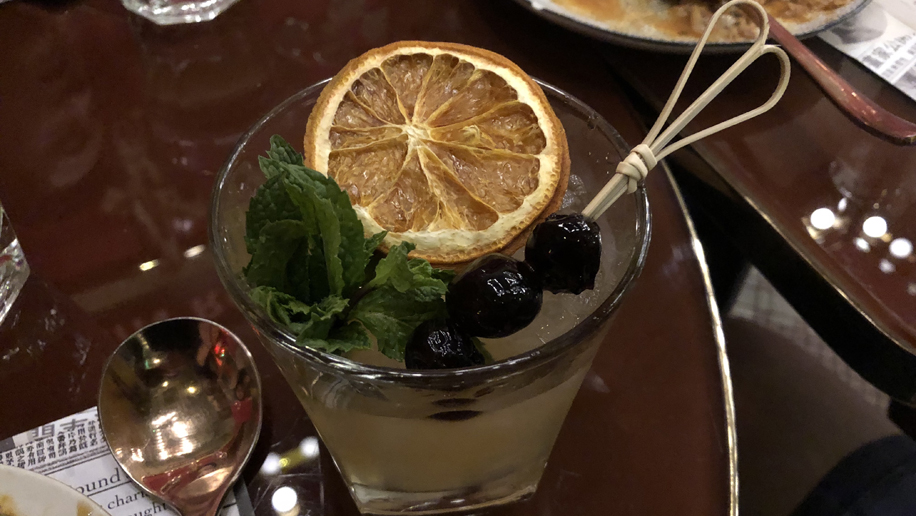 Then came the king prawn hoi mei sticky rice, which – as sticky rice usually is – was very heavy and filling… 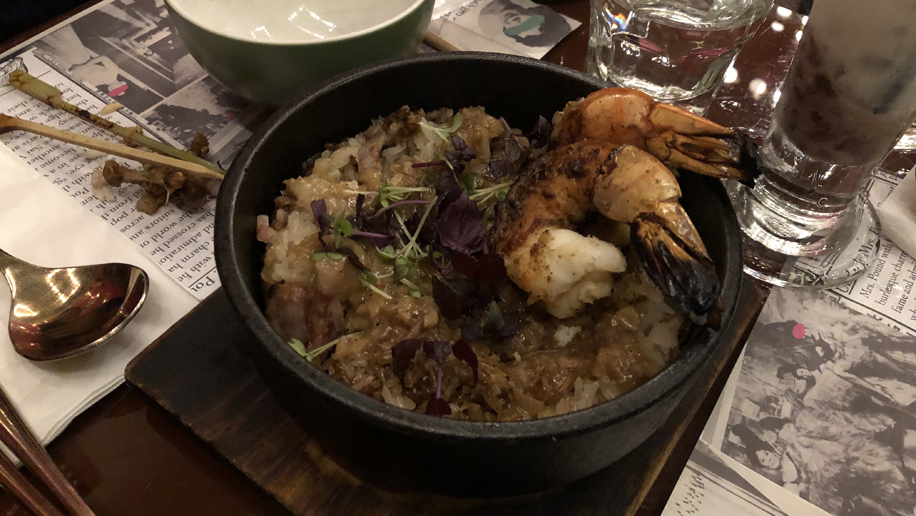 We also had the the Malaysian Laksa Prawn Dumplings (HK$128/US$16.31), a combination of Southeast Asian spiced laksa broth with angel prawn and tofu dumpling served with homemade garlic toast for an extra crunch. I’d actually had a similar dish the previous day at The Chinese Library in Tai Kwun, though Mrs Pound’s take on the dish was more wonton style than xiaolongbao style as at The Chinese Library. 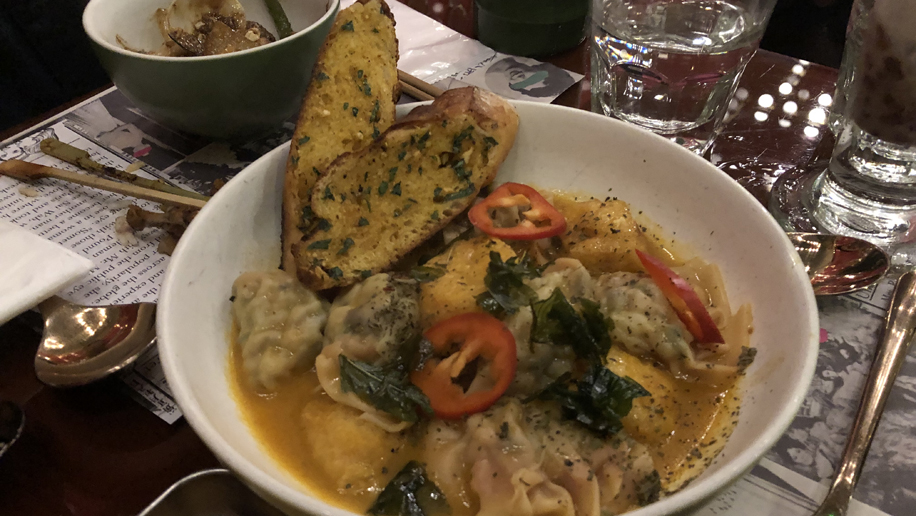 For dessert I tried the kumquat halo halo made with sago, kumquat compote, cendol and Sorbet, which is good for sharing… 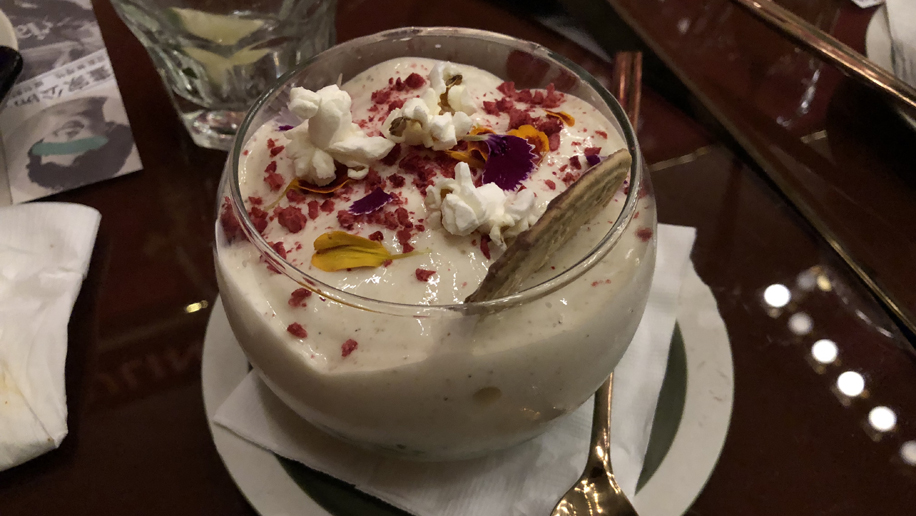 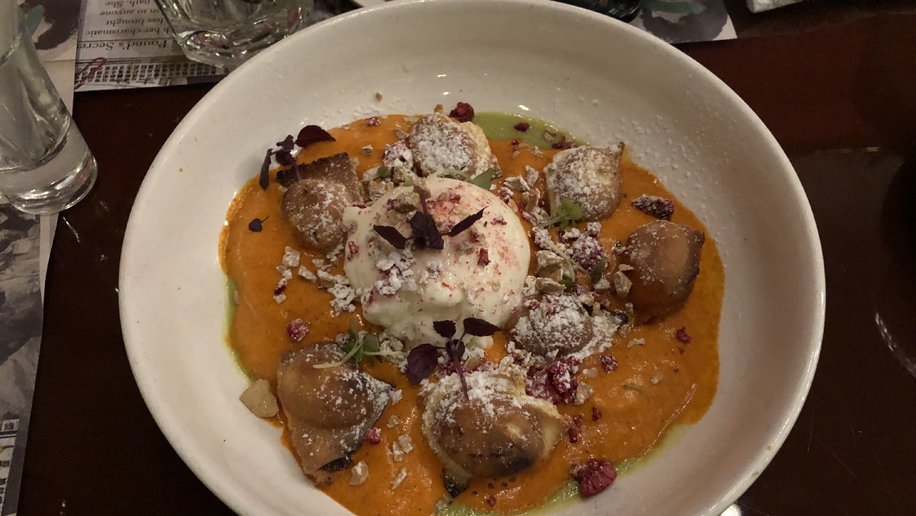 A cosy, trendy and inexpensive spot to unwind in the evening. The atmosphere is probably too informal for a serious client meeting, but it’s a nice spot to relax with a cocktail and some innovative dishes after hours. 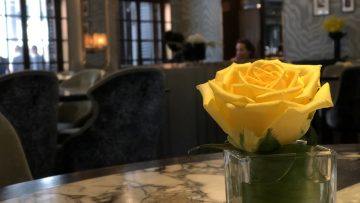 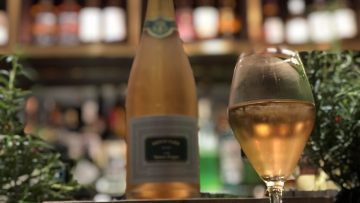 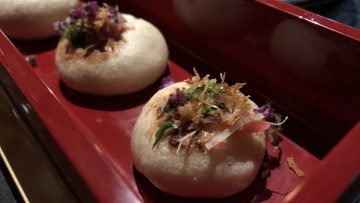 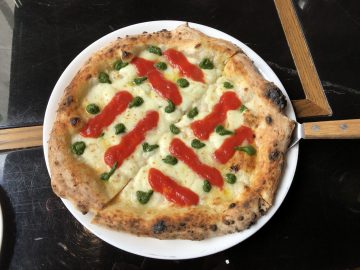