Chef Ollie Dabbous made a big splash when he opened his first restaurant, Dabbous, in London in 2012. I reviewed it the week after it opened and gave it a rave review; later, the Michelin Guide and many others showered it with plaudits and awards. Dabbous then opened a low-priced spinoff called Barnyard – but  closed them both to do a consultancy for the hotel restaurant Henrietta. While doing this, he was also working towards his biggest project yet: Hide, a capacious Mayfair restaurant backed by Yevgeny Chichvarkin and Tatiana Fokina of London’s best wine shop, Hedonism Wines.

Hide is as ambitious as restaurants get: one of London’s most cutting-edge chefs, a wine list that stretches to 6,500 choices (!), and Russian backers for whom spending a few million creating an new restaurant is as much a hobby as a business.

A fairly nondescript, glass-walled corner site on Piccadilly, where the Lebanese restaurant Fakhreldine used to be, has been transformed inside into three floors: “Above”, where the tasting menus (£95 excluding wines) are served; ‘Below”, the basement bar; and “Ground”, on the ground floor, which is an all-day restaurant serving breakfast from 7.30am, then meals until 11.30pm. There are also five private dining rooms. Ground is therefore the floor/brasserie that will concern most diners.

A lot of thought has gone into an expensive refit. Those who know the Hedonism wine shop will recognise some signature Hedonism quirkiness; the devil is in the details. I discovered a discreet drawer below my table; on opening it, I found a phone charger inside, deliberately provided. There is lots of wood, lots of custom-made everything; Hide embodies steath wealth.

The kohlrabi had been shaved mandolin-thin and used to wrap the pear; the vinegar is used the dressing. Perilla had been substituted by (seasonal, foraged) chickweed on our visit. Roganic does something similar with kohlrabi; this style of wafer-thin vegetable wrap presentation has become popular during the “clean eating” era. 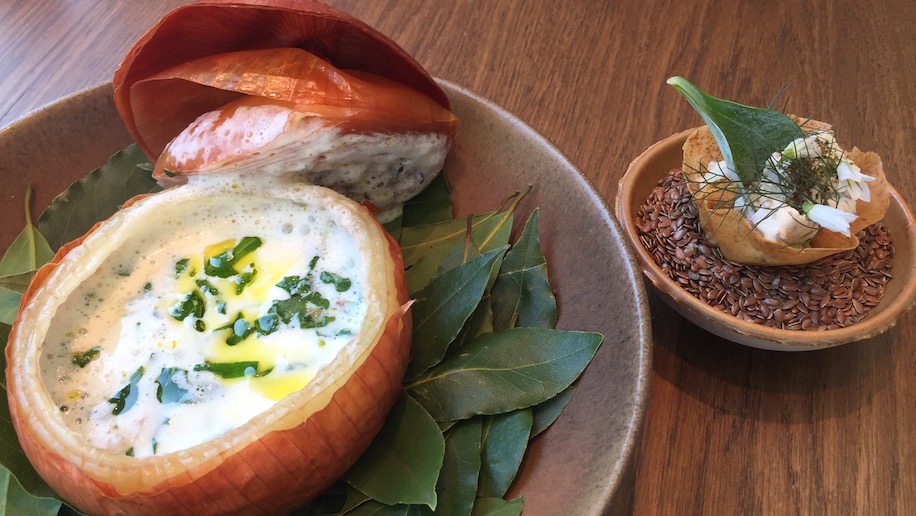 A roasted onion hollowed out, 1970s dinner party style. The white onion soup inside was ambrosial, and little cubes of smoked eel gave the soup some texture; the extra little serving of the moreish eel, served in a little edible basket perched on toasted linseeds and garnished with Allium triquetrum flowers. 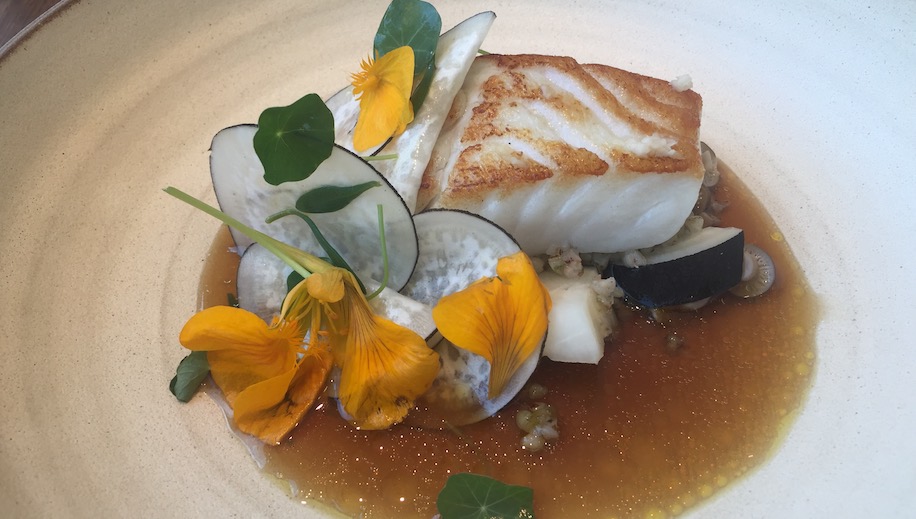 Norwegian Skrei is in season during March-April. There’s a Japanese influence on this dish, from the umami-rich consommé to those black-skinned daikon and the slithery shimeji mushrooms. Adding tasted buckwheat to give earthy tones, and the tang of pretty nasturtium, is genius. 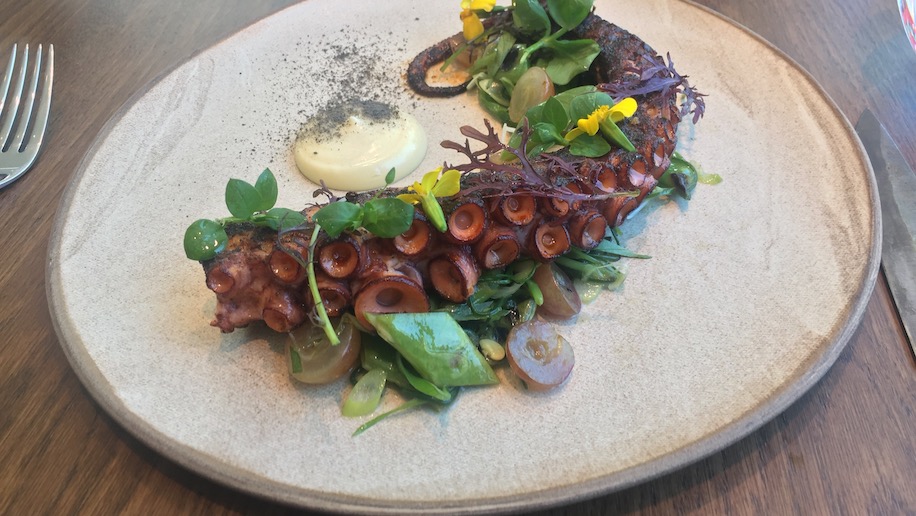 The tentacle was pleasingly charred and well-cooked without being rubbery; the muscat grapes (muscatel is the Iberian name) added sweetness, and the celery-flavoured lovage added a pleasing herby edge. Another successful dish. 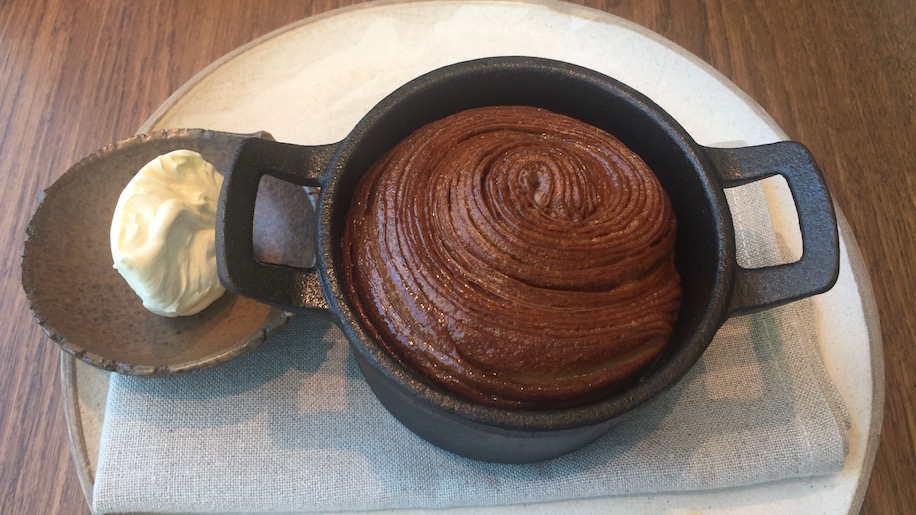 A bit like a rum baba in concept, as rum is poured over the hot pastry. The acorns give a slight chestnut-like aspect to the tightly furled pastry. Hot smoked caramel is poured over this; it’s served in an iron dish that retains its heat. This dessert is incredibly moreish without being too sweet or heavy.

Soft-serve ice cream with a malty taste, and some chocolate, nuts and Japanese dessert beans beneath.

Hide has a discreet and lovely bar in the basement; the licence requires you to order some food with your drinks, so of course there’s a great snacks list. The back bar is well-stocked with a bartender’s dream selection, but with the owners of Hedonism behind it, it’s the wines that make it stand out. The standard wine list is 450 bins, stored in a state-of-the-art cellar which the staff will show you around if you ask them nicely. If you want something a bit more unusual, they produce an IPad with the Hedonism’s inventory; bottles from the show will arrive in 15 minutes. Best of all, there is a flat mark-up of £30 per bottle added to the Hedonism wines; so if you fancy a Supertuscan with a retail price of £300, say, the Hide price will only be £330 (most restaurants work on a percentage basis). Therefore more you pay the better the deal, perversely. More ordinary mortals will be pleased to hear the selection of wines available by the glass is also exemplary. 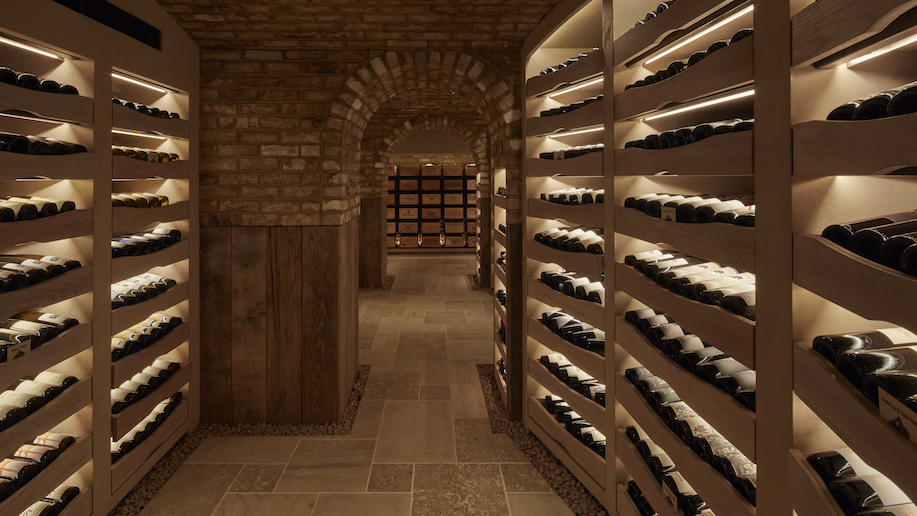 The rule-of-thumb in the catering business is that no-one wants to pay more than £15 for breakfast, not even in the fanciest restaurants. This is why breakfast is often a great value way to experience places such as The Wolseley – ten minutes’ walk away on Piccadilly, and one of London’s most popular breakfast venues (smoked haddock kedgeree: £15 at The Wolseley). But Hide is upping the game, with orange juice priced at £7, pain au chocolat at £4, porridge at £9, and what is effectively a Full English costing £18. This isn’t the most expensive place in London to have breakfast – as Dante observed, there are always deeper hells – but it’s certainly one that you don’t visit if you’re on a tight budget. 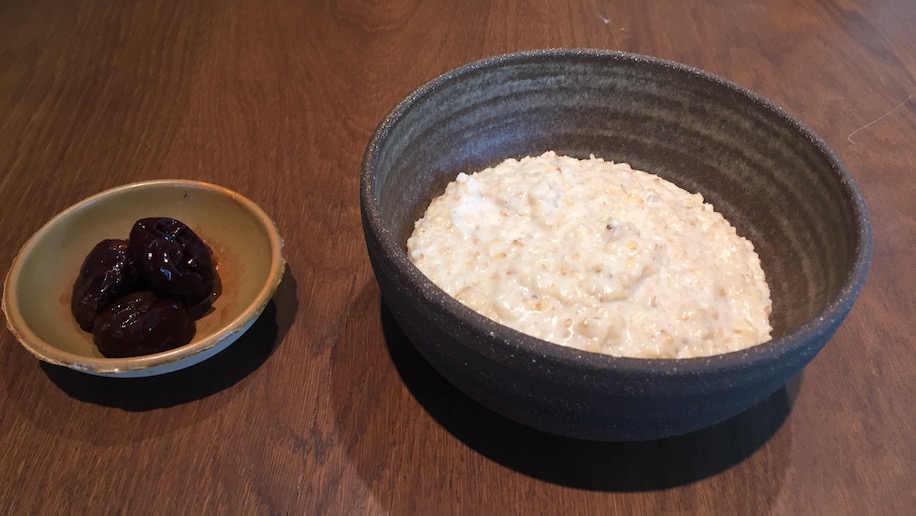 Or as the menu puts it, “organic porridge oats cooked with unrefined sugar & Jersey milk served with a choice of fresh honeycomb /maple syrup / prunes soaked in cherry blossom tea.”

This was excellent porridge: slightly firm to the bite, creamy and bit sweet. Purists might observe that in texture and taste it was more like a good rice pudding than a porridge, but I’d happily eat this for breakfast every day. The prunes did indeed have a slight floral note to them; excellent. 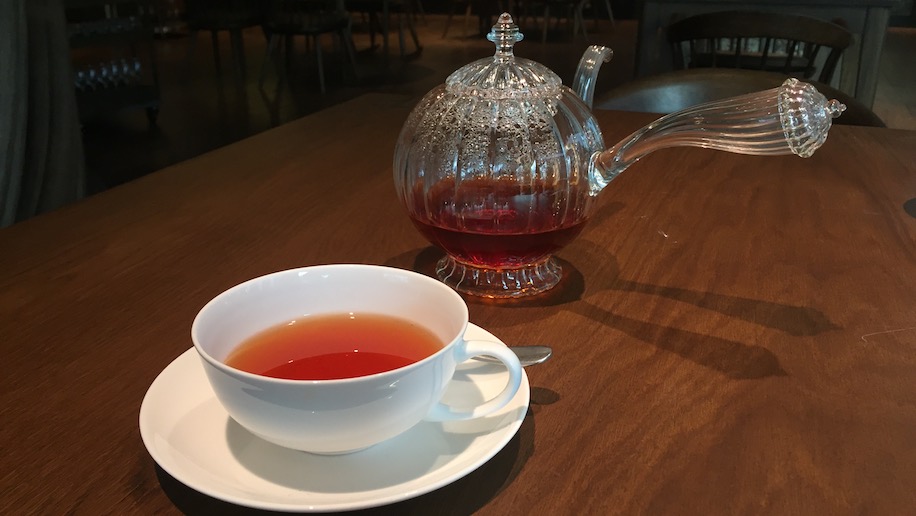 Not any old tea, but “Chandernagar chai” (a name unique to Hide, it seems).  I asked if this was Indian-style chai, my waitress said yes. It’s a black tea flavoured with Indian spices such as cloves and cinnamon, resembling the spiced chai teabags you can buy in Indian shops. You drink it without milk. The colour of the tea and the elegant glass teapot were both beautiful. 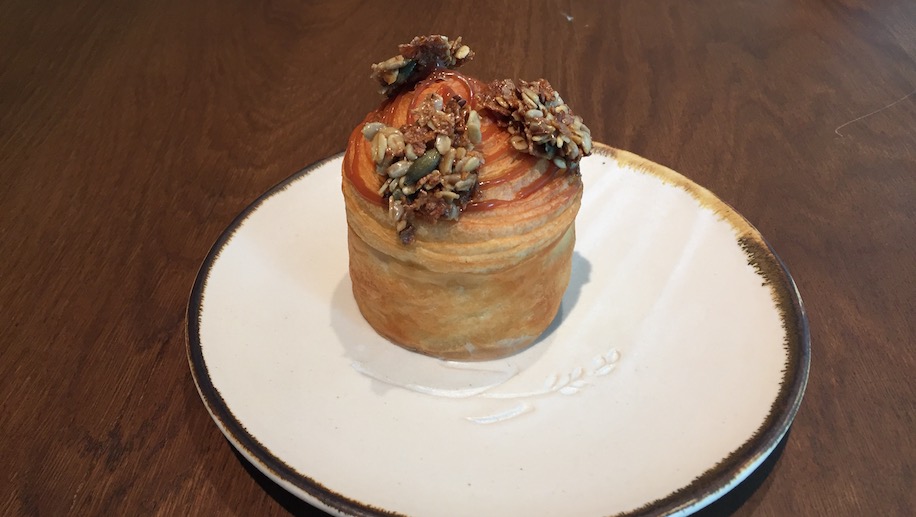 Eager to please. Even on my two visits the service was noticeably slicker the second time around; good to excellent, with particularly impressive wine service (as you might expect).

This is a rare example of a chef at the height of his powers teaming up with wine connoisseur backers who have very deep pockets. In this case, it’s a marriage made in heaven: brilliant food, fantastic wine list curated by expert staff, and a location in Mayfair that will ensure regular patronage by those who can afford it. Hide’s not cheap, but it’s excellent, and that rare thing: a destination restaurant for breakfast, lunch or dinner. Go just as soon as you’re able.

Meal for two with wine and service (Ground): around £160.

Breakfast: around £20 per head. 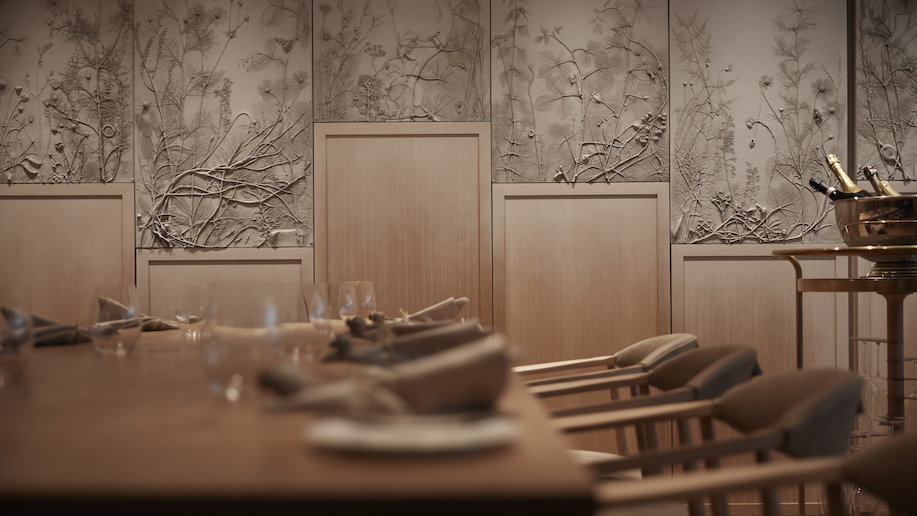 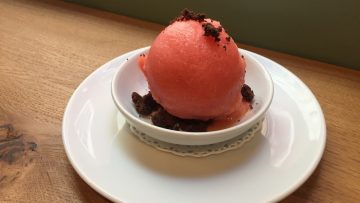 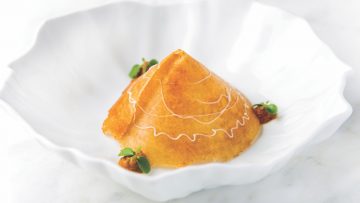 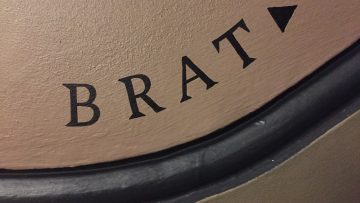 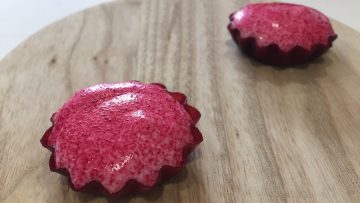