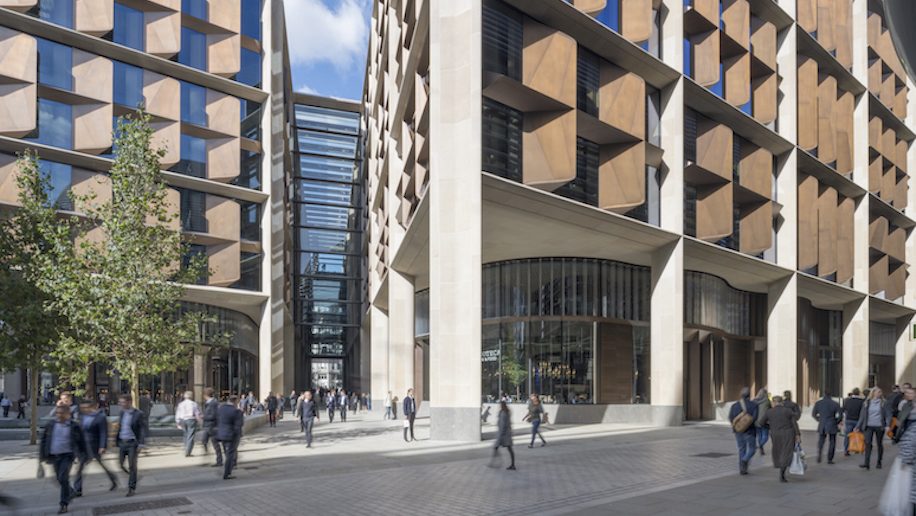 The former mayor of New York City, Michael Bloomberg, is a wealthy man. So incredibly rich that his company can afford to buy a whole block in the City of London next to Cannon Street station, raze it, and hire one of the world’s top architects (Norman Foster) to build a new London HQ for his financial news company. As statements go this one’s bolder than a Trump tweet, but it’s infinitely more considered. Bloomberg’s 4,000 London employees now swarm around inside Foster’s hive, which has been built with no expenses spared; it also happens to be one of the greenest large office spaces in the world (rainwater is collected, air circulation uses the building’s structure, low-energy systems are used), and it’s a beauty to behold.

Despite this, the glazed exterior looks remarkably restrained, and barely merits a second glance; like Michael Bloomberg himself, the brilliance is on the inside. Visitors only get the chance to stroll through a mall-like passageway through the middle that follows the course of the Roman Watling Street. This alleyway is called Bloomberg Arcade, and has a small number of eateries that were invited in by the Bloomberg team. These include Vinoteca, an excellent wine bar; Homeslice, a pizzeria; Bleecker, a burger joint; and Caravan City. 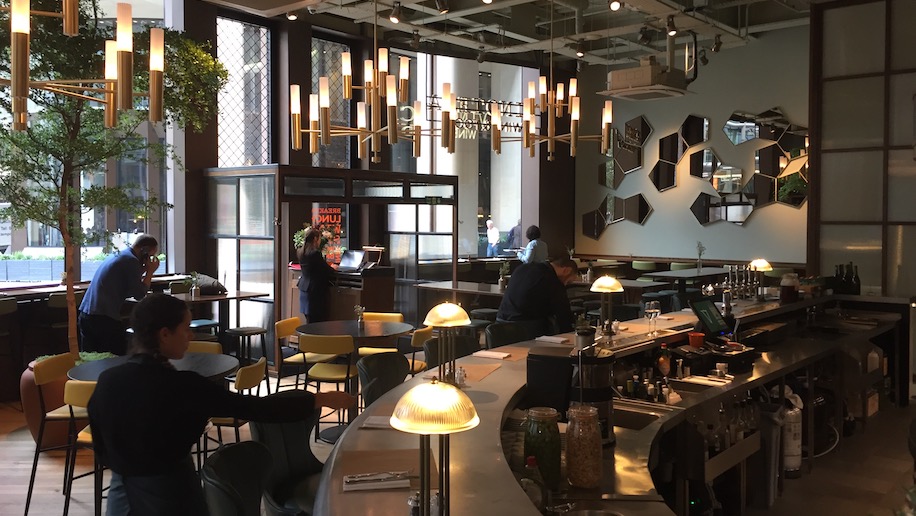 Caravan has branches at Exmouth Market, King’s Cross and Bankside. I’ve been reviewing them since the first one opened in 2010, and have seen an evolution from a Kiwi-style brunch and casual dining venue into the slick operation we see at Bloomberg Arcade today. It’s a cavernous space with a ground floor bar, dining tables everywhere, and a mezzanine level where deals can discreetly be struck or affairs conducted.

On our Friday evening visit the Spotify-random playlist was loud: 85-90dB, according to my phone app. The lights were low, and the menu one of those barely legible hipster menus of brown ink on brown paper. However, it had a great vibe, and the service was unfailingly cheerful and attentive. 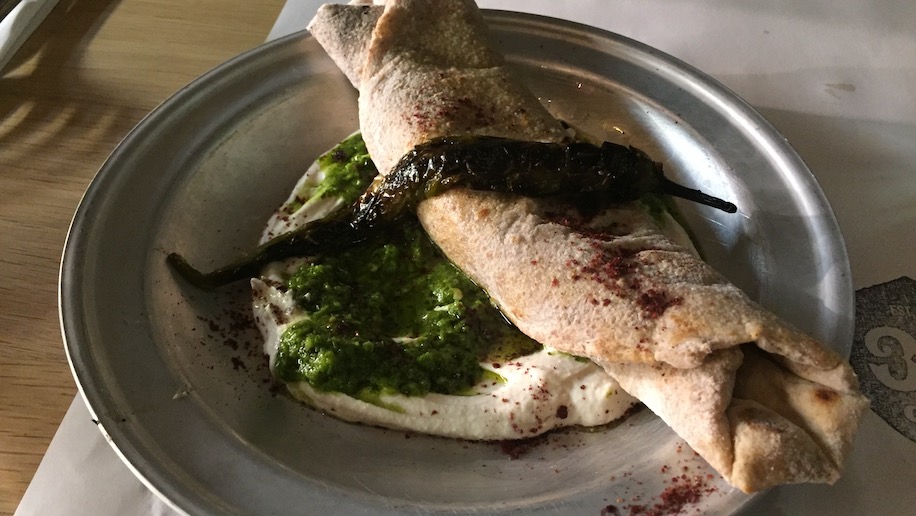 Caravan has moved on a lot from the early days of veal schnitzel or smashed avocado on toast. The King’s Cross branch was right next door to the recently-departed Grain Store, which championed veg-centric menus; this seems to have rubbed off onto Caravan which now serves charred hispi cabbage with sugary den miso, and chunks of Stilton scattered with Thai basil leaves. This was good, but even better were the chunks of baked kohlrabi on a black vinegar mayonnaise, garnished with herb sprouts and tiny shard of raw green chilli. The breads are exemplary, such as the rye sourdough flatbread served with a creamy labneh and the coriander punch of that Yemeni pesto, zhoug; or the Indian-style roti served as a mop for a plate of richly moist morcilla with a tidy pile of spelt. 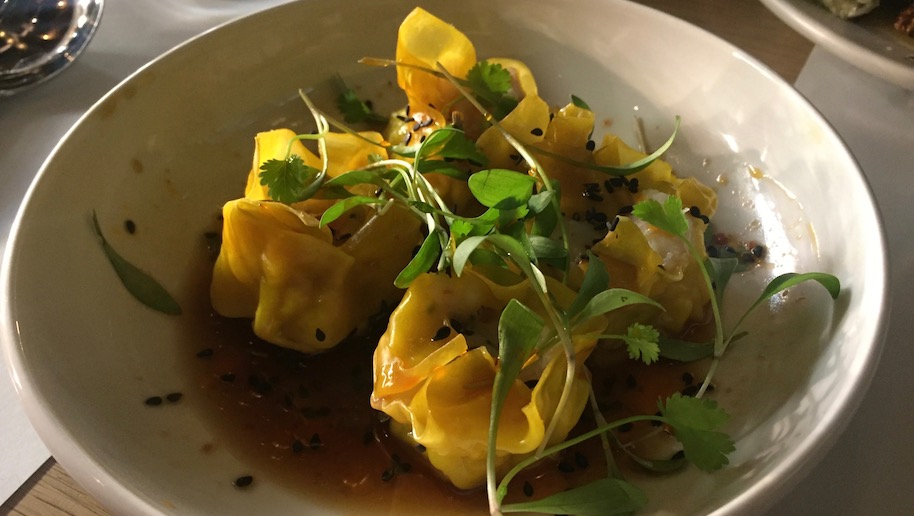 Perhaps the least successful dish was the “soup dumplings”, guilty of false advertising; real xiao long bao are pliable and liquid-filled, not the shumai-style, filo-wrapped dim sum that appeared. Despite this, most savoury dishes were good to excellent, and also very affordably priced; the pizzas in particular were flying out of the oven, but to come here and order pizza is to miss the point. The desserts seemed tame by comparison: walnut and quince tart with soured cream and manuka honey, or the rum baba-like ginger cake with hibiscus-poached pear and clotted cream. 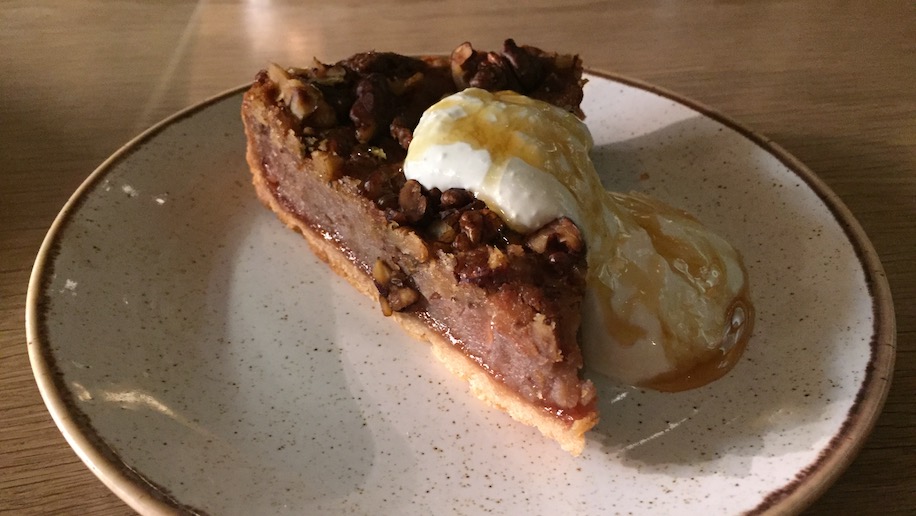 The bar does a busy trade in off-kilter Manhattans, Mules, Margaritas and Martinis, but it’s really the coffee that stands out. Caravan has its own roastery in King’s Cross, and daily-changing espresso blends. The tap wines – four styles – are good value, and there are four craft brews also on tap. There’s even a pomegranate kombucha if you’re taking care of your commensal flora. 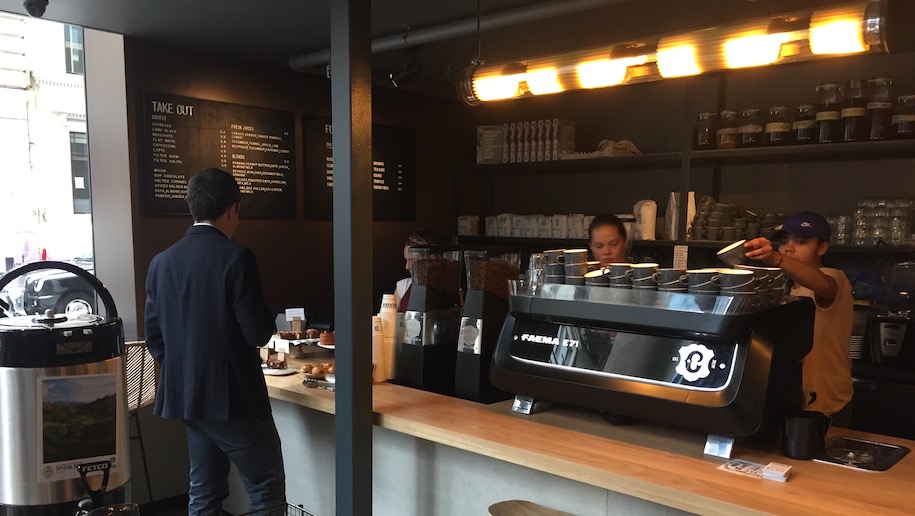 Perky, speedy, smiling. They also know the menu, which helps.

For veg-centric dishes that move things along a lot from falafels and pasta dishes, Caravan City is a hit. Our modest dinner for three came to £85; you wouldn’t get dinner for one at many of the other restaurants in this part of the City.

Words and pictures by Guy Dimond 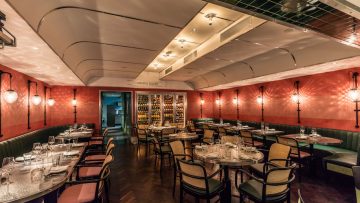 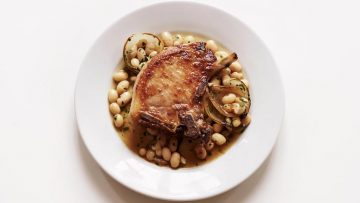 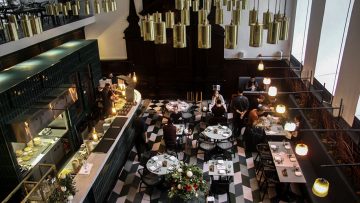 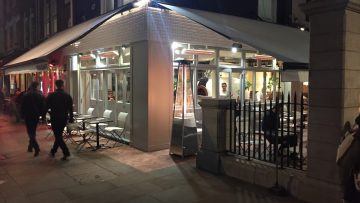