The long-awaited revamp of Lan Kwai Fong’s California Tower has had restaurateurs clamouring for a stake in the tower’s 27 floors of prime retail property. One of the few to secure a spot is acclaimed Australian chef David Laris, who led the culinary direction of Swire’s East Hotel in Taikoo and recently launched high-end steakhouse, Porterhouse by Laris, in June.

With elegant Scandinavian interiors, the restaurant’s décor is stylish, touting powder blue textiles on salt and pepper marble tabletops. Though the restaurant itself is dimly lit, each table is placed under its own spotlight so diners can appreciate the presentation and quality of their meal. Triangular mirrors arranged in a geometric pattern decorate the ceiling above – a futuristic addition to the restaurant’s largely minimalist design. At the back of the restaurant, it’s hard to miss the spectacular ‘Meat Locker’, which draws the eye to eight huge prime cuts of dry-aged meat. These range from the 20oz Kansas City Striploin to the almighty Porterhouse, which weighs in at a whopping 34 oz. Pescatarians will be appeased with an impressive seafood counter, while wine lovers will appreciate an illuminated wine cabinet that fills an entire wall.

The menu has several tasting menus, some prix fixe, others themed, such as the “Taste of a California summer”, which offers grilled Santa Barbara spot prawns alongside grilled rib eye pavé, and “Seafood Feast for Two or Four” featuring Canadian lobster, king prawns, oysters and signature house condiments.

Meat is obviously the main attraction here, and 90 per cent of the cuts used are USDA prime beef. Tasmanian grass-fed beef is also on offer.

After being seated, we were offered still or sparkling water. As we sharpened our steak knives, we were stopped short by an aromatic breadbasket, which neither my companion nor I were able to resist. We ate a whole loaf of rye spread with a tasty XO-infused butter.

Service was swift and attentive, our appetisers coming within minutes of having devoured the bread. Our first starter was crab and avocado with lemongrass gazpacho. The refreshing tang of lemongrass paired well with the dense chunks of avocado. Crab and avocado with lemongrass gazpacho

Chilled foie gras arrived next, served with a floral sauternes jelly and strawberry purée on fluffy cakes of brioche. The combination of light, fruity pairings created a balance to the heavy foie gras and acted almost as a palate cleanser.

At last, the star course arrived. At 26oz, the rib eye was a steak and a half – in no uncertain terms a dish to be shared. We weren’t asked how we’d like it cooked but it arrived tender, juicy and medium rare. To accompany our main, we opted for a decadent potato and truffle gratin, whole slow-roasted sweet onion with olive oil and roasted brussel sprouts and bacon. Aside from the meat selection, the range of condiments might be the restaurant’s pièce de résistance; eight choices of mustard were on offer, including the quirky madras curry mustard and red wine mustard. Dijon, normally my favourite, seemed a bit dull in comparison. A large range of salts was also on offer, from Pink Himalayan to the charcoal-infused Black Lava salt. Side dish: roasted brussel sprouts and bacon served in a mini copper pan

For dessert, we were overambitious with a classic New York cheesecake, which was too filling after such a heavy meal although velvety rich and moreish. If you’re a steak connoisseur, this will be your mecca. Impress clients with the sizeable portions and superb cuts. 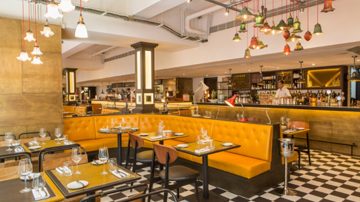 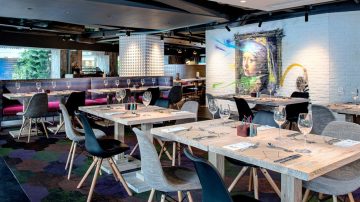 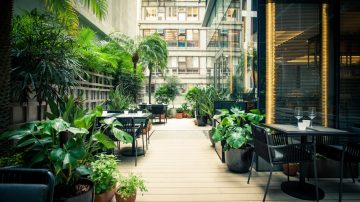 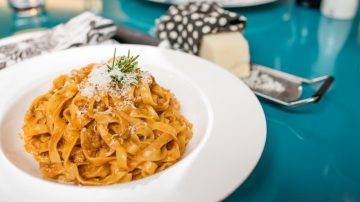