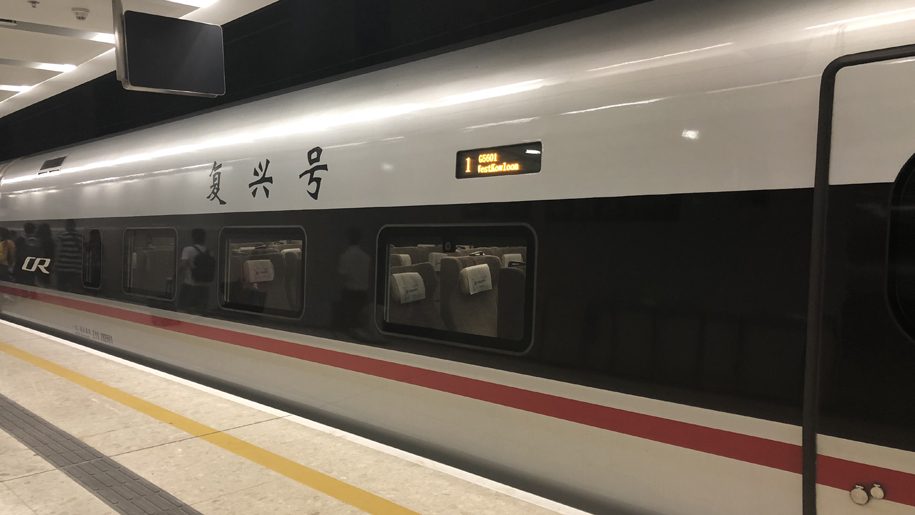 The high-speed rail reduces the time needed to travel from Hong Kong to Shenzhen and Guangzhou, and it’s now the fastest option to travel to both cities from Hong Kong. The shortest high-speed rail journeys to Shenzhen North Railway Station (Shenzhen North, also known as “Shenzhenbei”) and Guangzhou South railway station (Guangzhou South, also known as “Guangzhounan”) take a mere 19 and 48 minutes respectively.

Business Traveller Asia-Pacific has previously published a guide on how to use Hong Kong West Kowloon Station and tips about taking the high-speed train. This time, I took the train from Shenzhen North to Hong Kong to experience the return journey from the Mainland, as well as the business class seats on China’s high-speed rail.

It must be made clear that not all the high-speed trains have business class seats. They (as well as premium class seats) are only available on some Mainland trains; for example, the “Fuxing Hao” train, while the new eight-car “Vibrant Express” train, also run on the XRL, is equipped with only first and second class seats. Therefore, you’ll need to check whether the train you’re going to take has these kind of seats available.

Shenzhen North is a large railway station and a major transfer station and terminus of important routes like the XRL and Xiamen-Shenzhen railway. Before entering the station, remember to have your identity document and ticket ready for inspection, and then pass security. I arrived at the station at around 5pm, and in less than five minutes, I finished both the identity and security check.

Passengers holding business, premium or first class tickets have access to the business class lounge in the station (only large railway stations are equipped with these kind of lounges). After entering the station, you’ll soon notice a directional floor sign that looks like a red carpet extending all the way to the centre of the station, with the words “business class lounge” written in Chinese and arrows serving as a guide to lead you to the lounge. 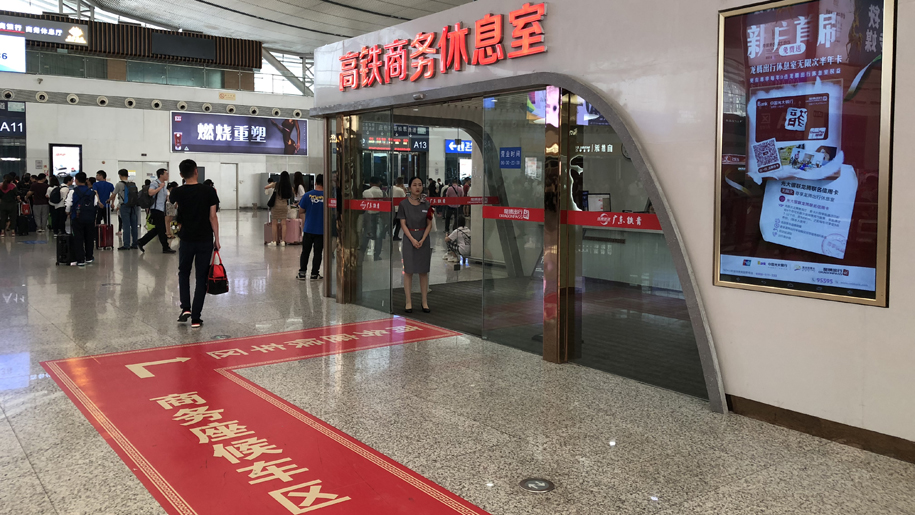 The lounge at Shenzhen North is situated near Gate A12, which happened to be the one used to board my train. I was asked by a member of staff to show my business class ticket for verification before entering, and then she marked down my train number and departure time so that other staff members could call for me, reminding me to leave for the gate in advance.

The lounge isn’t too big, but it wasn’t fully occupied when I visited. It’s divided into a main hall and a smaller room, with the latter providing more privacy. A limited selection of snacks (mostly biscuits and choco pies) are available, as well as tea bags, instant coffee and cartons of various soft drinks. There are some Chinese-language magazines that passengers can read within the lounge only, though there are no English-language publications. There is Wi-Fi available. 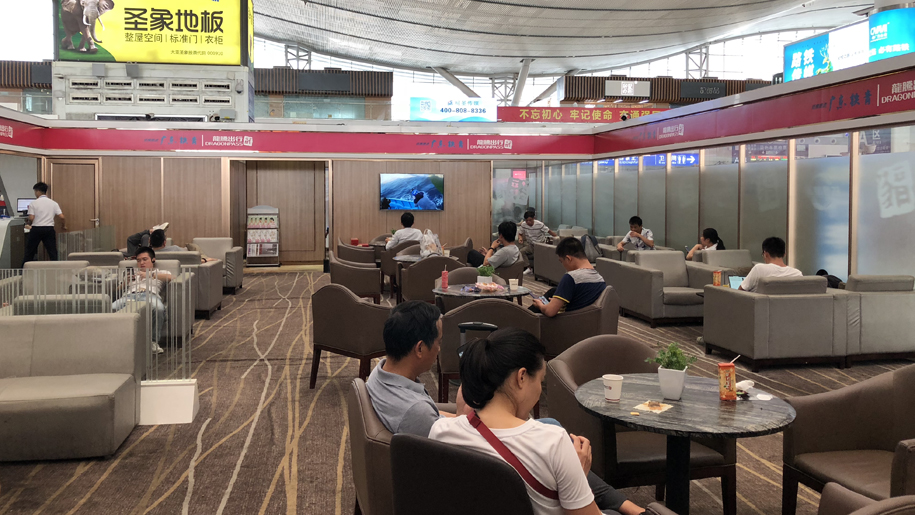 While it is a little small, I would say the Shenzhen North lounge is better than the business lounge in Hong Kong’s West Kowloon Station (pictured below). 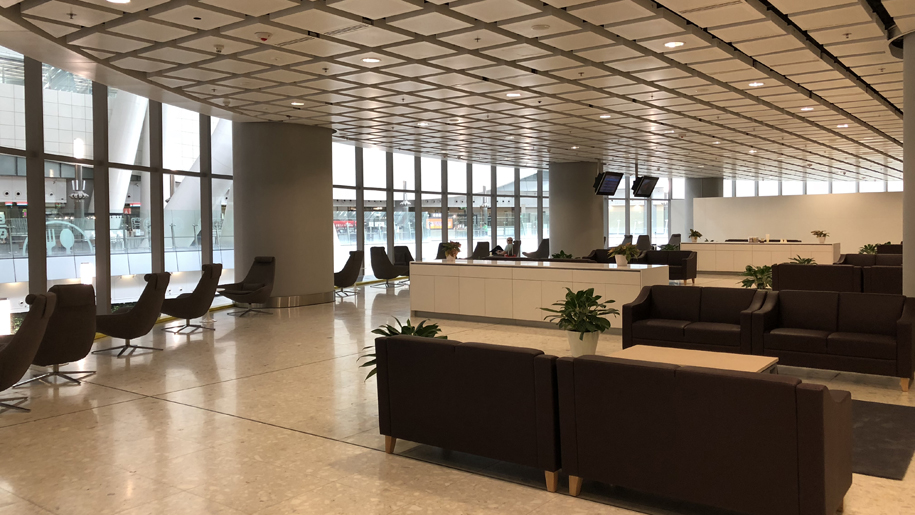 Though the lounge itself was quite spacious and clean, there weren’t any food offerings (even snacks) except some tea bags and a hot and cold water dispenser. There are also no restaurants or stores selling food or drinks in the Departure Hall. When I visited the lounge at around 1pm on a Wednesday afternoon, there were no more than five people (including me) sitting there, so at least you can go there for some peace and quiet, if not a bite to eat.

In China’s railway stations, there are usually two boarding gates, labeled “A” and “B” with the same number; for example, Gate A10 and B10. In fact, both gates can be used to board your train. The only difference is that one of them will be closer to the car you’ll be sitting in. The gate you are supposed to go to will be shown at the top right-hand corner of your train ticket. This time, the gate I needed to go to was A12.

Business class passengers can use a special channel next to the automatic ticketing gates to skip the long queue. This special channel is also available to passengers requiring special assistance (like wheelchair users), as well as Chinese soldiers, frequent rail travellers, as well as those holding a red paper ticket – an old type of train ticket that you’ll probably get from a manned counter in an old station. Different from the blue magnetic ones commonly seen nowadays, these red tickets cannot be used to go through the automatic gates. It seems that the boarding gates at Hong Kong’s West Kowloon Station are not equipped with this channel. 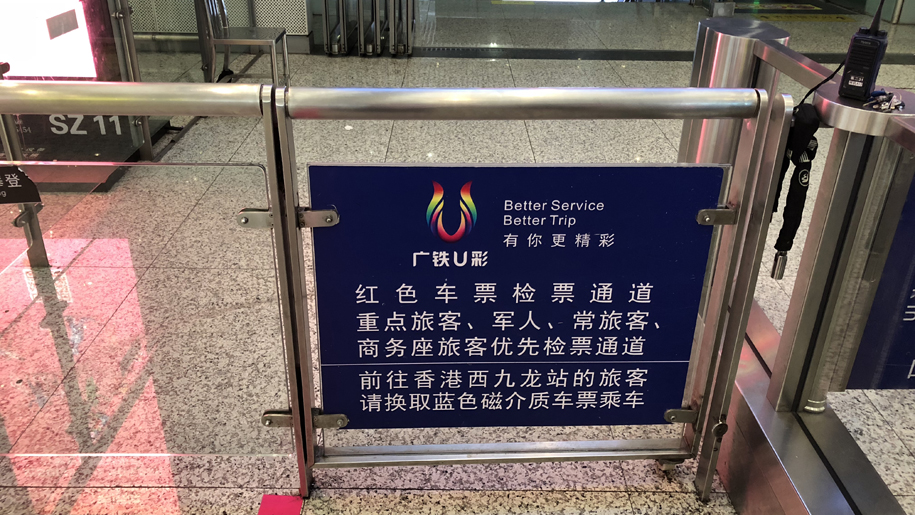 When I arrived at the gate, no one else was using this special channel. As soon as boarding began (15 minutes prior to scheduled departure time), I showed my ticket to the staff member for verification, and then I was able to be the first passenger to take the escalator down and board the train.

The train I was taking this time, a mainland “Fuxing Hao” train, has two cars for both business and first class seats: one at the front of the train and the other in the rear. I was in the one (car 1) in the front. 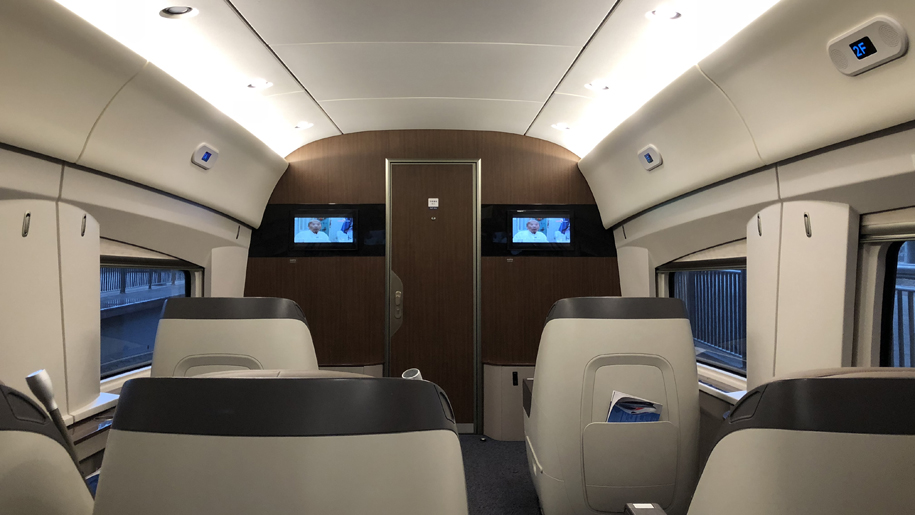 The business class seats are eggshell-shaped and upholstered in leather, with a cushion and an adjustable reading light. They can recline to a fully-flat position. Though no USB ports were available, there was a power socket below one of the armrests. Inside the opposite armrest, there was a foldable tray table mounted. There were no luggage racks above the seats, but given the sizeable space inside the carriage, this was not a problem at all. 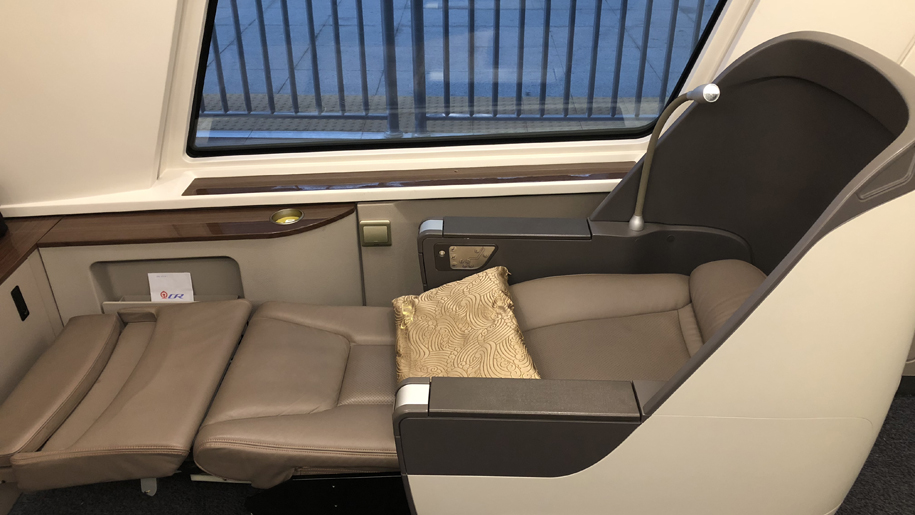 Other facilities in the car include some Chinese-language newspapers and magazines placed at the back of the seats, two small TVs in the front of the car and another two at the back broadcasting rail-related programmes, and an LED sign at the back showing information about the journey, including the current speed of the train. The highest speed of the XRL allowed in the Hong Kong section is 200km/h, while that in the Mainland section can be as high as 300km/h. 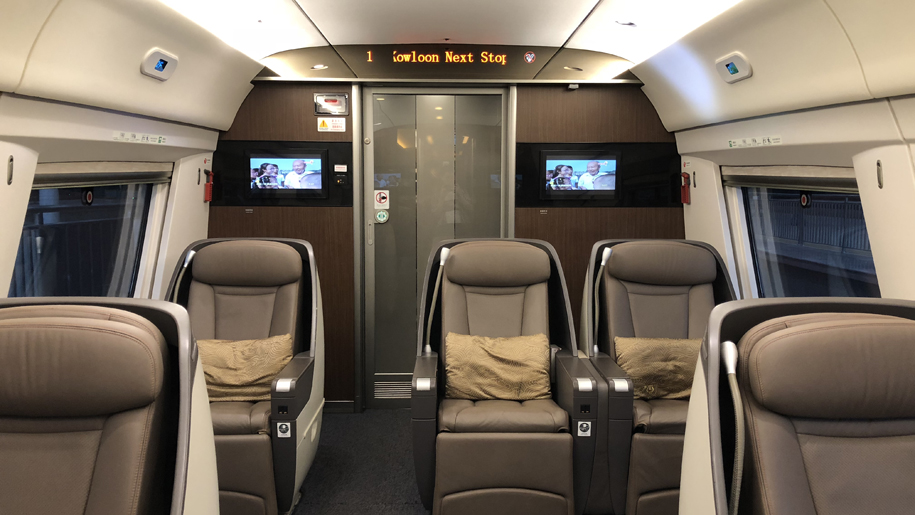 The train departed punctually from Shenzhen North at the scheduled time of 6:18pm. As soon as the train started to move, a train attendant came in and brought me a wet towel, a bottle of water and a little box of snacks (including a piece of almond biscuit, pineapple cake, peanut brittle, ginger candy and dried tangerine peels). During mealtimes, business class passengers are supposed to get a complimentary meal. But as it was only a 19-minute ultra-short-haul journey, it made sense to only offer passengers some snacks instead. 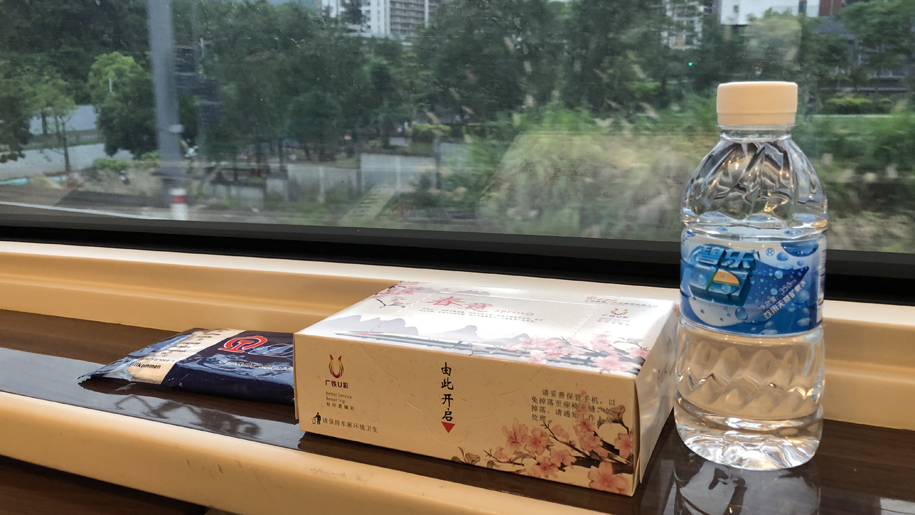 I was the only business class passenger in the train, so I was glad to enjoy nearly 20 minutes of free time without being disturbed by crying babies or loudly talking passengers. However, the journey between Shenzhen North and Hong Kong’s West Kowloon Station is mostly an underground one except the first two minutes after train departure, so there’s actually very little to see from the large windows during most of the journey.

Passengers have access to a free Wi-Fi service (called “高铁WiFi”) on board. But in order to use it, you need to download the app “掌上高铁” (which literally means “high-speed rail in your palm”), in advance – and the app is available in Chinese only. You also have to sign up with a valid Mainland phone number for verification.

The train arrived at West Kowloon Station at 6:37pm, exactly the scheduled arrival time. The immigration checkpoints for the Mainland and Hong Kong are both situated in the station, so it didn’t take me a long time to go through both of them before leaving the station before 6:55pm.

It was indeed a really comfortable journey thanks to the individual leather seats that can rival the business class seats in the planes, as well as the private space in the car with a maximum of five passengers. But this kind of comfort is reflected in the price – RMB226 (US$33) for the 19-minute journey. A second-class (the lowest class available) ticket is only RMB75 ($10.86), so a business class ticket is more than triple this price. If you just want a little more of a premium experience but don’t want to pay so much extra, perhaps you could try the first class service, which costs RMB120 (US$17.37).

What’s more, there are not many perks you can get from paying the extra money for business class. The lounge in Hong Kong has nothing to eat, and even on board you only get a little box of snacks. Therefore, unless you are desperate for privacy and comfort, I would say it’s not really worth splurging on such a short journey.