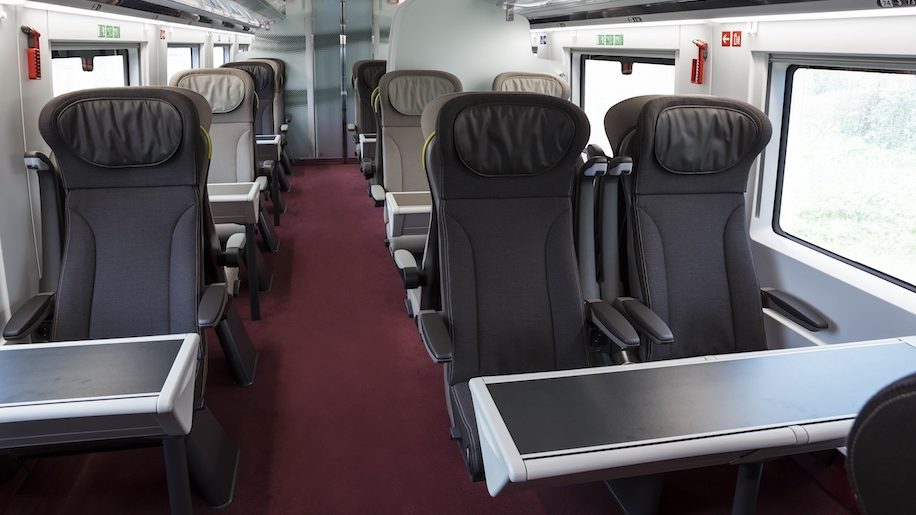 Eurostar operates up to 19 services a day in each direction between London and Paris, served by a fleet of new E320 trains. Later this year it will introduce a direct route to Rotterdam and Amsterdam. A new Business Premier lounge at Paris Gare du Nord opened in February 2017.

After receiving my booking confirmation before my outbound London-Paris journey (click here for a review), I logged on to the Eurostar site, selected my seat and ordered a vegetarian meal for my return journey in Business Premier. I then downloaded the Eurostar app and filled in my details. This allowed me to access my mobile boarding pass and save it to my Apple Wallet for use off-line.

Business Premier passengers can check-in up to ten minutes before departure, or 90 minutes if they want to use the lounge first. The luggage allowance for three pieces up to 85cm long. I arrived at Gare du Nord station at 1630, taking a set of escalators from the ground-floor concourse up to where French and UK border control security is. A man held up a sign warning against carrying weapons and bombs.

There was a separate fast-track lane for Business Premier travellers, so it was all very speedy. There is no liquid ban or requirement to remove laptops when putting luggage through X-ray machines so it is all very quick and efficient. My Eurostar train was departing at 1813 so I had plenty of time to use the new lounge upstairs to the left.

Opened in February 2017, and designed by architectural firm Softroom, the lounge is now on the top floor of the 19th-century station, and has far more style, class and character than its predecessor. I particularly liked the effort that had been made to bring in experts from the UK to collaborate – there are drinks designed by the London Cocktail Club, catering from Michelin-starred chef Raymond Blanc (who has also helped craft a bespoke gin called Tourjours), and artwork from London’s Hospital Club.

Click here for a full review of the new Business Premier lounge.

At 1755 I got up and left to get my train, taking the lift back down and heading across to my departure platform, which came up on one of the nearby departure screens. I was in coach 1, seat 31, which was a long walk to the far end. There are 16 coaches on the new E320 trains (18 on the refurbished E300s). Coaches 1 to 3 and 14 to 16 are for Business Premier and Standard Premier seats (same seat, different service), while coaches 4 to 13 are for Standard class. (Here is a link to the seating plan.)

I was in backward-facing window seat 31. Business Premier slimline seats are arranged 1-2, with some configured as sets of four or two around a shared table. This means the carriage has a wider aisle than in Standard class, which has seats in a 2-2 layout. There are plenty of places to store luggage and the carriage felt light and comfortable. 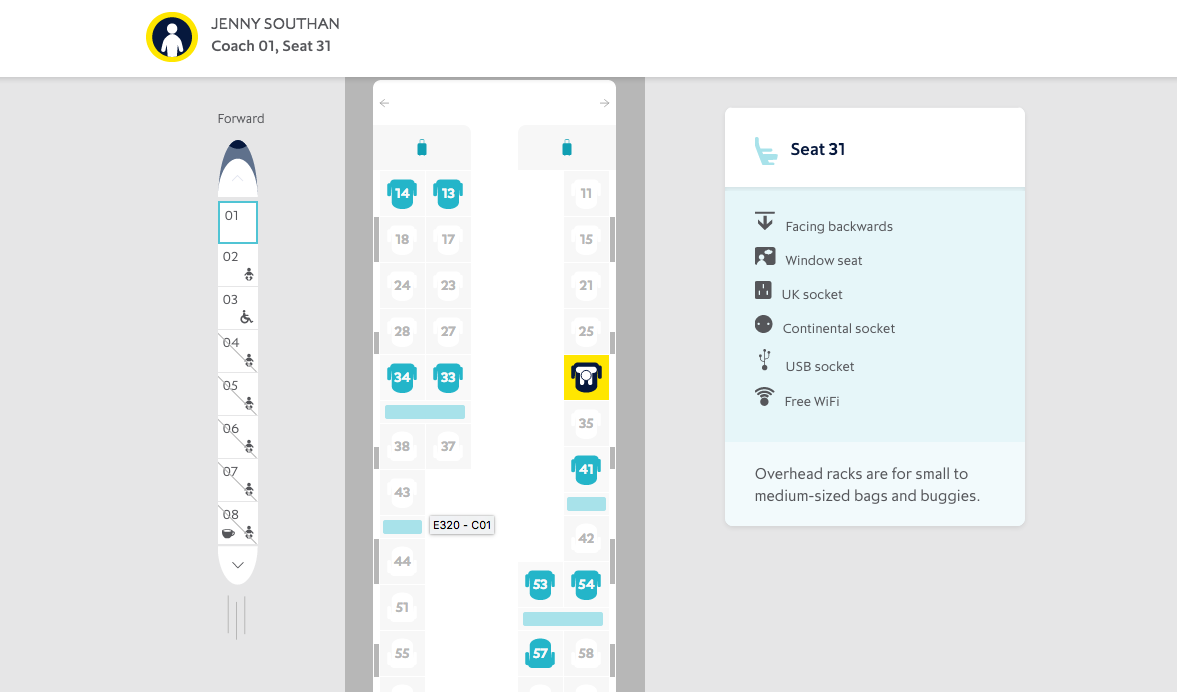 There is in-seat power (both UK and continental) in all seats, fold-down tray tables and free wifi. If you download the Eurostar app in advance, you can stream free movies (this worked brilliantly), get information on the progress of your journey, watch the news, see information about your seat and view the onboard menu. There is also a menu of bespoke “soundscape” music to relax or energise you.

I really like the solo window seats, and would always opt for one facing forwards if possible, although it my case it was backwards. If you are travelling with a colleague or small group, opt for seats around a table.

The train departed on time, and within a few minutes the dinner service began. I started with a Bloody Mary, which was nice and spicy. The food came soon after. Meals have been designed by renowned chef Raymond Blanc, and I was really impressed with the quality.

My tray was delivered with a starter of zesty, fragrant tabbouleh salad, along with a piece of blue cheese and an apricot, fresh olive bread and a fresh lemon tart (wonderful flavour with good pastry). I was then given a choice of mini bottles of French wine (I opted for a bottle of the red, as can be seen in the picture.) There was proper metal cutlery and a cloth napkin. 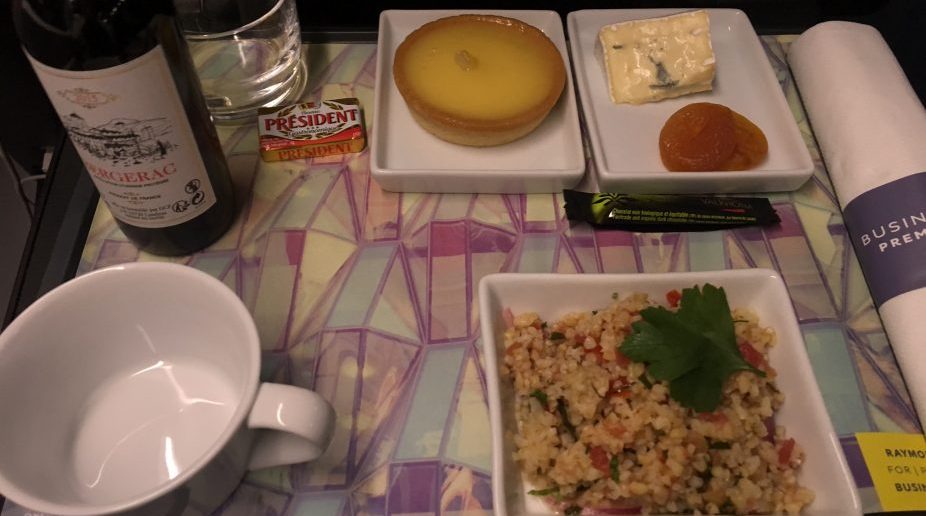 The main course was a slice of delicious aubergine lasagne in rich tomato sauce with grilled artichoke. I really enjoyed the meal while watching a film via the Eurostar app on my iPhone. (I couldn’t get it to work on my laptop despite the Eurostar homepage showing up when I logged on to the wifi.) Staff were very friendly, efficient and generous with the alcohol. 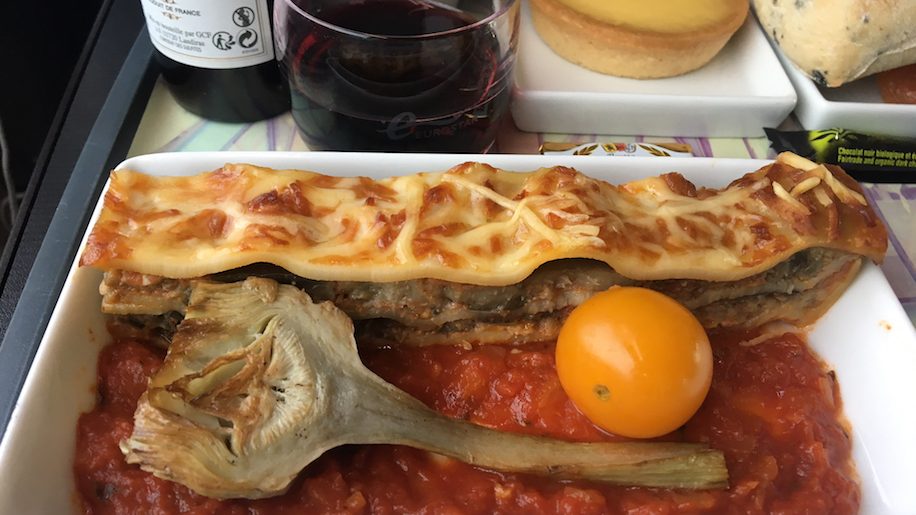 The train arrived at 1950 local time, a little later than the 1939 scheduled time. If you speak to a member of staff in advance, during your journey, they will book a taxi for you who will be waiting with a sign. I was happy to get the Tube though. There is no border control so you can go straight out.

A superb, stress-free journey, greatly enhanced by the new Business Premier lounge, the excellent Raymond Blanc food onboard and clever entertainment streaming. The whole journey was far better than flying.

PRICE Internet rates for a midweek return Business Premier class fare from London to Paris started from £490 in September. (Changes to your ticket can be made for free.) 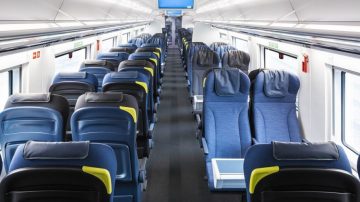