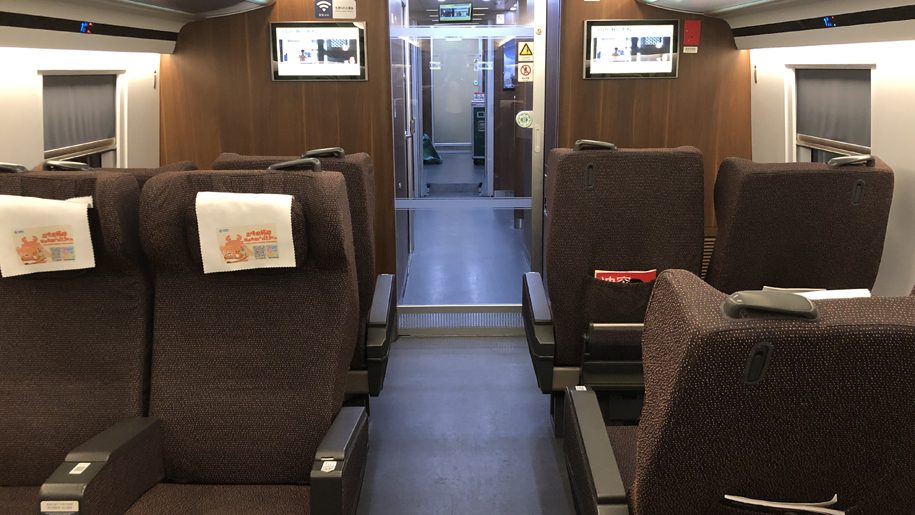 Hopping on a plane has long been the default option for business travellers shuttling between the financial centres of Hong Kong and Shanghai. Before China’s high-speed rail network connected the special administrative region with the mainland in September 2018, the only non-stop rail option that would take you straight from Hong Kong to Shanghai (or the other way around) was the Shanghai Kowloon Through Train, which takes around 18 hours and involves spending a night onboard the train – which is obviously impractical for most people travelling for work.

Now, the journey can be done in just eight-and-a-half hours by high speed rail. While this may still seem like an awfully long time, there are two reasons why it could be a good choice for business travellers. Firstly, the air route between Hong Kong and Shanghai, as with many air routes in China, is notorious for delays, though things are slowly improving. Still, Business Traveller Asia-Pacific has heard plenty of anecdotal evidence about monstrous delays on what should be a short two-hour hop that have led people to miss meetings.

Secondly, the rail journey, which especially if you get a window seat, allows you to observe a vast swathe of the country  roll by from the comfort of your seat, helps put China’s vast landscape into perspective. The train passes through lesser known cities like Jinhua, Shangrao, Nanchang, Changsha and Shaoguan, which you would usually just fly over without realising it. In that sense, it’s probably more interesting than taking the plane.

It’s worth noting, however, that this is a long journey, and internet access can be sporadic as the train weaves through tunnels (more on this later), so it’s best to bring a book, or a laptop to do some offline work.

The bullet train departs from Shanghai Hongqiao, a major railway stations in Shanghai right next to Hongqiao Airport in the in Minhang district of the city. I was able to reach the station from my hotel, Four Seasons Shanghai, located in the city’s Puxi neighbourhood, in about 35 minutes. I arrived at the station about 40 minutes before my train departure time of 1410.

One of the great aspects of train travel in China is how little time you have to spend in a security lines compared to going through airport security. Getting through here was a complete breeze: I got through both the immigration and security (where my baggage was scanned) in about ten minutes. I then made my way to the boarding gate after checking my train number against the large TV screens at the station.

I was at my gate (6b) early and had about half an hour to kill. The waiting area was packed and there were no available seats. 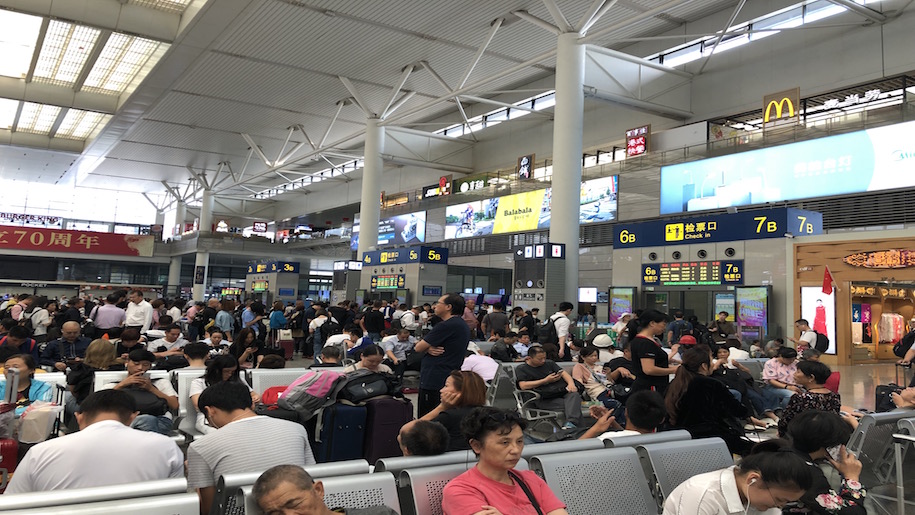 There was a Relay shop near the gate selling things like magazines, headphones, chargers, stationary and water bottles. 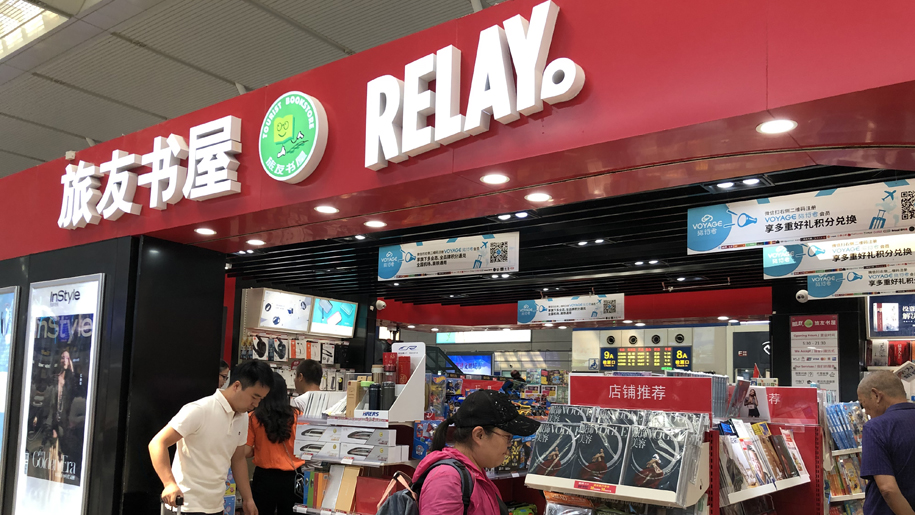 A mini cart was selling snacks like chips, bread, dried fruits, and tea. Behind the cart, there were a number of vending machines also stocked with snacks and drinks. 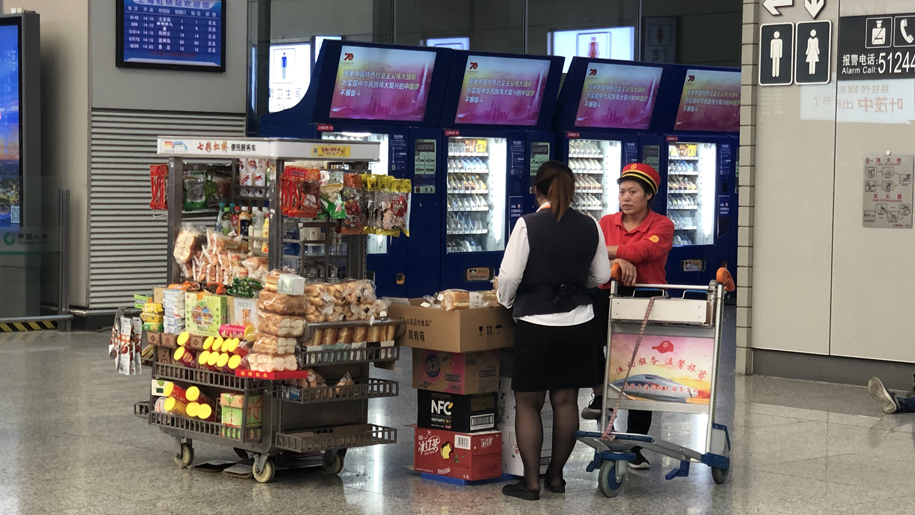 I noticed there were a number of fast food outlets such as Mcdonalds and a Subway on the floor above the departure gates (on level 3). Since food on the train is purchase-only, perhaps it’s a good idea to grab something to go for this eight hour journey.

Lines had already begun to form around the ticket barriers where passengers must scan their tickets before entering the railway platform. There was no designated line for first class passengers. Once the doors had opened, it took me about 10-15 minutes to get past the ticket scanners and hop on board (there are labels on the train specifying where each cabin is located).

This high-speed train has four classes (in order of least to most premium): second class, first class, premium class, and business class. I was in the first class car.

The dark brown seats, arranged in a 2-2 configuration, are wide, simple in their design, and almost feel like sofa chairs. There’s a table that pulls out from the side of the seat, making it easy to set up a laptop or eat a meal. The lighting here is bright but warm-toned, and there is an automatic door dividing the cabin from the two bathrooms and sinks.

Here is a look at the car from the front: 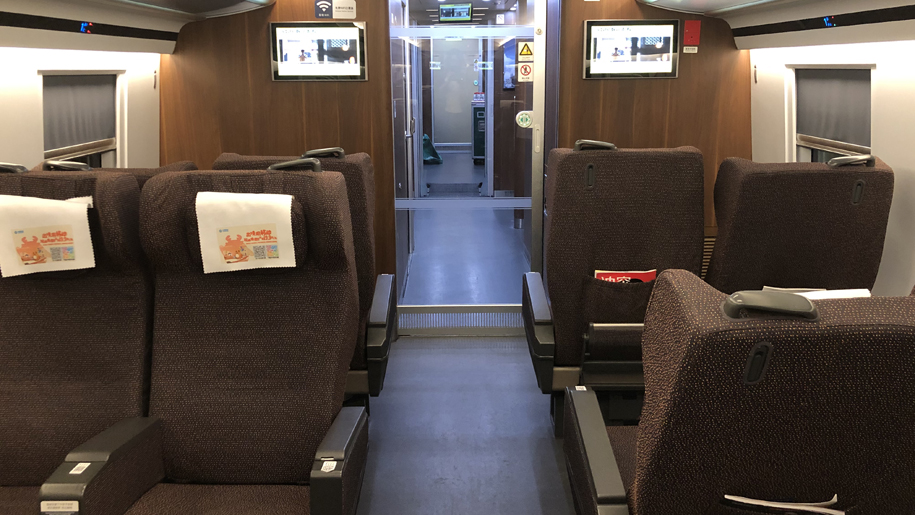 Here’s from the back: 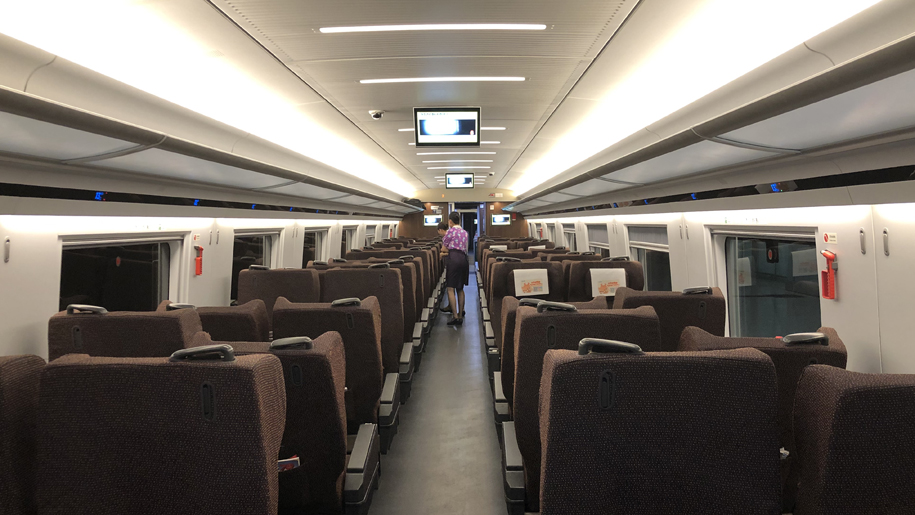 A closer look at the seats: 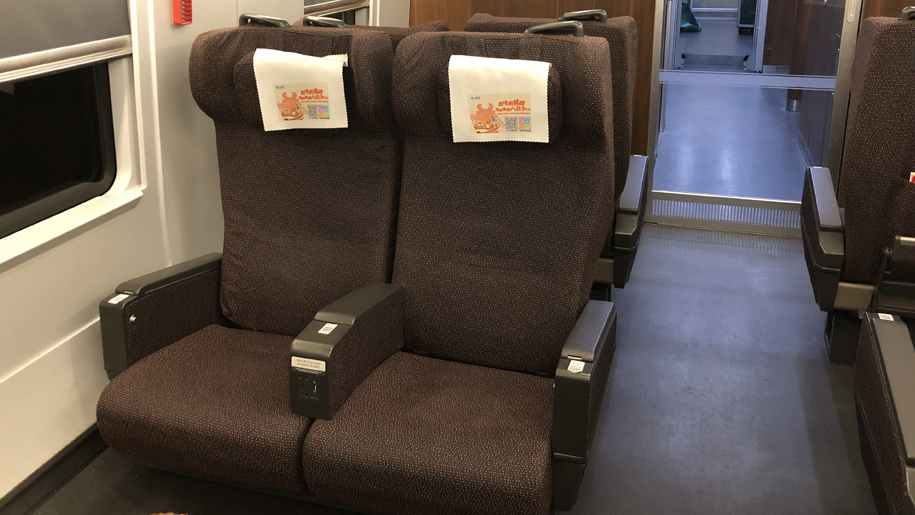 The footwell is spacious, with a little stool to place your feet on. 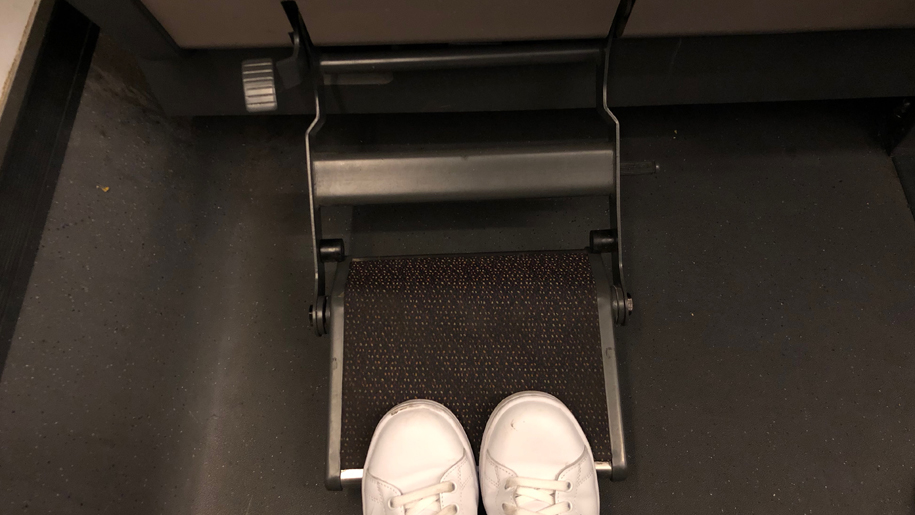 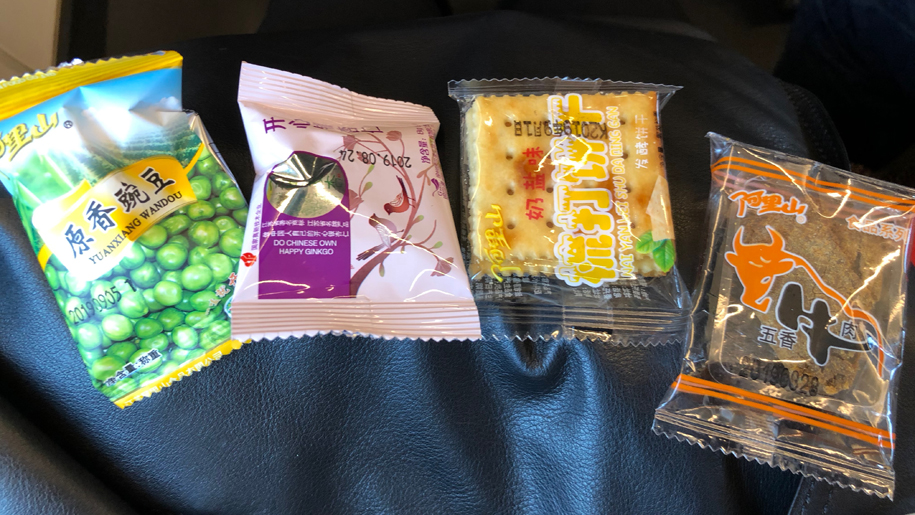 …as well as a Nongfu water bottle… 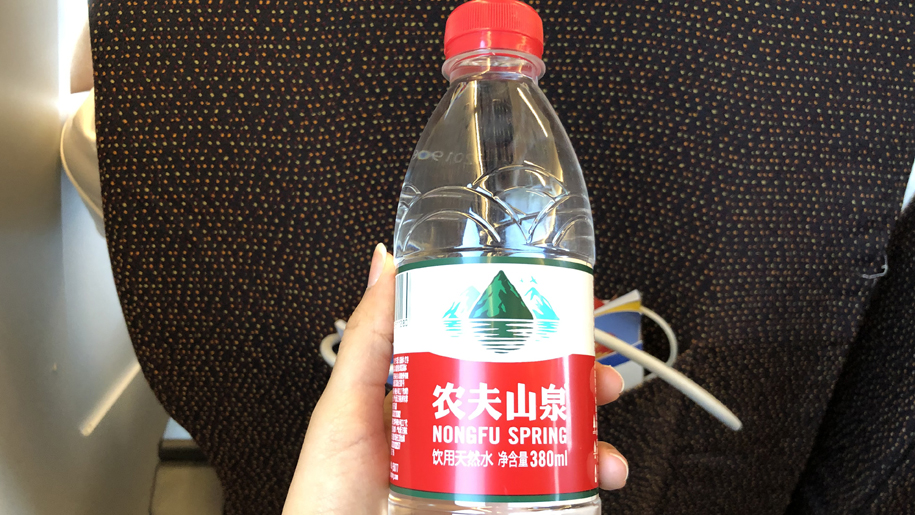 There’s the following outlet with a USB plug in port that came in very handy. 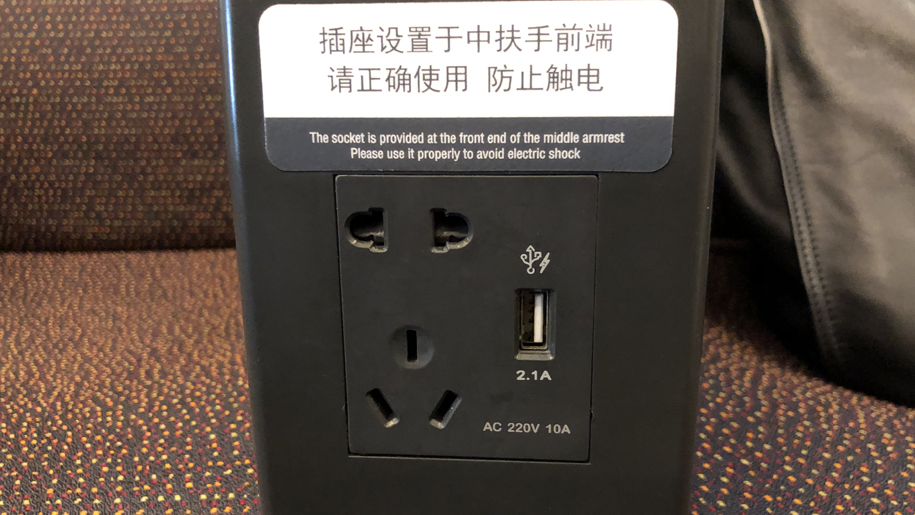 For luggage, there’s an overhead storage rack for smaller, hand-carry luggage and backpacks, and there is a storage area when you enter the car for larger baggage.

My seat was a little dirty – there was an empty packet and crumbs lodged between the seat and wall. 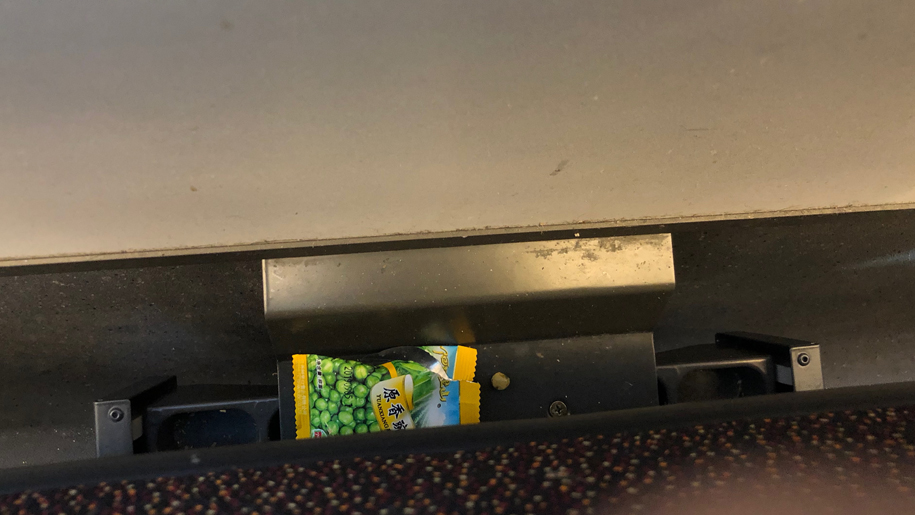 Most of the seats in my carriage were occupied. There were two couples sitting in the row behind me who sounded like they were from the UK, and a Chinese man seated beside me who kindly helped me with my luggage and tried to make small talk, but since I can’t speak Mandarin, he gave up.

The train departed on time. About 20 minutes into the journey, a train attendant came by carrying four different boxes of fruits that cost 25 RMB (US$3.54) for a box.

We reached Hangzhou in about 30 minutes. An announcement was made, and we waited for six minutes here as some people got off the train and new passengers got on. Another announcement was also made to remind passengers not to talk loudly on their phones.

Throughout the train journey, I tried to connect to the wifi service, but I couldn’t access it through my phone. I used my data service instead, but it was patchy as we went through several small tunnels throughout the journey. This could potentially be frustrating for travellers who need to stay connected on long journeys, but if you don’t have a need to be constantly connected, you’ll certainly enjoy the view outside the window as the train races through different parts of China. I saw farms, ponds, lakes, mountains, dense cities, factories and even some flower fields.

I arrived in Hong Kong West Kowloon station at around 10:30pm and it took about half an hour to clear both the mainland Chinese exit check and the Hong Kong immigration.

Though this was a long journey back to Hong Kong, one of the best aspects of train travel is that in many ways it’s quite hassle-free compared to flying  – you don’t have to show up hours in advance to endure long security lines, lengthy boarding times, and possible flight delays. The train was punctual, the seat was comfortable, and it was also a pleasurable and smooth trip with interesting views that take you through different landscapes in China. However, my internet access was unreliable and business travellers hoping to stay productive and connected on long commutes might find this to be an issue. 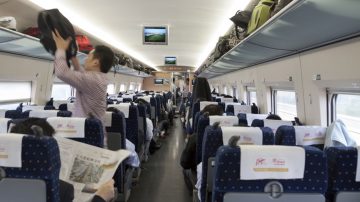 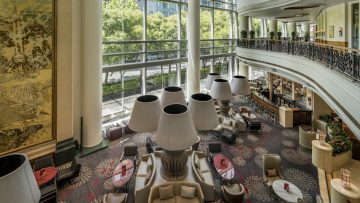 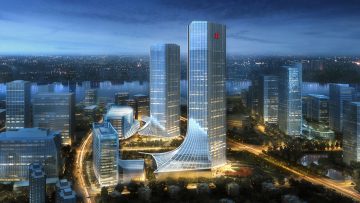