I flew into Tehran on one of BA’s new London Heathrow flights, which were launched on September 1, 2016, after a gap of four years. I then needed to take an internal flight on to Isfahan, the next day. 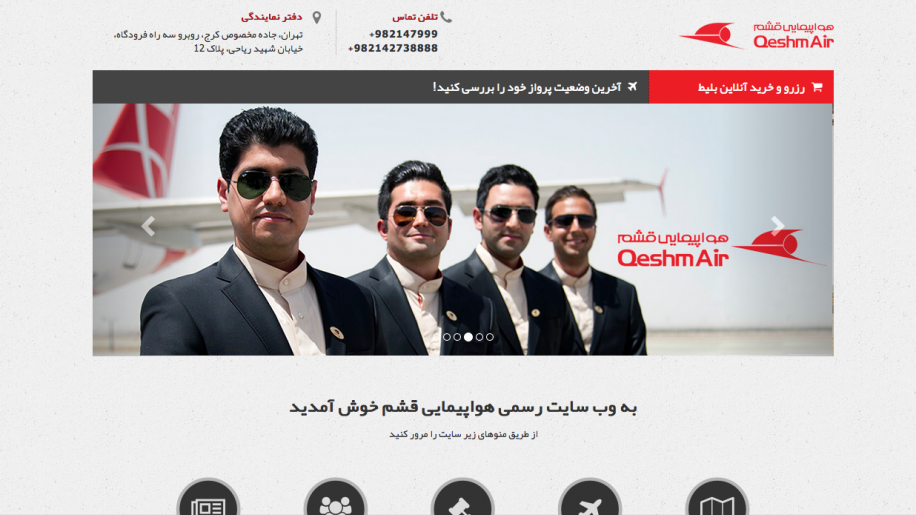 I was also relieved I was not travelling with Iran Air as I am aware that it has a poor safety record – that said, this summer the EU lifted most of its restrictions against it. Qeshm Air, apparently, passed muster.

[To clarify, the EU had, until recently, banned certain aircraft from flying into the European Union. An article on bloomberg.com in June stated: “Iran Air will be allowed to use all its aircraft except Boeing Co. 747 and Fokker 100 planes when flying in the 28-nation EU, the European Commission said on Thursday in Brussels. Previously, Iran Air had been permitted to use only 10 Airbus Group SE A300 and two Airbus A310 planes in Europe.”

EU Commissioner for Transport Violeta Bulc said: “Following my visit to Iran in April, a technical assessment was successfully carried out in May. Based on this I am happy to announce that we are now also able to allow most aircraft from Iran Air back into European skies.“]

I was scheduled to fly on the 0535 Qshem Air service (flight number 1280) from Tehran’s Mehrabad domestic airport to Isfahan (also spelt Esfahan). The Iranian carrier launched in 1993 (originally as Faraz Qeshm Airline) and offers several flights a day between the two cities. The journey takes 55 minutes.

Tehran Imam Khomeini International Airport is 30km south-west of the Iranian capital, while Mehrabad is more central (handy as traffic can be bad). In any case, as I was getting there so early in the morning the streets were empty.

As I was travelling with a small group, it was not down to me what time we arrived at the airport for check-in. If it had been, I would have arrived earlier than 0450, 40 minutes before departure, which is when we turned up (our driver insisted on showing us the Azadi Tower monument en route).

We had to go through security screening on arrival into the terminal with a separate channel for women that was sectioned off from view. I didn’t have to remove my headscarf. Liquids were not an issue and laptops didn’t have to come out either.

Once at the crowded check-in desks a short distance across the hall, we found we had to have all our cabin cases loaded into the hold – you can only take briefcases and hand-bags or small rucksacks in the cabin, not trolley cases. There appeared to be no extra charge for this or limitation on the fact that one passenger had one large suitcase and a second smaller one.

No passports were checked at this point. All suitcases belonging to the group were piled on top of each other and weighed. They were also tagged and boarding passes issued. There is no online check-in for Qeshm Air.

We then went upstairs at 0507 where passports were checked and we went through a second security zone where bags were X-rayed (again there was a separate channel for women). The airside departure area wasn’t huge but there was seating and a couple of shops and a juice bar of some kind.

Our flight was boarding from Gate 13 – the flight only appeared on the screen at about 0510. Boarding started not long after via a scruffy airbridge down to an awaiting transfer bus.

It was still dark. Once everyone was on board, there was a short shuttle to the aircraft where everyone piled off and charged up the steps to the front of the small four-engine plane.

Upon entering, I noticed a sticker on the galley wall showing it was an old BA Cityflyer aircraft – an AVRO-RJ100/85 (I wasn’t 100 per cent sure which version).

There was some mix up with a few people’s seats – some passengers near me were sitting in the wrong rows (seats are preassigned and indicated on the boarding pass.) 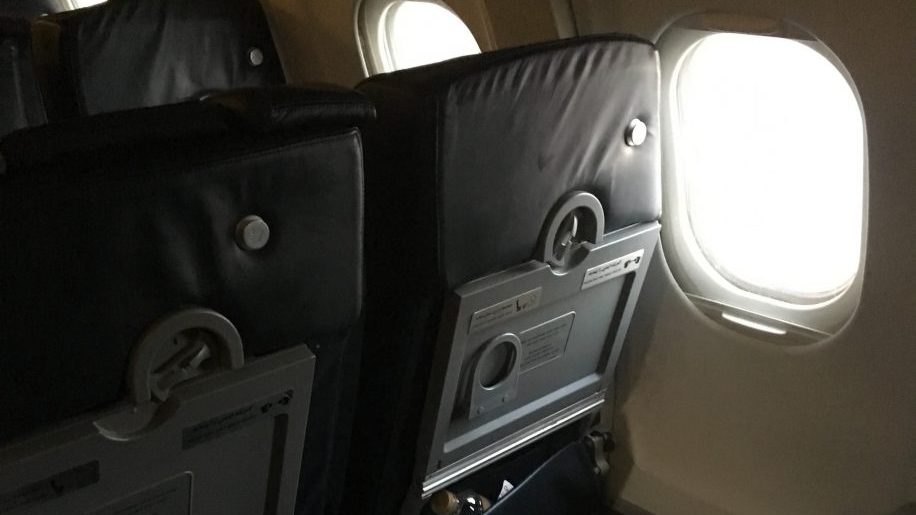 This aircraft has 19 rows (including row 13) of economy class seats. The product is arranged 3-3 (A-B-C, D-E-F) and is upholstered in black leather, which looked quite smart.

There are fold-out tray tables with cup holders – typing on a laptop is very cramped when you have someone next to you (I was in a middle seat which was even worse).

As far as I could tell there were no extra legroom or business class seats. This early morning commuter flight was full so I felt pretty cramped in middle seat 13E. 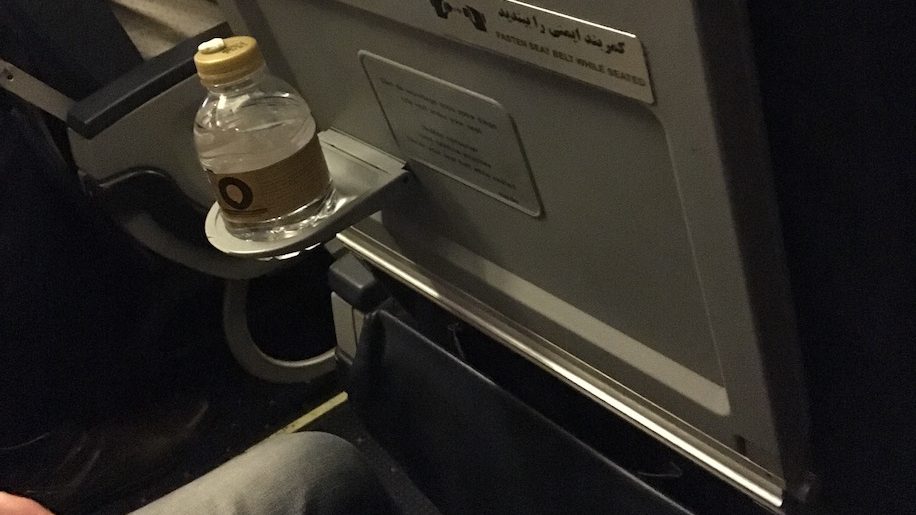 The most legroom is in row one behind the bulkheads so these are the best seats – plus you can disembark first. Aisle seats are a good option as these give you the most elbowroom and speedy access to the overhead lockers when it comes to disembarking.

Despite a fairly late boarding, we pushed back at 0540, and take off was at 0550. The airport was very quiet and empty so it didn’t take long to get a slot. Breakfast was served to all passengers free of charge at 0610 – there was a processed croissant, white roll, carton of orange juice, some carrot jam (popular in Iran), water, chocolate and cream cheese. 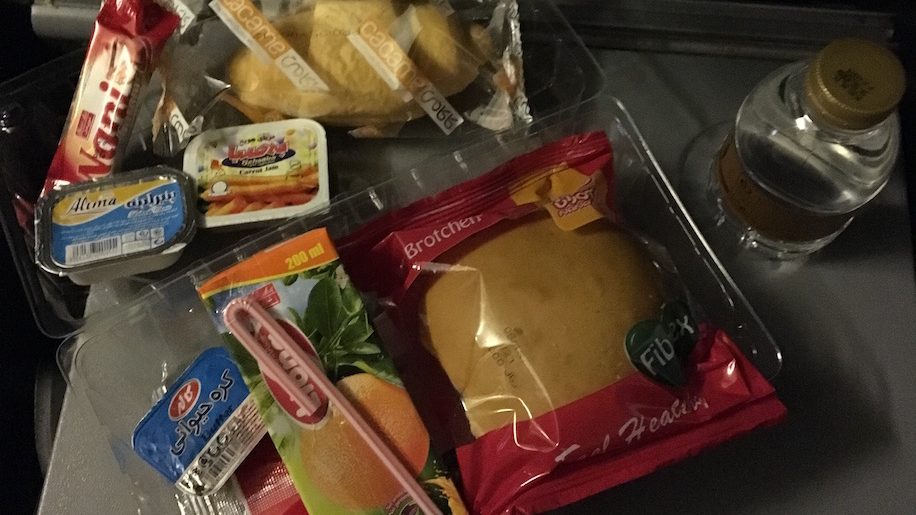 I was surprised to be given anything on this short flight but the quality was pretty poor and there was a lot of unnecessary packaging. Rubbish was cleared away at 0620, five minutes before we began making our descent. Female crew wore red uniforms with pale pink headscarves and were smiley and efficient. I felt relaxed and confident in their operation despite some mild anxiety initially.

We landed at 0635 with a short taxi to standstill. The airport was very quiet and empty. Passengers exited from the front down a set of steps in about five minutes, where a pair of buses were awaiting. 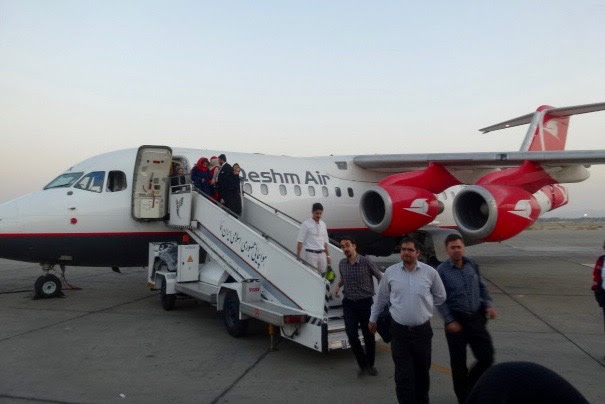 Isfahan was a very quiet airport and the short drive to the terminal seemed unnecessary – we could have walked in a few seconds.

Once inside, we had to wait about 20 minutes for our bags. (Sensibly, most other passengers travelled with hand-luggage only.) There was no need to have documentation checked upon leaving.

A perfectly good Iranian commuter flight with friendly, efficient service. When an English language version of the Qeshm Air website launches an it will be much easier to arrange one’s own travel on this airline. 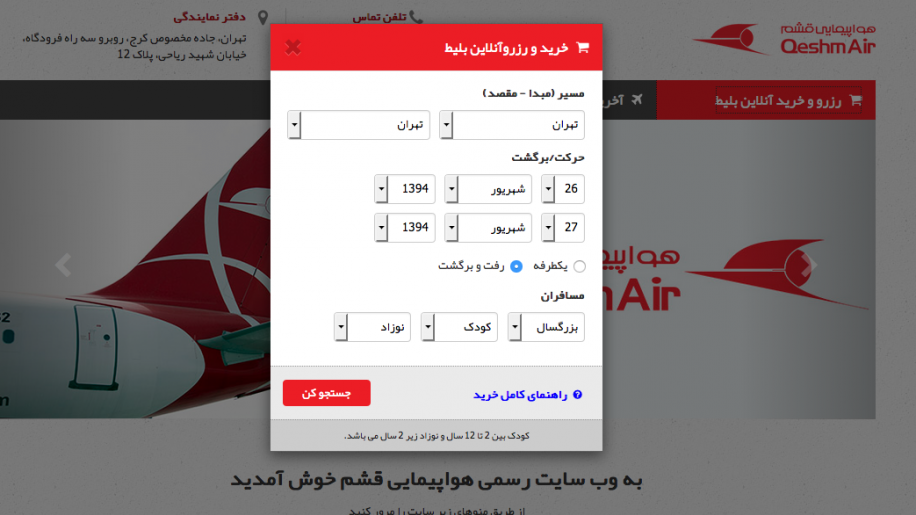