This was a return flight on the all-business class A319 introduced by Qatar Airways on the London-Doha route in May. The “Business One” service departs Doha as QR15 at 1450 to reach Heathrow T4 at 2025.

Note that this is the shortened magazine version of this review.

The full review can be read below

The outward flight takes off at 2155 and lands in Doha at 0640 the next morning.

You can see the previous review at XXXXXX

I arrived at Doha International at 1300 (on May 27 Qatar moved its operation from here to the new Hamad International). The terminal was quiet and I checked in one bag.

I went down from the lounge to the gate when the flight was called. We were bussed from the terminal to a stand a short distance away. Boarding was completed by 1430. On board, I was offered a drink (no alcohol). The aircraft is configured with one cabin, although because of the over-wing exits it naturally splits into two, with four and then six rows of 2-2 seating (A-C, D-F). I was in 1A.

The design is clever – the general profile of the seats mean the smaller cabin still appears spacious. You have a clear line of sight through the aircraft and, at the same time, don’t feel as if you are invading the privacy of others – the raked angle of the seats towards the window means there is no accidental meeting of eyes. However, the configuration also means you have to step over your neighbour when the seat is reclined (it meets an ottoman in front to form the bed).

The leather seats are a slightly darker purple than on other Qatar aircraft, giving the interior a business jet feel. The table folds out from the armrest and bounces slightly when you work, but was firm enough for dining. There is in-seat power and, over your shoulder, a small storage space for personal items, along with USB and DIN sockets. The Oryx in-flight entertainment system is top class. The flight was also equipped with Onair mobile services allowing SMS texting.

Rows one to five have the roomiest seats. In row five, the emergency exit in front offers greater spaciousness, as the alcove for your feet is wider (the same in row one). If you like window seats and want a view, go for the front of the first cabin – this is ahead of the wing, whereas all the seats at the back have an obscured view. The front of the cabin is also quieter. However, there is only one washroom here, compared with two at the rear.

We pushed back at 1445 and take-off was swift and smooth. The extensive menu included dishes from celebrity chefs. The starters were roasted Roma tomato soup, Arabic mezze, or a selection of balik salmon, smoked tuna and surimi crab in a Niçoise salad by Ramzi Choueiri. The mains were black cod with lemon (by Nobu Matsuhisa); okra and hammour (grouper fish) saloona; marinated chicken breast with morel and tarragon sauce; and vegetable patty, coriander rice and Hyderabadi salan (another type of curry) with aubergine, by Vineet Bhatia. I had the Choueiri selection and the Vineet curry – both were delicious. Desserts included a treacle tart from Tom Aikens. Champagnes and wines included Lanson Gold Label Brut, 1999; Taittinger Prestige Rosé; Dopff and Irion Vorbourg, 2010, Alsace, Grand Cru; Château de Sales, 2005, Pomerol, Bordeaux; and San Felice Brunello di Montalcino, 2006, Tuscany.

In-flight texting worked for a short while at the beginning of the flight, but didn’t for at least three hours. Afternoon tea was served two hours before landing.

We landed 20 minutes early. Immigration was swift and my bag appeared in minutes.

A very good flight with superb service and food. Regulars on the route should note that the flight takes slightly longer than on the wide-bodied fleet. This isn’t an issue on the night flight, but in the daytime you may prefer a shorter journey. The seat is also smaller than Qatar’s normal business class product, so larger flyers might feel a little cramped. Nevertheless, a real treat. 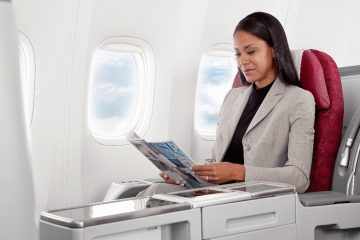 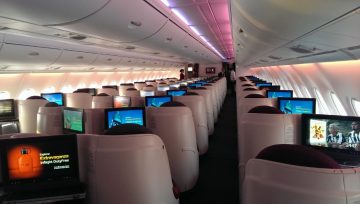 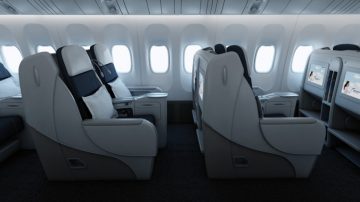 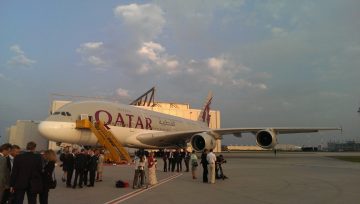