This was a return flight on the all-business class A319 introduced by Qatar Airways on the London to Doha route in May.

To read a review of that night flight, click here. This review builds on the previous write-up, and avoids repeating what was said there. It also focuses on the service, since this was a day flight and therefore the majority of passengers will stay awake for most of the flight, unlike the night flight on the way over to Doha from London.

As background, I should add that having spoken with the Qatar Airways CEO the morning of this departure, I had learned that contrary to what I had previously heard, the flight slot at Heathrow was not a “narrow-body” slot, and if Qatar wishes to, it can use this slot for a wide-bodied aircraft such as a B777-300ER.

Since capacity at Heathrow is so constrained, and slots so expensive to buy, I asked why he had chosen to put on an aircraft with only 40 seats. His answer was that he had a secret plan, but he would not tell me what it was.

We arrived at Doha International Airport at 1300 having just completed a tour of the new Hamad International  Airport. To see 90+ photos of that tour, click here.

This is the last few weeks of Doha International being used for Qatar Airways flights, and the terminal seemed empty, although of course this was more to do with the fact that it was a quiet time of day.

I checked in one bag, and then had a long conversation with the immigration staff about why I no longer look like my passport photo taken nine-and-a-half years ago. Who does?

The premium lounges are at the top of the escalators after business and first. It seemed very strange that these relatively new lounges would soon be decommissioned.

I had been told by the CEO that there was a master plan for the airport, with it being used temporarily by the air force for training flights and by the helicopter service to ship oil workers to offshore rigs. But after this the area will be redeveloped into a residential and commercial zone.

By this time, there was only 40 minutes remaining before the flight would be called. So, although there was a chance to eat lunch, I used the time to change, check emails, write a news story and then go down when the flight was called.

We were bussed from the terminal to a stand only a short distance away. Boarding was completed by 1430 and we pushed back at 1445.

Once onboard, there was the offer of a drink (no alcohol, though). At the seat was a Salvatore Ferragamo wash bag with Attimo pour homme products inside (the same as in Qatar’s standard business class).

There was another bag containing non-slip flight socks, eye mask and ear plugs, as well as a small bottle of still water. There was also a duvet and large pillow.

The aircraft is configured in one cabin, although because of the over-wing exits it naturally splits into two with four rows of 2-2 seating (AC-DF) in rows one to four, and then six rows of 2-2, making a total of 40.

To see some general thoughts on the design, see the previous review here.

I’ve already said that rows one to five contain the best seats, because they are the roomies. Having flown over in row five, this time I chose seat 1A so I could experience the front cabin, having flown in the rear cabin on the way over.

You can see the whole of row one in these photos. My seat is the one with the laptop bag on it. A clear advantage of sitting this far forward is that it’s possible to get a good view out of the window for take-off and landing (see the images directly below).

A disadvantage of the front cabin is that there is only one washroom at the front, compared to two at the rear of the aircraft, and the one at the front is much smaller than the two at the back.

So, if you are intending to change, or like room, then you either have to walk back or choose a seat in that rear cabin.

That said, I think the front cabin is also preferable because it is quieter, being in front of the engines rather than over the wing or behind the engines.

And, although I thought the overhead locker space was going to be restricted with all the blankets and duvets stored within, a member of the six-strong cabin crew offered to move them immediately so I could put my two bags overhead for take-off. The St Regis, Doha, and Intercontinental (to the left).

I should also say that I was told on this flight that I should not store by bag under the ottoman footstool for take-off, which was different from the advice given on take-off from London Heathrow.

I’m not sure which is correct, but if that’s the way it is then you need room in the overhead lockers. Jackets in this cabin are hung in a wardrobe at the front.

There was a very swift and smooth take-off, perhaps aided by the fact that this is a quiet time at the airport.

I paid more attention to the menu on this day flight. I was hungry, and the choice was extensive.

There were various dishes by celebrity chefs, including Tom Aikens, Nobu Matsuhisa, Ramzi Choueiri and Vineet Bhatia, with their names after the dishes they had prepared.

The menu was as follows

I had the Ramzi selection and the Vinnet curry. I’m ashamed to say that I was so hungry I forgot to take photos of the food until I started eating it, apart from this one (Vineet Bhatia curry). Every item, even down to the cheese, was different than on the journey out, and that this was carried over to the wines, where apart from the Champagnes and the 1974 Tawny Port, there was a completely different selection.

After eating, I put the seat flat for about an hour and dozed, but didn’t want to sleep for too long and so worked the rest of the time (please see the previous review about the seat for sleeping).

The inflight mobile worked for a short while at the beginning of the flight, but for the middle period (at least three hours) did not work, and in fact I had several texts unsent when we had to turn our phones off ready for landing.

I was told the system, once it has been turned on by the CSD, is automatic, so when there was coverage the icon of the phone with a red cross through it (ie: no coverage) would no longer be illuminated and we would again be able to use our devices.

I had the flight map on, which had a wide choice of views, but had incorrect information on it for the whole flight (it showed us landing at 1846, an hour and a half early). Afternoon tea was fine, but a little uninspiring. The options were as follows:

It was now 1800 UK time and with landing at 2000 I was really more in the mood for an evening meal than scones and some very small sandwiches.

I think part of it was that being a day flight, and wanting to stay awake, you’re aware of it being a reasonably long flight (over seven hours), especially on a narrow body, no matter the lovely comfortable seat, spaciousness etc. Anyway, like they say, a first world problem.

We circled Heathrow for about 20 minutes, and had a couple of turbulent moments despite the clear skies, and a brief lurch to one side, but then landed without problems 20 minutes early.

Immigration was swift, at least for European passport holders, and the bags appeared a couple of minutes later from the carousel.

Another very good flight, and with superb service. I believe that the food on Business One is going to be upgraded closer to what will be served in the new First class on the A380 (certainly in terms of presentation, at least). At the moment, it is, although excellent, the same as you get on the regular B777-300ER service in business class.

That brings us to comparing this with the five other Qatar Airways services on the London to Doha route.

Of course, aviation fans with the budget will want to try this service, but for regulars, one point to bear in mind is that the flight is slightly longer on the A319 than the wide-bodied fleet. This isn’t an issue on the night flight when you want to rest, but for the day flight you may want the flight to be as short as possible. 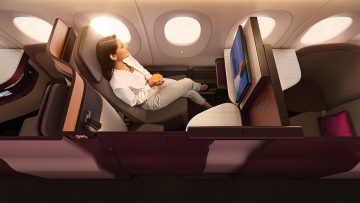 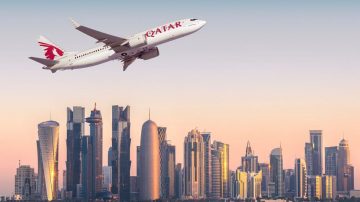