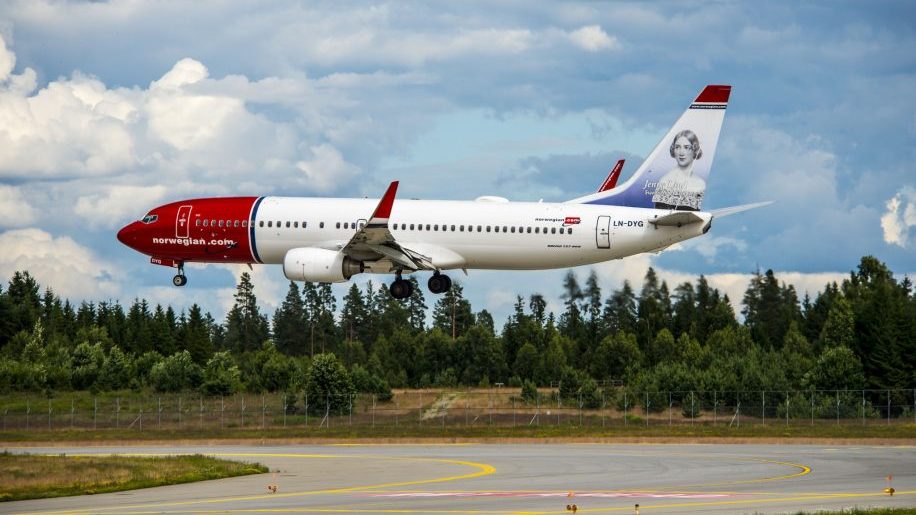 Launched in 1993, Norwegian offers five daily flights from London Gatwick to Stockholm (one flight only on Saturdays). In addition to short-haul flights throughout Europe, it flies long-haul from London Gatwick to eight destinations including Boston, New York and Las Vegas with its fleet of Dreamliners. (It began long-haul services in 2013.) It has a fleet of 113 aircraft (B737s and B787s only).

I checked in online the day before my flight using the Norwegian iPhone app, saving my mobile boarding pass to Apple Wallet.

Passengers booked on Low Fare economy class tickets need to pay £7-£16 to reserve a seat or £25 return on international flights, otherwise they will automatically be assigned one for free. Extra legroom seats come at no extra charge – they are simply first come, first served.

For those wanting to check luggage in, it costs an extra £15 to upgrade to a Lowfare+ ticket that includes it on the London-Stockholm route. It also includes seat reservation. Flex tickets include seat reservation, checked baggage and fast-track.

Low Fare and Lowfare+ tickets can add fast-track for £9 up to 30 minutes before departure.

I arrived at London Gatwick’s South Terminal at 0730, with just over 90 minutes until the departure of my 0910 flight to Stockholm. As I was travelling with hand-luggage only, I went straight upstairs to security – it was busy but well organised, and there were plenty of stations to pack up liquids in free plastic bags.

I used my mobile boarding pass on my Apple Watch to let me through the electronic gates to the screening area, and joined one of the fast-moving queues. (Laptops and tablets needed to come out.) One of my bags needed to be checked manually and liquids tested, but I was in the airside departures zone by 0800.

I got some breakfast at Apostrophe and then headed to my gate (11) when it appeared on screens at 0830. (It was a six-minute walk away.) There was a queue of about 20 people ahead of me waiting to have their passports checked and boarding passes scanned but it moved quickly.

Once in the waiting area at 0845 I took a seat, but it wasn’t long until everyone was called for boarding. Passengers in the front half of the plane were directed to board via the airbridge, while everyone else had to go downstairs and access the aircraft via the back of the plane.

This B737-800 has 31 rows, with 14 and 15 by the emergency exits in the middle. Seats are arranged 3-3 (A-B-C, D-E-F). I was in my seat, 3A, by 0855. There were a few crumbs on 3C, the back of my seat had milk splashes on and the product looked a little worn. Seats are upholstered in black leather with red headrest covers and generous seat-back pockets. A young couple sat next to me with their baby, who kept trying to press the keys on my laptop but they moved him to the aisle seat and this solved the problem. He fell asleep after that. The tray tables are of a decent size for working on a laptop, and are very stable.

Sit nearer the front for speedy boarding and disembarkation – rows one and two offer the most legroom. Aisle seats mean you can get up and move around without disturbing others. A-B-C seats start from row one, while D-E-F seats start from row two. Both offer extra legroom and are behind bulkheads so if you do choose to sit in A-B-C you won’t have to worry about people stepping on your toes as they board. However, aisle seats are annoying as people bump you with their bags as they go past.

The captain came on at 0915 to say the last bags were still being loaded so there would be a bit of a delay to departure. Overhead screens played a safety demo at 0920, and we finally pushed back at 0940, half an hour late. There were half a dozen planes lining up to take-off ahead of us so there was another delay as we waited for a slot.

We were airborne by 0955. Once cruising, crew handed out menus at 1005 (duty-free was also listed in the pamphlet). As on other low-cost carriers, food and drink must be paid for – here are some of the items listed:

I didn’t order anything but crew seemed friendly and efficient.

A real bonus with Norwegian is its free wifi with no password. It was quick and easy to logon on both via my laptop and phone, and emails downloaded within a few seconds. It took just under a minute to upload a photo to Instagram, which was pretty good. iMessages sent in about ten seconds.

The airline’s homepage offers free TV shows sponsored by RiksTV (none of them looked very interesting) and Live TV for watching during the flight. Bloomberg Television provides news seamlessly. (First I had to update my Adobe Flash Player, which worked.) Another handy feature was the moving flight map on the homepage and time until landing.

It’s a real bonus to have free wifi, making this a productive flight for business people needing to stay connected. Norwegian is setting the trend in terms of providing this for passengers and not charging for it. The onboard product wasn’t anything special (as you’d expect from short-haul economy) and the flight was late taking off, but I was impressed passengers didn’t have to pay for cabin baggage and could take an additional small bag (unlike Easyjet).

Internet rates for a return economy flight from London to Stockholm started from £65 (Low Fare ticket).