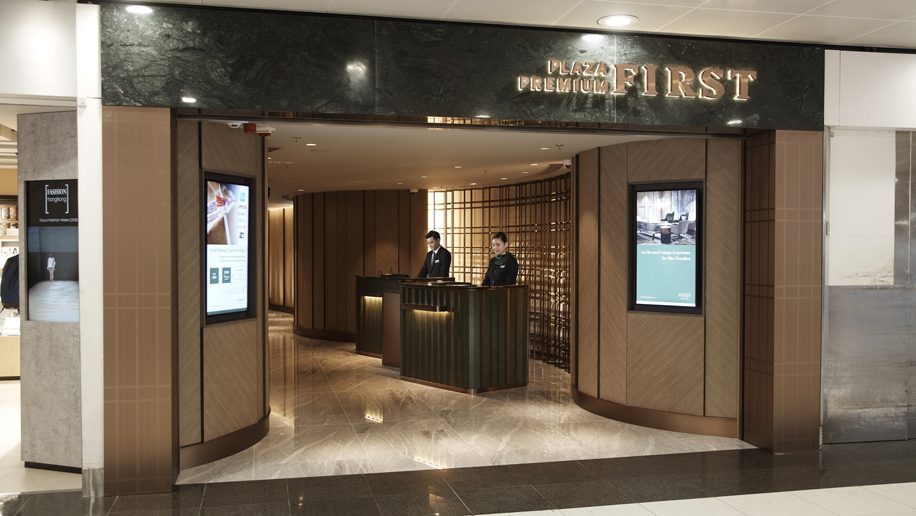 Plaza Premium is probably the best-known lounge operator in the world, with over 150 lounges and plans for expansion. It is opening its first US lounge later this year (or at the beginning of 2019) in Denver, and as anyone who has ever travelled in the US can testify, there’s definitely a market for decent independent airport lounges there. It is also opening one in Helsinki.

As it expands, it has added a new brand – Plaza Premium First – with two so far, one in KLIA and one here in Hong Kong. It aims for, as they put it, “An elevated lounge experience for elite travellers”, and as such you won’t get in with your Priority Pass card without paying a supplement – HK$200 at the moment for a 3-hour stay, which is a bargain when you consider what you get for that (see below).

I was keen to try it because of a recommendation from a Business Traveller reader who had paid the supplement and thought the money well spent, despite his being a breakfast visit and so not one where he could take advantage of the extensive premium drinks selection, of which more later. 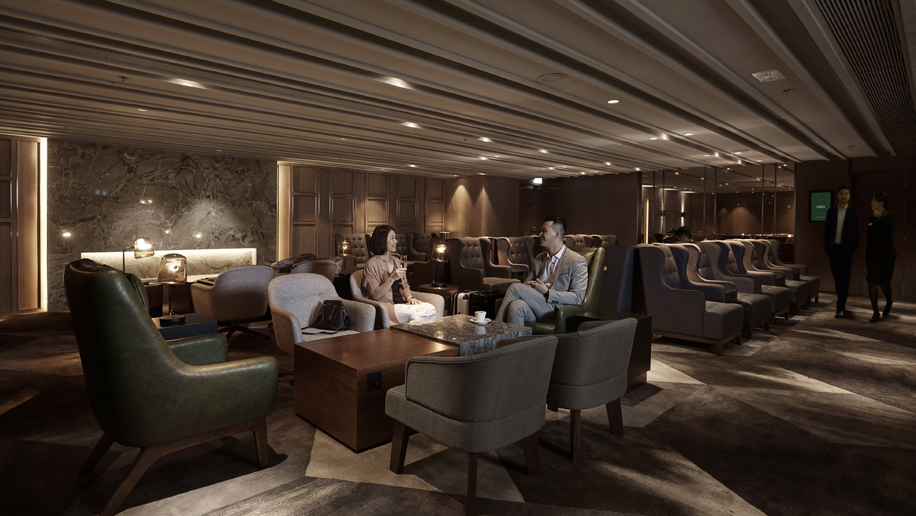 By Gate 1 at Hong Kong International Airport. The entrance is close to the main entrance for the Plaza Premium lounge, but it’s deliberately a different experience, with the burgundy colours of the standard lounge replaced by green touches, and an ambassador taking you into the lounge and pointing out all of the features of the lounge, which is good, because there are several different areas.

The price of admission also includes a massage, and since these get booked up it’s a good idea to get your name down early. Even then it will probably be a couple of hours before you get a treatment. You are given one of those circular paging lights which notifies when it’s time for you to go to the treatment room. 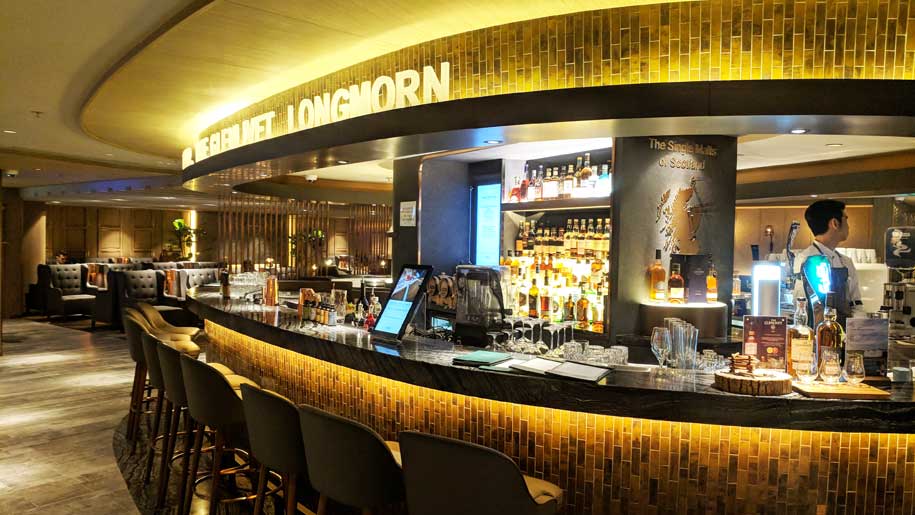 On the way in you walk past the bar, and are offered a chilled non-alcoholic drink made of tea (there are two choices).

The lounge wasn’t very busy, even though this was a Friday night. I had earlier walked past the entrance to the ‘standard’ Premium Plaza Lounge and the queue to get in had been snaking out of the door. This is partly because the lounge by gate 1 is the first one people get to having passed through security, but it’s also because you can get in by presenting various lounge access cards (or just pay).

Standing by the bar of the Plaza Premium First there were various premium brand partnerships in evidence, with Lavazza coffee, for instance, TWG for tea, and Glenfiddich. 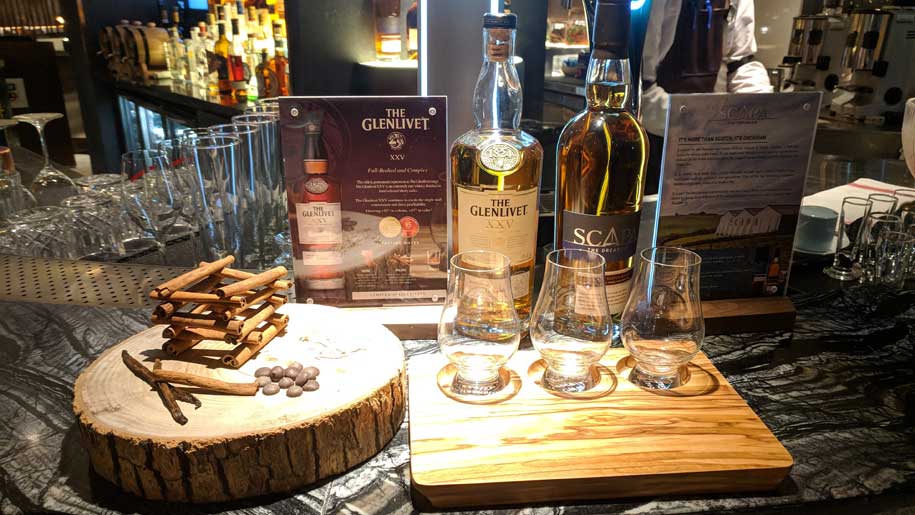 There is also a counter here with lots of lovely looking desserts – small cakes, macaroons, that sort of thing. I bravely ignored this and went through to explore with my guide, who showed me that there are several areas to sit, and also some lounging chairs if you really want to relax, though I always worry about falling fast asleep and missing my flight in those.

I didn’t want to take photos that had other people in them, but if you look at our story on when the lounge opened there are some pictures in that one.

We then went through to the restaurant where the various dining options were explained, which include a la carte, buffet, hot and cold. 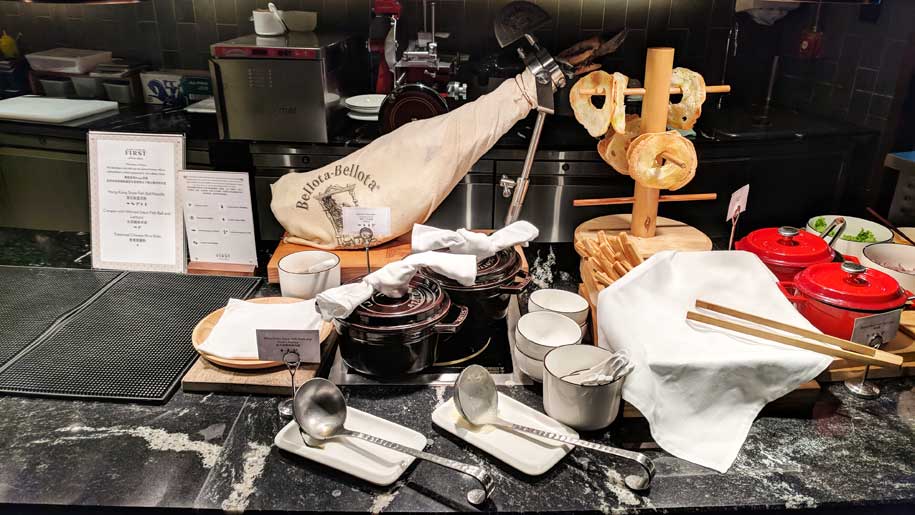 I started off with the buffet with salads.

There is also a Mexican wrap option which is prepared for you once you choose your fillings including a sort of fake beef or pulled pork.

I tried this and it was delicious, and also, in the interests of the review, also some Iberico ham (see above), since I’d been given a voucher when I first arrived. 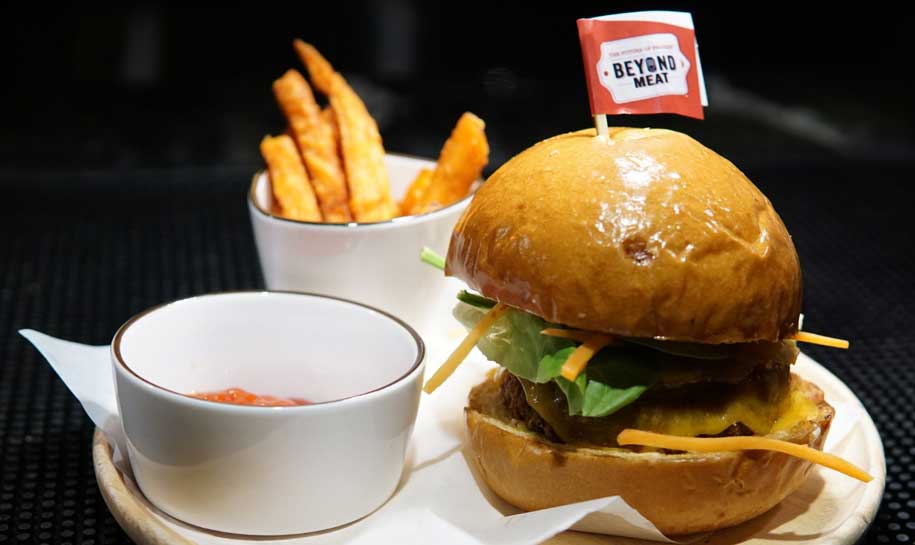 I then had the vegetarian burger. This was very tasty, and I’m not sure I would have known it wasn’t meat if it hadn’t been labelled as vegetarian.

The drinks menu included some good wines and also Champagne. 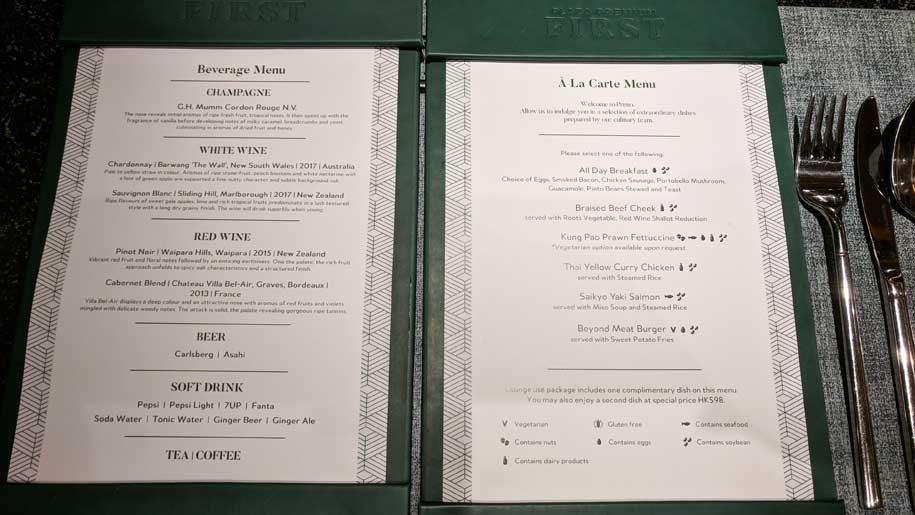 After eating I went through to the sitting area and worked, keeping powered up via one of the plentiful powerpoints.

This seating area is similar to what was here before when this was the ‘old’ standard lounge.

But the new chairs, carpets and better lighting have made all the difference, and it manages to be both calm and stylish without being dark and depressing. If I had one criticism, it was that the music is on a 10 minute loop, and is very repetitive. I put on my headphones to get away from it.

There are extensive drinks options, but many of these require further purchase, as you can see from the menu below. 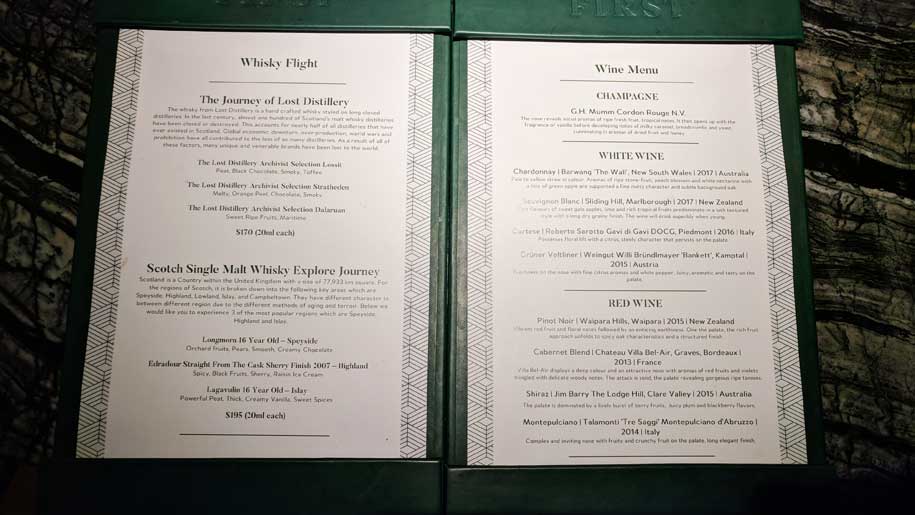 There was also a kind of book where lots of other gins and whiskies and rums and so on were listed, but again, these were for further payment. I suppose if you have the money and want to drink expensive spirits it’s nice to have a place to do it. I hope one day to reach that stage in life.

At one end of the lounge, beyond the restaurant, is the Infinity Room, which is a sort of VIP area. You can pay to rent this out for a private function or meeting, I believe. 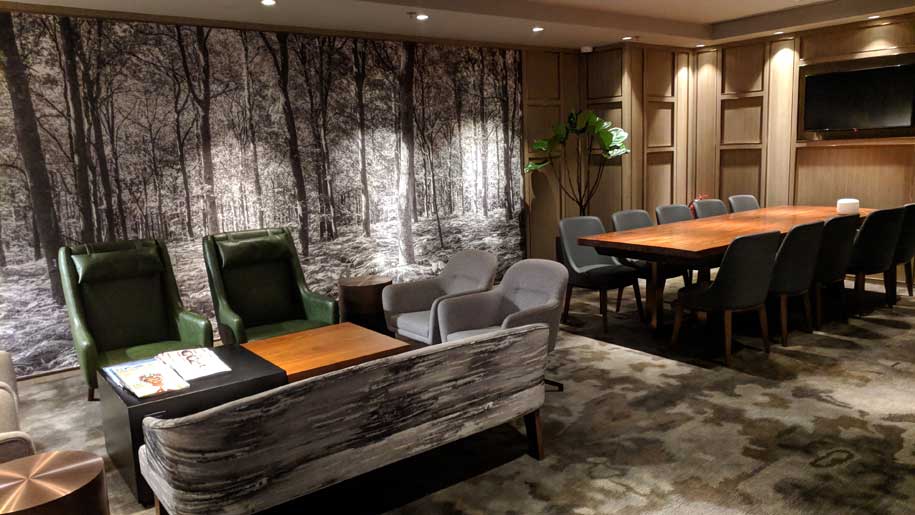 This is an excellent lounge, and if you have Priority Pass and are spending a few hours at the airport, I would recommend upgrading to this lounge. If you are flying Finnair or JAL,  you will also use this lounge (if in business class).

Full details of all the pricing is available on the website 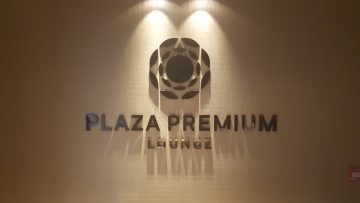