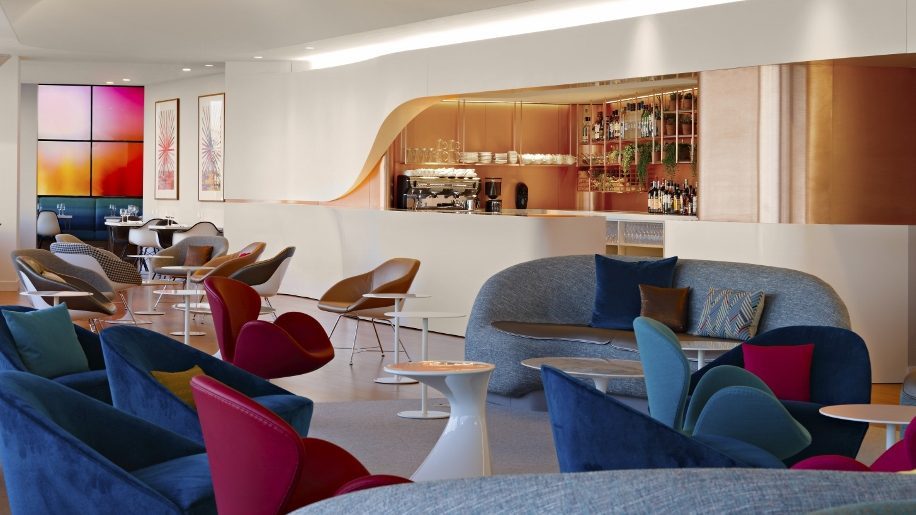 First impressions We arrived at JFK at 1630 for the 1830 departure on VS4. Virgin’s check-in area for Upper Class is at Row 7. We already had boarding passes, so went down one level, walked past a lot of shops, went through security, and then headed to Gate A4 where the new lounge is located.

The lounge This is the new US$7 million Clubhouse designed by Slade Architecture along with the Virgin Atlantic’s in-house design team. It’s a large area of 10,000 square feet, more than double the space of the existing Clubhouse, as already covered on businesstraveller.com here.

The reception area echoes the new Upper Class bar on board the A330 (for a review of Virgin’s new Upper Class seat and cabin click here), with its oblique angle allowing you to catch a glimpse not only of the bar beyond but also the dining area. There’s also a giant door which is swung shut when the Club House is closed – a lot more stylish than pulling down the shutters.

Luke Miles, head of design, says he aimed to have a space which keeps revealing itself as you explore, and I think he’s succeeded there. There are funky seats set into one end wall, an internet area (big Apple computers, of course), and a light tunnel on the way to the toilets and showers.

The Clubhouse is large, but it’s split into several different areas, with the floor rising and falling between them and ceiling height varying with some strange modern sculptures. The bar is very different from the old one at JFK – now there are just a few armchairs and the bar staff are below you – perhaps this might discourage too many passengers from occupying this area, because it did used to get crowded round the bar in the old lounge.

The “…cloud shaped cocktail bar is enclosed by a diaphanous, curving ‘wall’ of stainless steel rods and walnut fins”. When you first walk in it seems very odd, but you quickly get used to it, and the jumble of furniture which actually works well together.

Staying with the bar (and many do), Virgin says it is a “sultry, uptown cocktail bar where resident mixologists … prepare well-constructed signature cocktails and mix the classics using the world’s best tasting vodka and New York’s finest microbrewery ales.”

I’m getting on a bit, so I found a corner to work in overlooking one apron (the dining area overlooks the other side), plugged in, and got on with my work in a comfortable lounging leather chair with footrest.

I’d only been there a minute before a member of staff appeared, took one look at the laptop and offered the password for the free wifi, then asked if I would like something to eat from the very extensive menu, and perhaps something to drink?

It was a very impressive start, and was continued throughout a too short stay (too short for trying a spa treatment in the New York City based salon and product company Bumble and Bumble spa – also with Dr Hauschka Skin Care). There is one treatment room, but three chairs in the salon, and one of our party was straight in for a haircut. The menu (click here to see it) is available throughout the lounge, whether in the brasserie dining area or simply watching the large flatscreen TV (though I imagine they wouldn’t want you eating if you were playing pool there). The food was delicious, and I ate a lot because I wanted to get on with sleeping on the flight back. There’s a full kitchen here, and the staff aren’t just preparing and warming the food but also cooking it.

The raised floor means you get a great view down onto the apron, including seeing the aircraft we were due to fly out on. These include Virgin America aircraft as some of its domestic aircraft connect through Terminal 4, so those flying first class with that airline, or elite members of the Virgin Flying Club loyalty programme can use the lounge as well.

I was quoted a maximum capacity in the lounge of 250 to 300, but when I was there the numbers were less than 100 and there was plenty of space for everyone to stretch out.

Verdict This is a simply excellent lounge – the design is great and the service attentive but informally friendly – core Virgin values. Highly recommended.