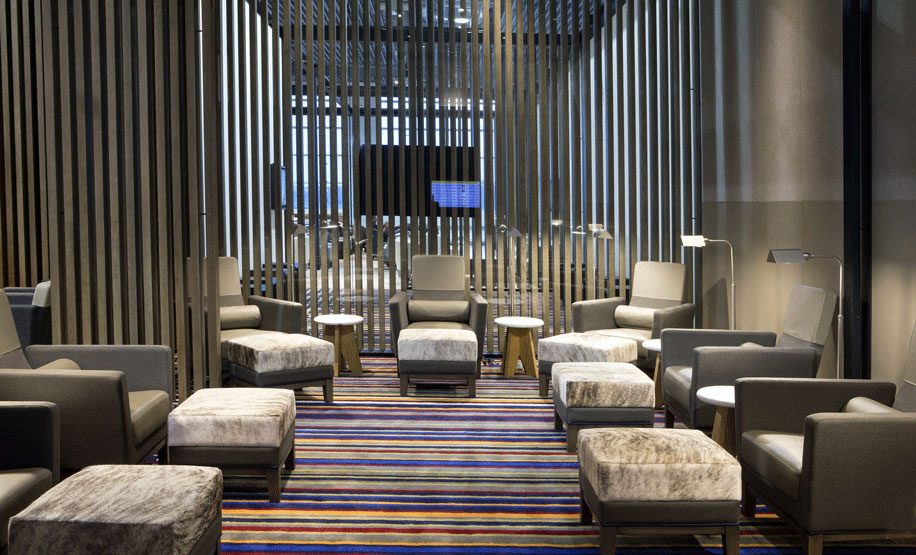 This lounge was LATAM Airlines Group’s first VIP Lounge and opened in 2014. Located on the mezzanine floor of the departure area of the new Terminal 3 at the Guarulhos International Airport, the 1,800 sqm lounge has a capacity for 450 people and is open daily from 0500 to midnight.

As well as LATAM passengers, it is also used by Oneworld carriers including British Airways. To read more on this, click here.

The lounge is easy to find up an escalator after turning left after security. To see a few photos of Terminal 3, click here. There’s a nice minimalist entrance.

The large lounge is broken up into several areas, and even when busy it’s easy to find a space to relax or work in.

My immediate plan was to get my laptop charged up and get on the wifi. None of my adaptors would work with the three-pronged Brazilian plugs and so I borrowed one from reception, leaving my boarding card behind as surety. Note you also leave this if you want to have a shower, and there is a queuing system for when it gets busy (see below). I then logged onto the wifi (you need a code and also have to put in your passport details, which seems a little overboard).

The design of the space is understated but attractive. You can see lots of photos here.

The space has been designed by Mathias Klotz and Lillian Allen from Chile, with consulting assistance from the Paris-based Studio Putman.

Materials include wood, marble, onyx and leather, though it was the colourful carpets I noticed most, along with the screens which created separate areas but let you peer through. Maybe this is meant to remind you of trees or even the Amazon, but if you’re worried they came from the Amazon it actually is laminated aluminum.

The lounge has six shower rooms and 24 toilets. The busiest time for the lounge is between 2000-2200 and I was told during that time there might be 30 people showering (in turn, not five to a shower). I took a shower at around 1700 with no need for queuing. It was a large cubicle with colourful mosaic tiles, good bath products (Ekos) and plenty of room to get changed, shave, etc.

Other areas in the lounge include the main buffet area which has both hot and cold options. There is some nice teak seating here. The menus change twice a month and also around 1130 between breakfast and all-day dining.

There is Chandon sparkling wine, and two red and two white wine choices, as well as some premium brands in the bar area which has Heineken on draft. Behind the bar area is a hidden away business area with five computer terminals and a printer. The automatic coffee machines for once produce tasty coffee (Suplicy Cafés Especiai).

Note there was talk of Haagen Dazs ice cream being offered, but I was told this was stopped after a couple of days (I don’t know why).

There are many TVs in the lounge, but the extra large one at one end would be good for when there is a big sporting event (it was turned off when I was there). There is also a sleeping area with four beds with blankets, and a quiet area. There is also an Xbox room, though this was in the process of being repaired. Note children are allowed into the lounge.

The lounge is open until the last flight leaves for Santiago (which departs at 0130), closing at 0100. After that there’s a Qatar Airways flight departing at 0245 for Doha, but those passengers use the lounge next door (the airport operates through the night).

I was there for several hours – and I was told the average time in there for those on connecting flights is five hours. I was impressed how the staff kept the buffet replenished and the place tidy, there were at least three attendants just looking after the six showers.
ADMITTANCE

The lounge is open to all customers flying business class with TAM, LAN or Oneworld carriers. The lounge can also be used by holders of TAM Fidelidade Frequent Flyer Black, Vermelho Plus and Vermelho cards and LANPass Comodoro Black, Comodoro and Premium Silver cards, and oneworld’s Emerald or Sapphire frequent flyers. You can also buy admittance at “around $50” I was told.