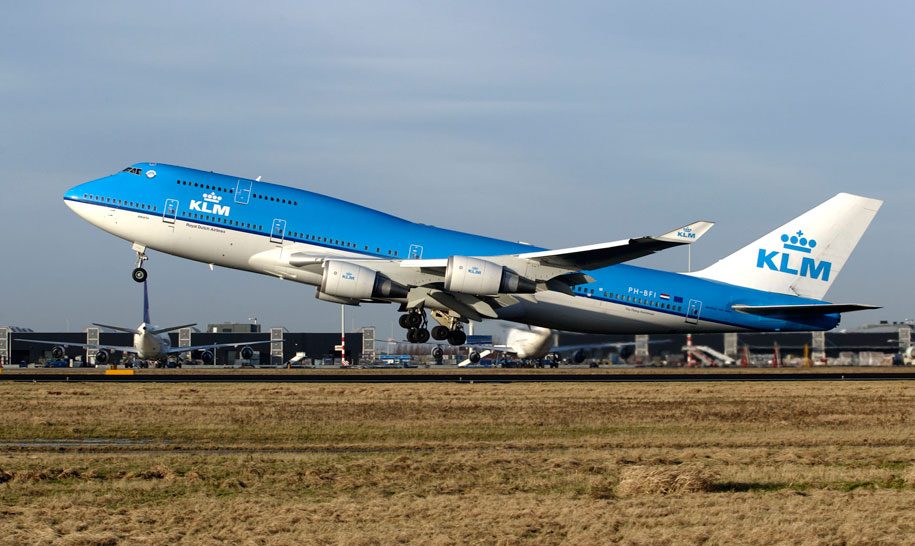 I was connecting onto this KL0889 2120 departure from Amsterdam Schiphol to Hong Kong and so was airside having arrived on an on-time connection from London Heathrow’s Terminal 4. Having nearly two hours to spare, I made my way to the KLM Crown Lounge (international) which is by Gate 52.

This is a huge lounge, with several different areas in an L shape with windows looking out onto the runway and gates below. There are several different drinks stations and some snacks were available here but perhaps because it was getting late on a Sunday evening, the only warm food was soup. Around 2100 a message came up on the screens saying the departure would be delayed until 2230. At this time I weakened and walked out of the lounge and along to McDonalds and had a meal. Ten minutes later when I passed some screens the flight was showing as Last Call, which certainly didn’t do my digestion any good. I walked quickly to the gate where the last passengers were going through. There was a further security check here (laptops out of bags, but belts and shoes stayed on) and then we were onto the aircraft.

World Business Class seating is in the nose of the aircraft in rows 1-3 (AB-JK) and row 4 (AB–EF–JK) taking a total of 18 passengers on the main deck. I was on the upper deck, which is all business and has a staggered arrangement of rows running from 72-73 (AB-JK) then from 74-79, a total of 24 upstairs and 42 World Business Class altogether on this configuration. Downstairs on the main deck there are another 233 economy and economy comfort passengers making a total of 275, very low for a B747-400 but the Combi indicates it has a lot of freight capacity.

I was in 79A, a window seat with the side bins perfect for storing small items, and overhead lockers suitable for a laptop bag. Unless you have the side bins on the upper deck, there isn’t a huge amount of storage space and passengers with wheelie bags stowed them in the wardrobe area towards the back of the cabin at the top of the stairs down to the main deck. On sitting down my jacket was taken, drinks offered (water, orange juice or sparkling wine) and then the captain apologised for the delay which he said was due to a technical difficulty.

The seats have plenty of room and have three preset positions, for take-off and landing, a lounging position and a lie flat one. The seats recline, so the seat in front of you does impinge into your space, and each seat has a sort of clam shell arrangements that can be lifted up to give the sleeper more privacy from the person behind. Each seat had a power socket (though needing a European plug adaptor if you have UK plugs), and reading lights, as well as AVOD IFE system with a good choice of entertainment.

This was a choice of a Chinese meal selected by the South Beauty Group (“This much respected chain of restaurants has more than 20 locations in Beijing, Shanghai, Chengdu and Hong Kong”) or Western created by Margot Janse, the Dutch-chef of the restaurant The Tasting Room in Le Quartier Francais in Franschoek, South Africa. The appetiser of asparagus panna cotta served with smoked salmon and green asparagus, accompanied by a creamy dill sauce. Main courses were a slow cooked fillet of chicken with pomegranate jus, couscous and apricot tajine or Hake and crayfish cake. The Chinese menu was chicken, mushroom and asparagus salad served with yu xiang sauce and a main course of beef yu xiang with spinach, bamboo shoots and steamed rice. I asked for the beef, was told it was pork and then was left feeling doubtful because it seemed to be beef to me, but it was very pleasant. I passed on the desserts because it was getting late but there was a choice of white chocolate and lime cheese cake, passion fruit caramel mousse, a cheese plate with old Amsterdam and Bresse Blue cheese and seasonal fruit.

We were all handed bottles of water before sleeping and then the lights were turned down. The lie-flat bed is reasonably comfortable, though this is definitely one of the ones where if you lie on your back you gradually slip down the seat, and if you lie on your side eventually your knees complain about the slight difference in angle they are being asked to bear as the footrest is rarely completely at the same angle as the main seat. My main problem was that this version of the lie-flat seat does not allow the arms to drop down to be flush with the seat, and so every hour or so I woke with numb arms from either resting my elbows on the hard arm rests or jamming them inside the armrests. Most others seemed to sleep on their back with their arms crossed across their chests.

We were asked to fill in our breakfast choice before going to sleep, which I had done but then fallen asleep before handing it back. The crew were excellent though and served me a choice of chive omelette (savoury) served with rosemary potatoes, mushrooms and grilled tomato or strawberry pancakes (sweet) offered with vanilla sauce and garnished with mini brownies. We had not made up any time before arrival and so were an hour late landing at Chek Lap Kok in Hong Kong.

There’s nothing exciting about KLM’s business class, but the prices make it an attractive alternative for travellers prepared to consider a non-direct flight to and from UK and Asia, and the service is good.