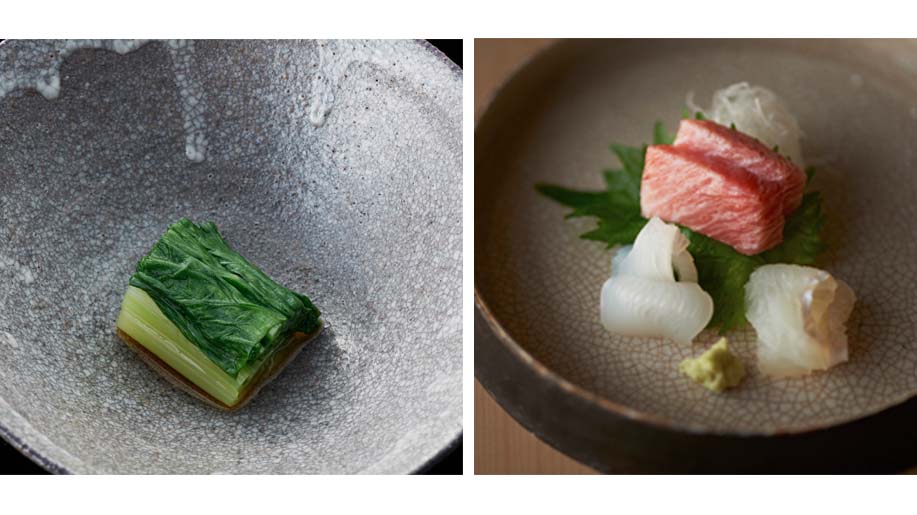 This eight-seater restaurant at the Mandarin Oriental, Tokyo prides itself on being a traditional Edomae style sushi house. Edo is the former name of Tokyo and this type of sushi uses freshwater fish from Tokyo Bay such as tuna, sea eel, halibut and shellfish. Headed by Chef Yuji Imaizumi, the restaurant offers an intimate dining experience with the freshest ingredients that are sourced daily from Tokyo’s most famous fish bazaar – Tsujiki Market and its network of fishermen in Hokkaido, Okinawa, Osaka and Tokyo Bay.

On the 38th floor of Mandarin Oriental, Tokyo in Nihonbasi – an area that was considered as the heart of former Tokyo or Edo.

Designed as a traditional sushi bar, the restaurant is an intimate space that seats only eight diners at one time – making a reservation is absolutely essential. Dimly lit with a few plants placed behind the chef’s station, the ceiling-high windows overlook an expansive view of Tokyo’s cityscape including Tokyo Skytree at a distance.

Sushi SORA’s menu is influenced by the seasons of Japan as that affects the number of fish caught. In summer, around 30 fish and in winter around 40 fish (including shellfish) are available. We arrived at 1pm and were seated at the communal table. Lunch began with Senkin Yuki Daruma (Snowman) nigori that is a cloudy in appearance, unfiltered and unpasteurised sake. This is creamier and sweeter than a regular sake. There are five different kinds of menus you can pick from that differ in terms of the number of sushi and nigiri served. We were trying the “Izumi” menu that means spring in Japanese – but the chef used his discretion too. The first appetiser of blanched vegetables served as a palate cleanser for me, before the fish arrived. The chef explained that this and the next dish were snacks before the sushi and sashimi experience began. Next up was white radish soaked in miso paste and Japanese mandarin shavings. The three types of sashimi were plated beautifully with edible flowers. The plate included thin slices of blue fin tuna, yellowtail and barracuda – the latter was seaweed flavoured. I didn’t feel the need to additionally add any soy sauce to the sashimi that was fresh, succulent and almost melted in my mouth. Up next was the blue fin tuna sushi that was soaked in soy sauce overnight. In the midst of our sushi experience were conversations with our chef who explained that the restaurant doesn’t believe in imports, but in attempting to bring its guests fresh fish every day. I quite enjoyed the meaty texture of the Japanese sea-bass and the luscious taste of yellowtail soaked in soy sauce that were brought to us us later. Japanese Spanish mackerel marinated in rice vinegar and sea eel drenched in water, sugar and sake was offered as well. To conclude the sushi and sashimi meal was a miso soup with tofu and seaweed that was quite comforting in Tokyo’s cold weather. An interesting dessert completed my experience at Sushi SORA – a plate of finely plated mandarin, yogurt, cinnamon, salty jelly and mandarin sauce.

As for drinks, from sparkling sake, an extensive wine list, an array of Japanese sake, shochu (a type of Japanese spirit made of sweet potato), and beer to Japanese craft gin, the beverage list at Sushi SORA is incredible.

A premium yet traditional Japanese dining experience for aficionados of the cuisine. 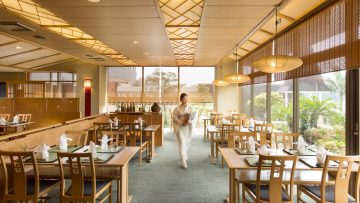