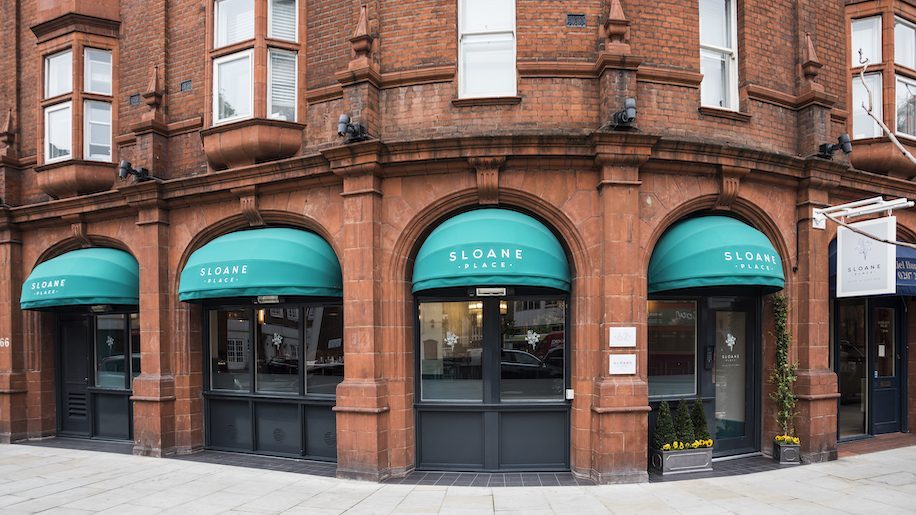 Opened in April 2019, this boutique hotel is a new enterprise by the company that owns the adjoining members’ club, the Sloane Club. A members’ club has been present here in one guise or another since the Second World War. First was the Service Women’s Club and later, in the early sixties, The Helena Club, established by a lady-in-waiting to Princess Marie Louise, granddaughter of Queen Victoria. Men were admitted during the seventies and in 1976 it became The Sloane Club.

In 2017, the club was bought as part of a joint venture by Queensway, the real estate investment company – also behind Point A hotels. Queensway has transformed 27 rooms that were part of the Sloane Club and reallocated them to the hotel, leaving the club with 106 rooms.

The hotel is located on the corner of a large five-storey Victorian red-brick development in the Pont Street Dutch style, which, according to art historian Nicholas Pevsner is distinguished by, “tall sparingly decorated red brick mansions for very wealthy occupants, in the semi-Dutch, semi-Queen Anne manner”.

It’s certainly a formidable building, but its grandeur is moderated by the green awnings bearing the hotel name on the ground floor windows, which ensure things are less austere and more inviting.

Once through the entrance, a few steps lead up to the restaurant/café. There isn’t a reception area as such, only a small desk tucked around the corner, and no lobby, just a couple of cushioned low stools where hotel and restaurant guests can wait if there is no one free to check them in/see them to a seat.

That was the case when I arrived, as the member of staff at reception was on the phone and I had to wait for a couple of minutes for someone else to attend to me. I felt slightly in the way and, though the hotel is small, I imagine things could become cramped if several guests arrived at once with lots of luggage, particularly if the café/restaurant was busy.

Guests are encouraged to check in online using a system called Mews to avoid having to fill in forms when they arrive, possibly for this reason but they will still need to be seen by a member of staff to get their key card.

Lower Sloane Street in Chelsea, five minutes’ walk south of Sloane Square, which is served by the District and Circle underground lines. Victoria station is less than 20 minutes on foot and the shops, bars and restaurants of King’s Road are within five minutes’ walk. 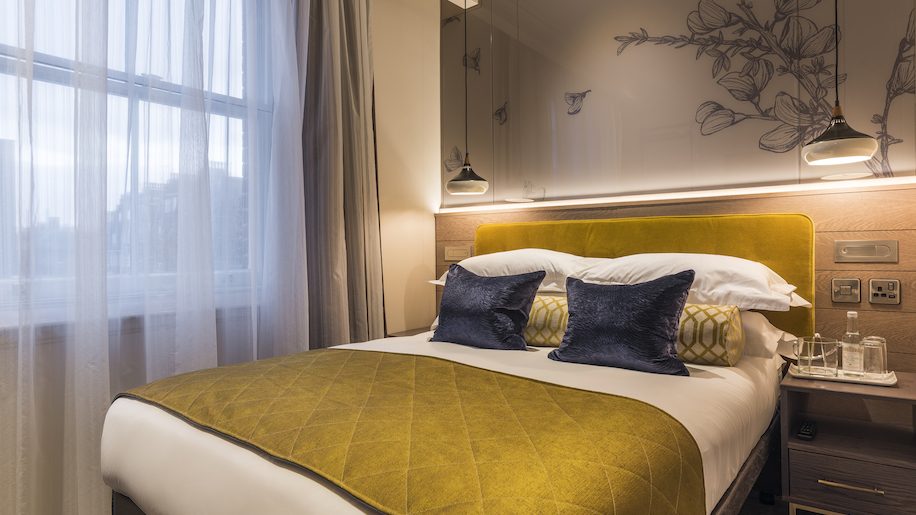 There are 27 rooms in three categories: Cosy (14-17 sqm), Classic (18 sqm) and Suite (38 sqm). All have Hypnos beds (doubles in Cosy and Classic, king in Suites), en-suite bathrooms, wifi, kettles and Nespresso machines, smart TVs and a writing desk (in the case of the Cosy, this is more of a long, narrow ledge) with upholstered chair. Cosy (street-facing) and Classic rooms (courtyard-facing) have hanging space for clothes while Suites feature large built-in wardrobes, alongside several other pieces of furniture such as a chest of drawers and sideboard.

Rooms sport a uniform of warm neutrals on plush, tactile fabrics and materials, with a cheerful burst of mustard on velvet headboards, bolsters and blankets, and contrasting deep blue on scatter cushions. Thick wool carpets have a large-scale geometric design; together with black metal wall and desk lamps they lend contemporary flair, with a generous use of mirrors enhancing the sense of space and light. The overall effect is smart, stylish and deeply comfortable. To reduce the sounds of the street outside, windows are double-glazed, while thick curtains and blinds help to insulate the rooms further from external noise and light. 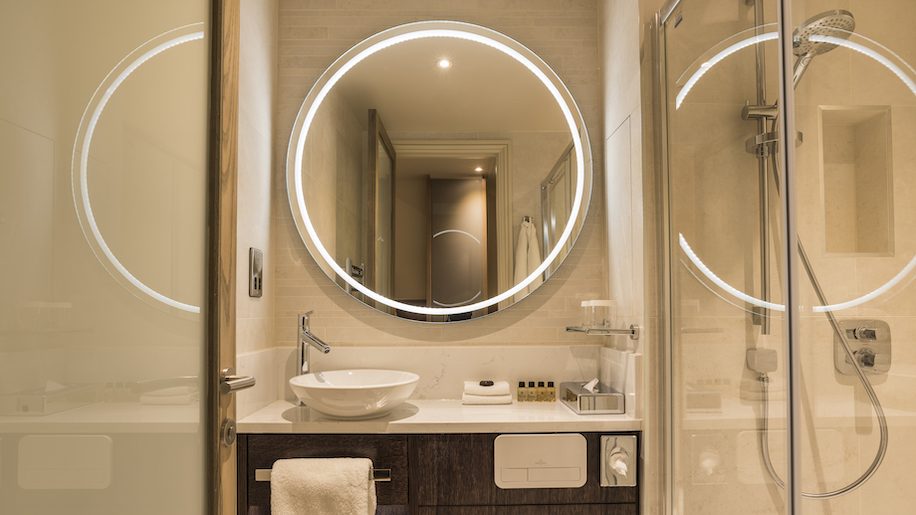 Cosy rooms have walk-in showers, with the added bonus of a bath in the Classic and Suite (located on the fifth floor) categories. Showers are powerful and responsive, with both handheld and waterfall heads. Toiletries are by British company Nobel Isle, which uses locally sourced extracts from around the UK to create British themed fragrances – these were dispensed in plastic miniature bottles (albeit made of recycled materials), which isn’t a particularly environmentally friendly way to provide them. On the plus side there are robes provided in all room categories. 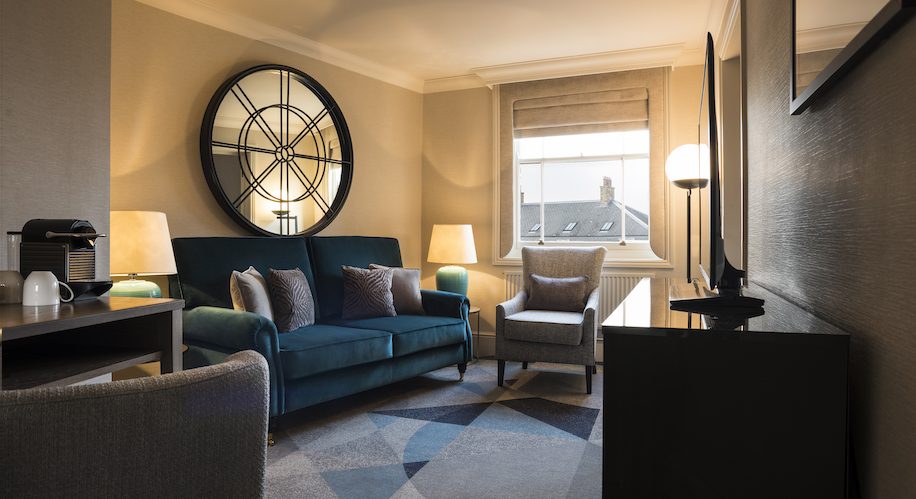 I was in a fifth-floor suite (there are two lifts, but only one goes all the way to the top). The suites have a living room with a second smart TV, an elegant teal sofa, an armchair and glass coffee table, plus a hall space. I found it a very comfortable, relaxing space and for the most part peaceful, though the air con was an audible presence in the bedroom. It wasn’t so loud as to be too intrusive, though.

Lighting was well thought out, with a mixture of floor lamps, wall lamps, reading lamps, desk lamps and up-lighting around the headboard allowing guests to create their preferred ambience via a main switch or individual controls. The bathroom had a sensor light beneath the vanity unit, so that I could see where I was going in the night without having to switch all the lights on. In the Suites, there are two basins in the bathroom, so couples can engage in synchronised toothbrushing.

A notable absence was a fridge or a minibar for guests who might like to make use of the living space with an evening nightcap (me). However, the bar is open to midnight, after which room service is available from then until 6am. 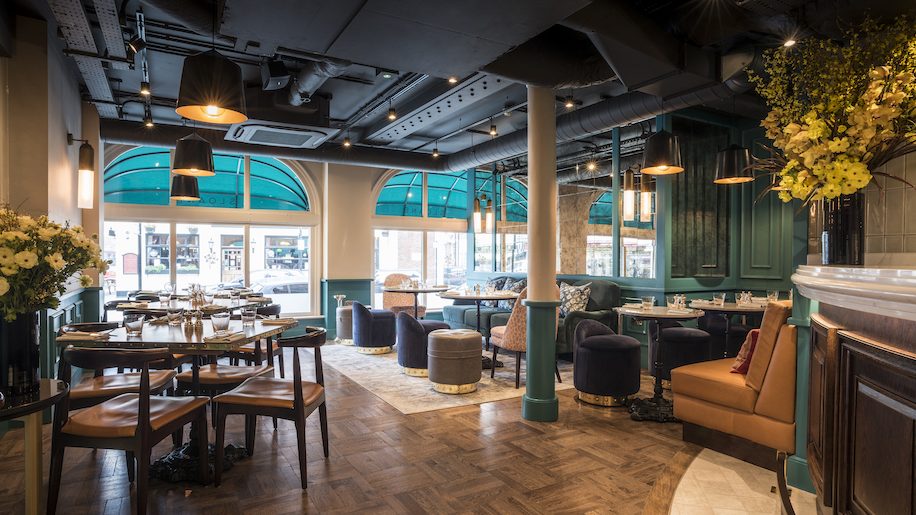 The café-bar is on the ground floor and is very much a venue in its own right rather than an addendum to the hotel. Large windows flood the space with light and provide a view onto the comings and goings of Chelsea’s inhabitants, including a lesser-spotted old-school boozer across the road. The décor is lovely. An eclectic combination of industrial style exposed fixtures and fittings on the ceiling, rich wood floors, turquoise accents and seating of all sorts, including wooden tables and chairs, leather banquettes and plush cushioned options. It feels fresh, light and relaxed yet elegant.

The chef is Bernard Mayer, formerly of the Savoy and Four Seasons. Food is served throughout the day – the concept is it is open for everything, whether breakfast, a quick coffee, evening meal or a quick drink. As such there is a no bookings policy and the hotel hopes that locals will be as drawn to the place as guests.

The menu offers a mix of modern British and pan-Asian cuisine in categories of small plates, raw, fish, meat and vegetarian/vegan. The health-conscious need not fear; vegetables and fish are a prominent feature. My dining companion and I opt for seabass ceviche which comes with toasted corn, crispy squid with black garlic aioli, pan roasted monkfish kebab and beef fillet tataki with truffle dressing and lotus root – a wonderful combination of flavours. Prices range from £6.50 for the squid to £29 for the monkfish kebab, which while expensive is also perfectly cooked. In fact, everything is exceptionally well executed with clear, true flavours allowed to sing. I feel cleansed by eating. It’s a very enjoyable meal, but my experience is slightly soured by some of the prices – £18 for a burger is steep, especially as fries cost extra. But this is Chelsea and the setting is convivial – I wonder whether the expected clientele will blanch at this as I do.

A further restaurant/bar is due to open towards the end of May, and this will have a moodier ambience.

Breakfast is also available with prices ranging from £7 for two eggs on sourdough to £16 for a full English.

There is no meeting space within the hotel itself. However, the neighbouring members’ club has several space available for private hire by non-members.

There is a spa offering treatments only, with no pool, sauna or steam room. There is a roof terrace that is open to guests (with blankets provided). Plans are afoot to build a bar up there.

Elegant, comfortable and relaxed, this is a stylish option in a great location in Chelsea. Rooms are adequately equipped for those travelling on business who may need to work, but some corporate travellers may find the lack of communal space isn’t to their taste. The food in the restaurant is for the most part very good, a fact reflected in some of the prices. 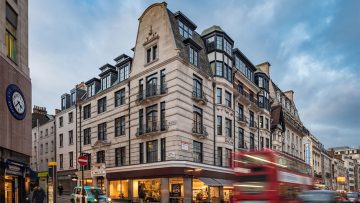 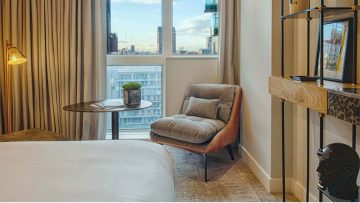