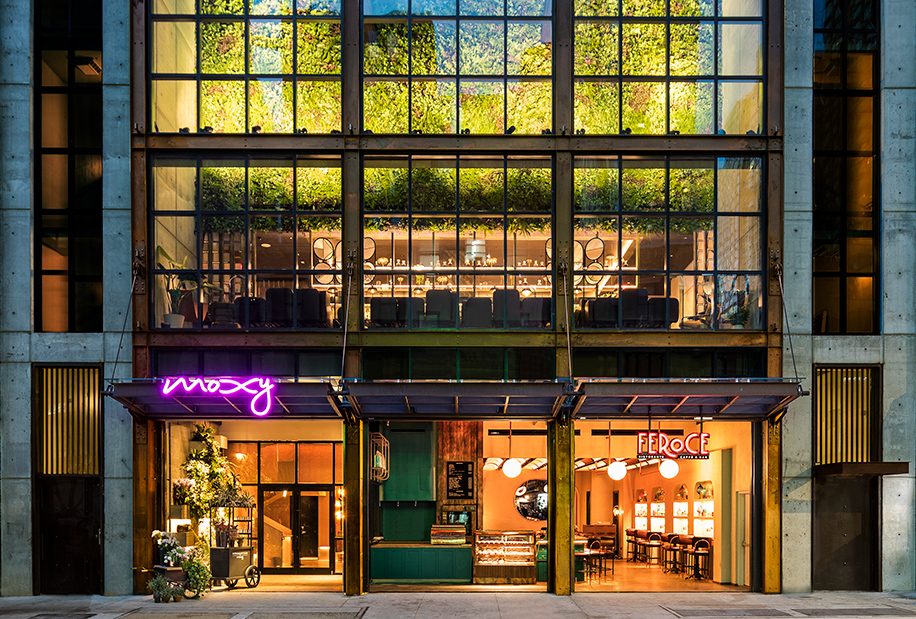 Marriott International introduced its Moxy Hotels brand in 2014. There are now nearly 100 open, with many more in the pipeline including the Moxy Williamsburg and the Moxy Lower East Side. This property opened in February 2019 and there are more coming in the area. To see a previous review, see:

In Chelsea, close to the corner of 6th Avenue and West 28th Street. You can walk to Penn Station in around five minutes and from there take the train to JFK. In fact, unless you have lots of luggage you’d be well advised to since it’s nearly always quicker than getting a cab.

As with many New York hotels, the only way of appreciating the size of the hotel is by crossing the street and looking up, from where you can see all 35 storeys of this thin slice of a building (see the video we shot, below).

It’s fairly anonymous when viewed from a distance, but it has an impressive frontage and a lobby of ‘urban jungle’ with “botanically-inspired design combined with Italian romance”.

This is the Flower District, so it makes sense, and the lobby hosts a florist called Starbright Floral Design. I also noticed that during the day the opposite side of the street was lined with plants for sale as well, so it’s a real contrast with the very urban streets around the hotel, many of which, judging by the closed shops, are struggling to recover from the pandemic.

The design team of Yabu Pushelberg and Rockwell Group is the same as that of the Moxy Times Square and having both dined and stayed at that hotel on previous visits to New York, the rooms at this Chelsea property are immediately recognisable, though the public areas have a style of their own. In a nod to the foliage-strewn streets of the Flower Market, “the architecture juxtaposes an industrial façade with a glass atrium revealing vertical gardens within”.

The welcome at the hotel was excellent – professional, yet personable, and we were quickly checked-in.

A sculptural, wood-cast concrete staircase leads from the check-in area to the upper floors and I used that a few times when I couldn’t face waiting for the lift / elevator again. There is a digital art installation on the ceiling with messages like “Good Morning, Stranger”. 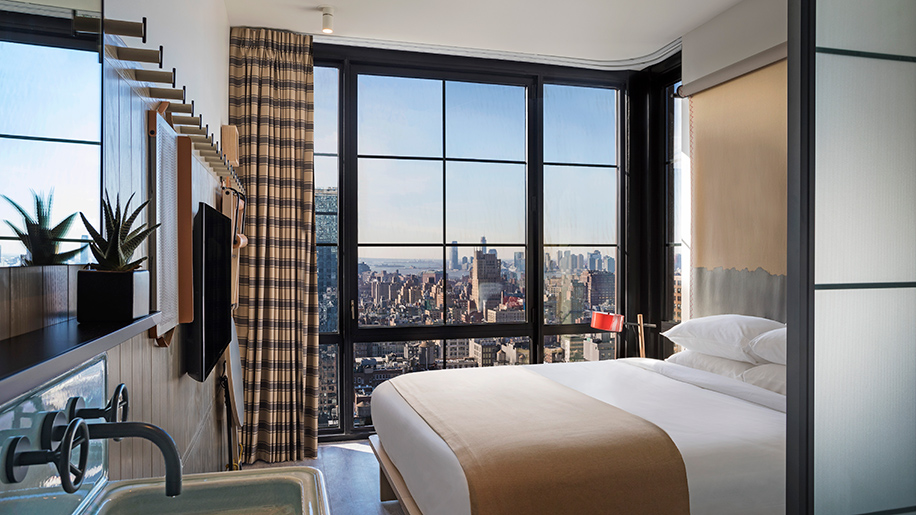 There are hangers along the wall opposite the bed (rather than wardrobes), storage space under the bed (including the laptop-sized safe) and the narrow washbasin in the corridor as you enter the room opposite the separate toilet and good-sized shower. There were a couple of small bottles of water for sale on the basin ($5 each), but if you have a refillable bottle (and you should have!) there is a place to fill it in the basement fitness centre.

The dispensers for toiletries in the shower are on the wall, good for the environment, if difficult to extract anything from, but there is no separate bin for recycling.

There’s a full length mirror by the door, the bed is very comfortable, and there is a small work desk which folds down from the wall and a collapsible chair (when you arrive it is hanging on the wall – I thought it was the luggage rack at first). I don’t think you’d want to work at the table sitting on that chair for long, and if I had done so I would have required medical help to leave the room, but the table is a good place to store and charge things, and there are also charging points all around the room including both USB docks and US main sockets on both sides of the double bed.

There are limited number of room types with standard rooms being on floors 4-21 and then those with a city view being on 22-32. Note that one side of the building faces towards the Empire State Building, and so you want (if available) to have one of those on one of the higher floors, though there aren’t many of them.

There are 226 King rooms (17.7 sqm), and then a further five of these are King View; Double rooms are 18 sqm and there are 95 of these, with just a further five Double Views. Some rooms allow for four to stay – these are called a Quad Bunk and there are 17 of these. Then there is the Mondo Suite which is 70 sqm without bedrooms (when you would use it as an event space), or can be used with one or two adjoining King bedrooms.

The best rooms are higher up the building and on one side these have outstanding views of the Empire State Building. In fact, this view is one of the best I have ever experienced in over 50 visits to New York. Yes, you can stay south of Central Park, but the price for that view would be four times as much.

I spent a lot of time taking pictures of the view, not least when a praying mantis came to visit and watch me through the window. I wasted an hour or so videoing it, but to be fair, it seemed just as interested in me. It was also fun watching it climb up and down the Empire State Building, though instead of Godzilla it was more like the insect in the Edgar Allen Poe story, The Sphinx (interestingly written at a time of contagion – cholera – and set just north of New Rok in a house overlooking the Hudson.) 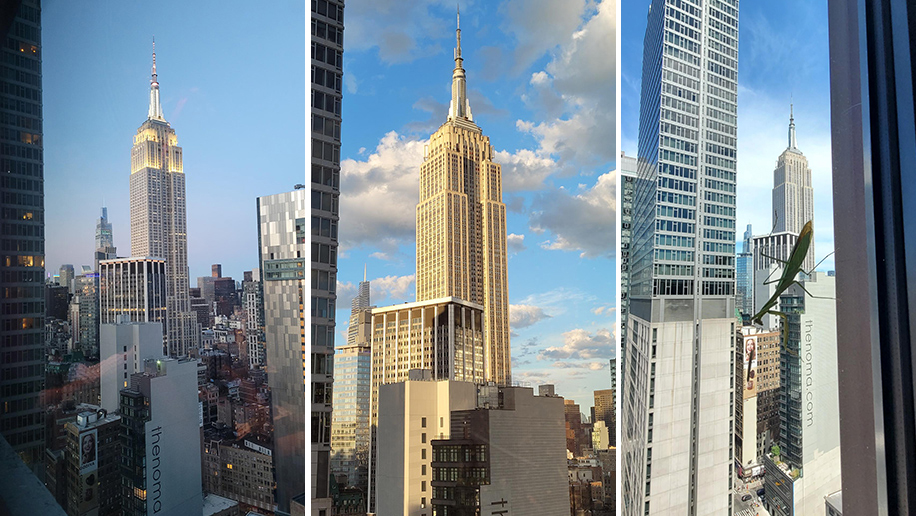 Next to the lobby is the Café d’Avignon Popup at Feroce Caffe, which has a selection of coffees, teas and pastries as well as, when we were there, a small choice of (paid-for) breakfast items. The (actual) Feroce Caffe was closed at the time of our stay (because of the pandemic) but will open in September serving Italian cuisine.

On the second floor there is, during the day, a sort of combined bar area and work space, including Bar Feroce and The Secret Garden, an Italian snack bar and lounge, a co-working lounge; a conservatory looking out onto the street behind the hotel (West 29th Street); and meeting rooms.

On the top (35th) floor is The Fleur Room, a glass-enclosed rooftop lounge with superb 360-degree views that stretch from the Statue of Liberty to the Empire State Building. This is open every evening from 5pm until, at the weekend at least, 4am, and can get quite wild from what I’m told.

I left at around 8pm but you can see from the video above what it was like while still light. When I returned to the hotel having dined out in a Korean restaurant nearby, the queue for the elevator to go to the club was even longer than when we left. I don’t know whether the noise affects the rooms just beneath this, but the main effect is that the lifts can get quite slow in the evening as partygoers are using two of the four lifts to access this top floor bar. 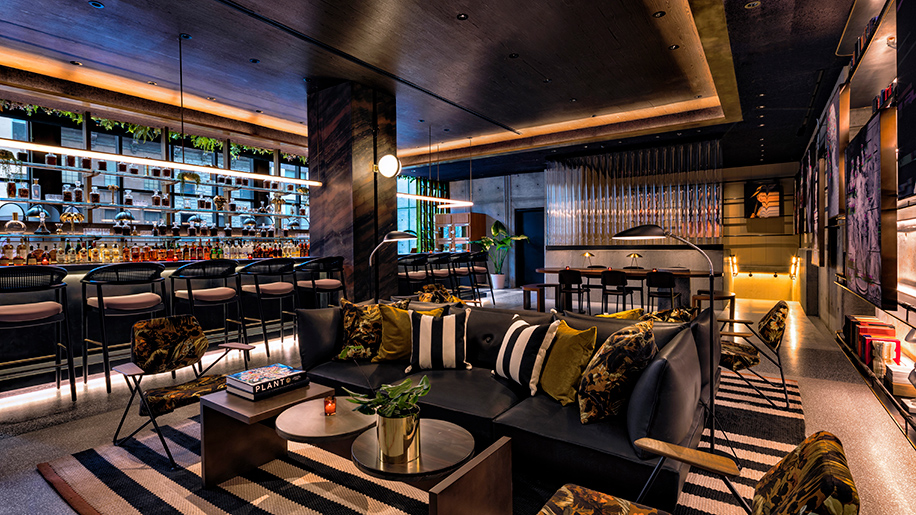 The hotel’s various spaces can be used for meetings, including the meeting studios on the second-floor with two studios able to be combined to accommodate larger groups. The Feroce Ristorante (when it reopens) has a private dining room seating 14 and the restaurant is available for a full buy-out; the Mondo Suite on the 32nd floor is designed for entertaining, with a wet bar, full kitchen/pantry, 18-foot ceilings, and industrial loft-style windows overlooking the Empire State Building.

Finally the Fleur Room on the top floor is  available for private events and has a full bar, kitchen, DJ booth, vintage disco ball, and a retractable window wall to create an alfresco sky veranda. 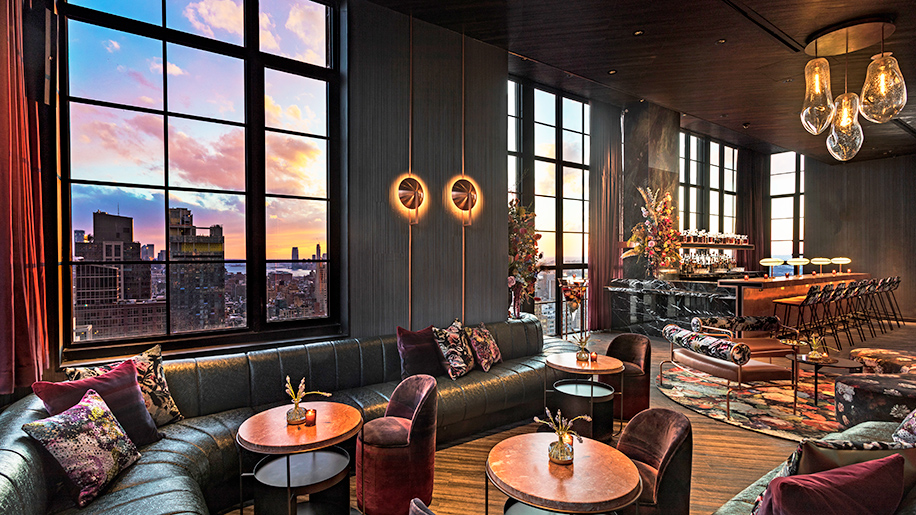 There is a large and well equipped fitness centre in the basement, and it has a water dispenser where you can refill your bottle for the day rather than buying the expensive water in the room. 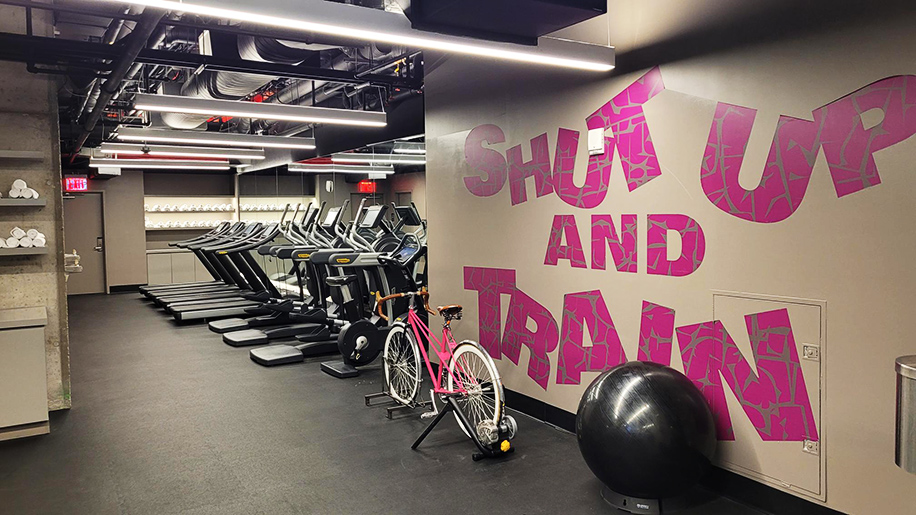 This is a lovely, stylish and well-priced hotel (not cheap, though). As with most hotels in New York the prices fluctuate and can be very expensive. I had trouble finding it for less than $650 in October, but move forward to next February and it’s around $320 (including taxes, which include a $30 amenity fee – probably for using the fitness centre). If you want to splash out, what makes it special is the view from just a select number of rooms – that and the rooftop bar and nightclub.

The views of the Empire State Building – worth paying extra for 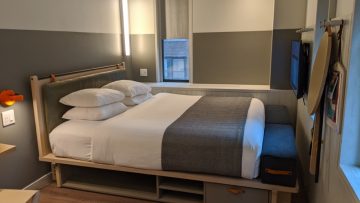 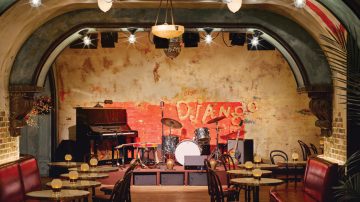 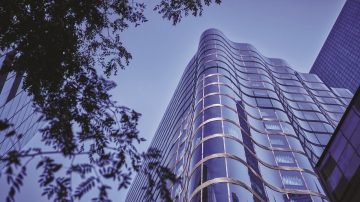 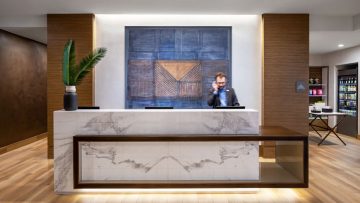