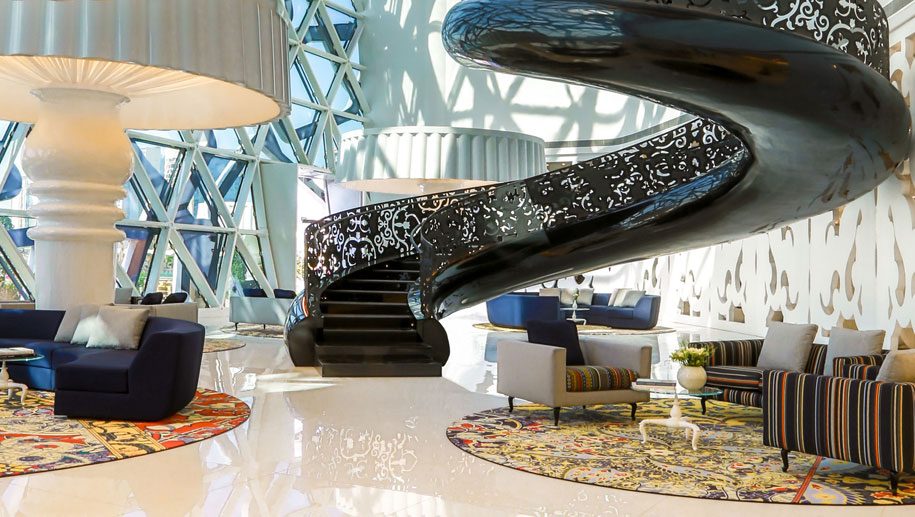 Open since October 2017, the Mondrian is a SBE Hotel, a company which runs 25 hotels including the Mondrian, St. Martin’s Lane and the Sanderson in London, as well as hotel brands including SLS, Hyde and the Redbury in the US.

Accorhotels bought 50 per cent of the group in July 2018 and so will soon be offering the hotels through its global website and allowing members of Le Club loyalty programme to earn and redeem points.

Both the exterior and the interior of this hotel (designed in collaboration with Dutch designer Marcel Wanders), is striking. From the outside it looks like an Arabian falcon, the national bird of Qatar, and inside this is echoed in everything from paintings and portraits to falcon headpieces and ornaments. The hotel has been designed to be a destination both for the local community as well as international travellers, and the striking lobby and high profile restaurants seemed to have succeeded in this.

The lobby atrium has giant columns with golden eggs, a ‘tree of life’ comprised of flowers, falcon video art, a giant shisha, patterned carpets, stained glass, mosaic tiling and a spiral staircase which leads up four storeys to – nowhere. People walk up it, take a photo and then walk back down. It’s clever, but it also is risky, almost serving as a symbol of a hotel with fabulous design but perhaps slightly lacking a heart. We visited during Ramadan, which is a difficult time to judge a hotel which prides itself on its bar, restaurants and nightclub, all of which were closed. I would love to return when it is as buzzing as I was assured it is the rest of the year.

Lusail City next to Lagoona Mall in the West Bay area. It takes around 30 minutes to the airport if in light traffic.

The 270 rooms are in five categories including penthouse suites, studio suites, one and two bedroom suites and a range of standard guestrooms – all of which share the universal design details of Swarovski crystal chandeliers and sumptuous bespoke furniture in hues to mirror the desert.

My Sky House suite was huge (687 sqm) and very white – almost like the scene at the end of 2001: a Space Odyssey. Air conditioning was so fierce that I turned it off while in the room and yet it never really became uncomfortably warm, despite the temperature outside (it was late May).  All the rooms are large – the entry level Standard rooms are 48 sqm and have furniture by Marcel Wanders, iPod docking station by the  bed, US/UK/EUR power sockets, free standing bath, separate rainfall shower and Ciel Bath Amenities.

The hotel has an outlet of Wolfgang Puck’s CUT and Morimoto Doha from Japanese Chef Masaharu Morimoto. I ate in the Walima restaurant (modern Middle Eastern cuisine) which has an extensive menu and was delicious. The Cut restaurant was where breakfast was served in the morning but being Ramadan was only a la carte and with the main kitchen shut proved difficult with staff struggling (it took three attempts to get a coffee that was hot).

On the ground floor, the Moonstone ballroom  (2,000 sqm) lies behind carved wooden entrance doors. During Ramadan this is used every night for Ifta (breaking of the fast) dinners but it’s a space popular for weddings with a gold-coloured lift linking the room directly with the bridal (Opal) suite, allowing the guest of honour to make an unforgettable entrance. It’s also used for corporate events, and as well as all the latest technology has crystal chandeliers and ornate ceiling domes.

The hotel has a rooftop pool and skybar on the 26th and 27th floors has a stained-glass dome in the  pattern of a Peony Tiffany Lamp to be printed on the skylight glass. There’s a small terrace here with good views out over this new area of Doha. The 1,950 sqm spa is so large I got lost in it twice – once going in and once going out, but in between had a very relaxing late evening treatment and then used the steam room – strange when the temperature outside was so high but still very refreshing. It is the largest spa in the region and the first ESPA facility in Qatar and has twelve treatment rooms, a heat experience garden and a traditional Turkish Hammam. There is also a nightclub, rooftop pool and skybar, and an exclusive spa.

This is a stunning hotel, and I would love to return when all the facilities are open. Make sure to check out the view from the skybar.

Internet rates start at £160 for a Standard room, mid week in October. 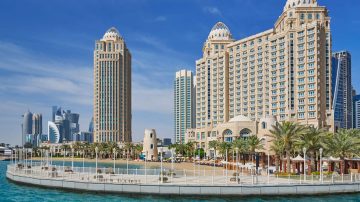 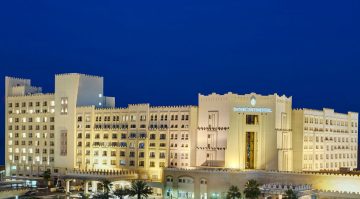 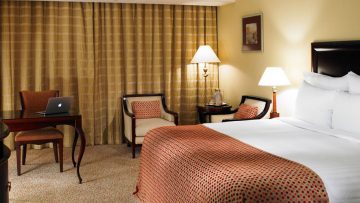