Immortalised in F Scott Fitzgerald’s novel Tender is the Night and frequented by stars and statesmen, the Hotel du Cap-Eden-Roc has long been one of the most luxurious addresses on the Cote d’Azur. It opened as a hotel in 1889, although its grand main building turns 150 this year. The 2020 season, due to begin this month, has been delayed.

It is a member of the Germany-based Oetker Collection, which includes properties such as the Lanesborough in London, Le Bristol in Paris and Eden Rock in St Barths.

Overlooking the Mediterranean on the southern tip of the Cap d’Antibes, half an hour’s drive from Nice airport and 20 minutes from Cannes. The town of Antibes is a ten-minute drive away.

Corny as it may sound, you do feel a bit like a film star from the moment you pull off Boulevard J F Kennedy into the hotel’s driveway. That feeling is amplified when you descend its curving grand staircase dressed for dinner, or lounge around its legendary pool, blasted out of basalt rock back in 1914. If you have the means then this is a place where you come to live your best life.

It’s about understated luxury here rather than screaming opulence, though. Helped from my car by a typically good-looking, charming member of staff, I was welcomed warmly into the lobby lounge of the main château, an airy, timeless space in shades of cream and pale blue that keep the focus on the glittering sea views beyond.

A revolving door at the far end leads down, via imposing stone steps, to the 179-metre Grande Allée – the property’s “boulevard to the sea”, flanked either side by fragrant palms and pines. Here you’ll find the Eden-Roc Pavilion, originally built in 1914 and home to more guestrooms, most of the food and drink venues and event space, plus the pool.

Turn left here, meandering through more of the property’s nine hectares of pine forest and gardens, and scattered along the seafront are 33 private cabanas (pictured below) should you be in search of solitude.

There are 118 rooms and suites, 67 of them located in the main building, accessed via a 110-year-old glass lift, and the rest split across the Eden-Roc Pavilion and the Les Deux Fontaines building, the latter added in 1980 and facing the main entrance. There are also two three-bedroom villas set in the grounds, with a third villa under development.

Entry-level Tradition rooms (pictured below) are 25 sqm and have courtyard views. These are followed by Classic ones, also 25 sqm and overlooking the gardens; Superior, about 32 sqm and located in the original building with garden views; and Deluxe, about 40 sqm and in the main building, with sea views.

Suite categories range from 45 sqm Junior suites (pictured below), some of which have terraces, to the 100 sqm Eden-Roc suite, located at the top of the Eden-Roc Pavilion and offering spectacular views of the Lérins Islands and the Mediterranean Sea from its large teak terrace.

Restful and elegant in design, the rooms hark back to a bygone age, with floral prints, varying pastel colour schemes and antique furniture pieces. My room, located on the first floor of the main building and with high ceilings and lovely sea views through shuttered windows, had a summery, classic feel, featuring shades of tangerine and cream with touches of gold.

All rooms have free wifi, Nespresso machines, large Samsung TVs, desks with EU plugs, and safes. Bathrooms have both tubs and walk-in showers, plus Bamford toiletries in generously sized bottles.

Aside from the elegant Bar Bellini, located off the lobby lounge and with an outdoor terrace overlooking the Grande Allée, the hotel’s restaurants and bars are housed in the Eden-Roc Pavilion to take advantage of the prime Mediterranean views.

There’s the fine-dining Eden-Roc Restaurant for lunch, which, new for 2020, will transform into Louroc restaurant for dinner, and the more relaxed Eden-Roc Grill. Boasting glorious terraces at the sea’s edge, they are being redesigned for this season, with “a new dimension [being added] to the gastronomic experience”.

Eric Frechon – who has three Michelin stars at Oetker’s Le Bristol Paris – has been brought in as chef consultant to “breathe new life into the gourmet menu”, working alongside executive chef Arnaud Pöette, a mainstay of the property since 1983, and new chef Sébastien Broda, who was formerly head chef at the Grand Hotel Cannes and earned a Michelin star at Le Jarrier in Biot, north of Antibes.

Whatever the food concept soon to be revealed, I hope they will find room to keep some of the Restaurant’s house classics, such as steak Diane, flambeed with cognac at your table, and Mediterranean sea bass roasted with basil.

A bountiful breakfast is served in the Restaurant, or you can also take breakfast in Bar Bellini and its terrace overlooking the Grande Allée.

For drinks, there’s the open-air Champagne Lounge (below), situated on top on the Pavilion and open in high season – it was closed when I visited but I imagine it would be a fabulous place to enjoy some fizz as the sun sets over the Med. Also being redesigned is Bar La Rotonde, which adjoins the Restaurant and comes complete with a pianist.

This would certainly be a spectacular place to hold an event. Most of the property’s meeting and party venues are located in the Eden-Roc Pavilion, offering panoramic views – to arrive in style, there’s a private pontoon for direct access to the Pavilion from the water.

The 259 sqm Iles de Lérins ballroom divides into three and holds 200 guests for a banquet or 220 for cocktails. Neutrally decorated, it has floor-to-ceiling views and opens on to an expansive 266 sqm terrace that holds 150 for dinner or 200 for drinks.

The 295 sqm Eden-Roc Restaurant and terrace (below) can accommodate 200 people for a banquet, and pre-dinner drinks could be held in the piano bar. Eden-Roc Grill can host private dinners for 50 to 100 guests and cocktails for 200. The 150 sqm Champagne Lounge can host cocktail receptions for 100 guests and overlooks the pool.

Cocktail parties can be held on the Grande Allée, while smaller gatherings for 50 people can be held in and around the private cabanas.

The whole property can also be booked for exclusive hire, and as part of this, drinks receptions for up to 450 revellers can be held around the 700 sqm pool deck.

Cut into the cliff, the heated seawater infinity pool and its deck are the place to head for lazy laps and lounging. There’s a trapeze suspended over the water if you’re feeling more daring, and direct access to the sea if you want a more bracing swim. Service around the pool, as throughout the property, is thoughtful and unobtrusive.

The Spa Eden-Roc by La Prairie is tucked away in the pretty rose garden to the left of the Grande Allée and has four treatment rooms, a sauna, a steam room and an experience shower. Treatments can also be provided in two garden gazebos or in one of the cabanas. There’s also a gym with Technogym kit, a hair and beauty salon, and five clay tennis courts, with coaching available.

A sensational property both for a decadent retreat or a truly memorable event. You won’t want to leave. 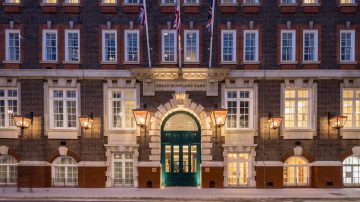 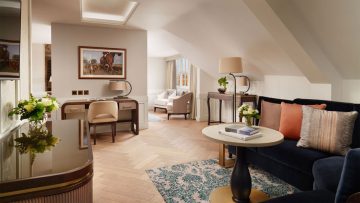 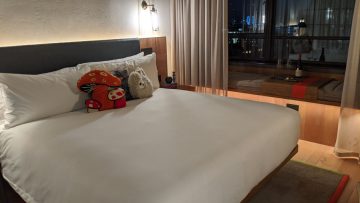 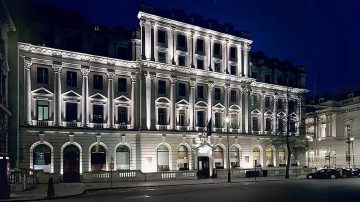