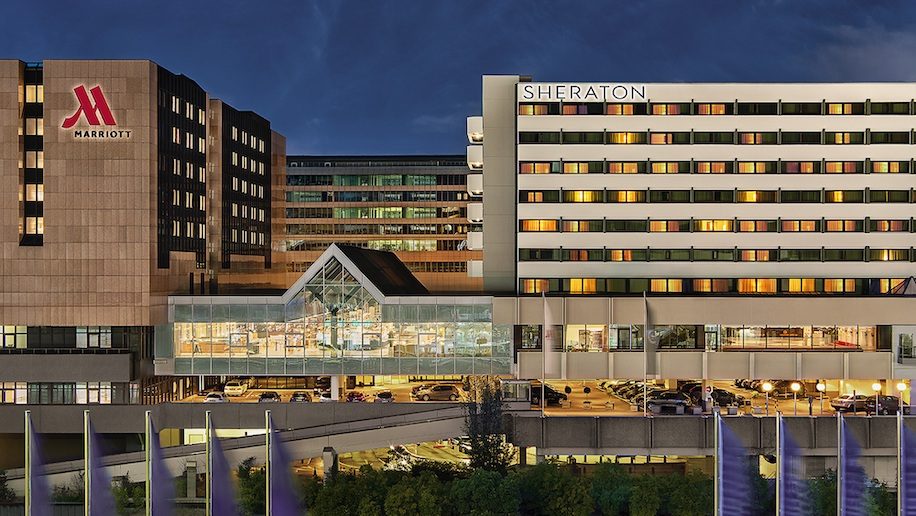 It is the first dual-brand property combining the Marriott and Sheraton brands in Europe. While the Marriott property is relatively new, the Sheraton dates back to 1975 and has undergone various renovations and expansions over the years. Note that at the time of writing (winter 2022), there are ongoing renovations across the two hotels.

The property has 1,012 rooms and suites over nine floors, split into 779 rooms at the Sheraton and 233 at the Marriott. Each hotel has its own lobby, reception area and club lounge. The aim is to offer two experiences under one roof, with Marriott targeting individual guests while the larger Sheraton is more focused on the MICE and corporate space.

It is directly connected to Terminal 1 of Frankfurt airport via a covered walkway. The free Skytrain, which departs every 2-3 minutes and operates from 5am-11pm, offers access to Terminal 2 within a few minutes.

There are also free shuttle buses which stop outside the hotel every 10-15 minutes.

The property is also connected to the AIRail ICE long-distance train station, and a 20-minute drive from the city centre. 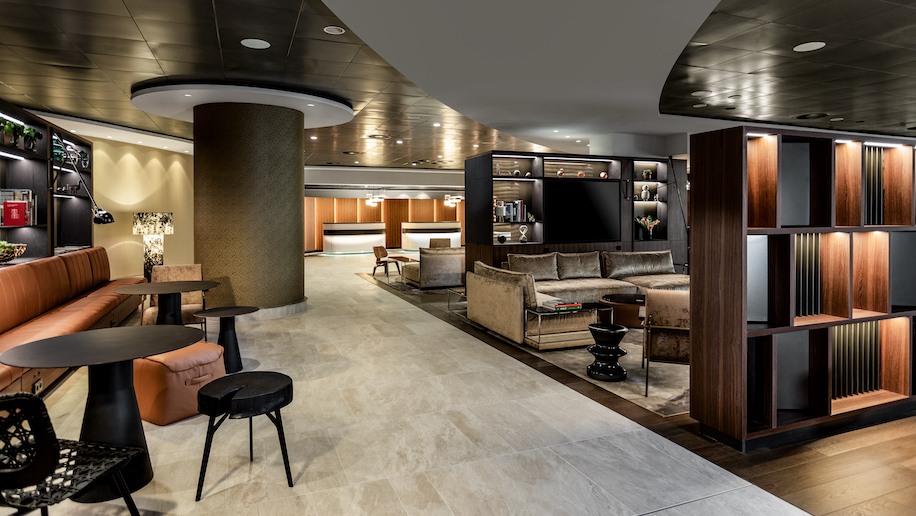 As you enter the automatic doors from the walkway, you come to a circular space which forks for the Marriott and Sheraton check-in areas. The layout of both properties is characterised by interconnected public spaces, so you don’t feel excluded from one of the hotels if your room is located within the other.

The reception at the Marriott hotel has various check-in desks and friendly staff, and on the right is the Disruptive Bar – a spacious lounge-like area with comfortable seating areas.

Bridging the two nine-storey properties is a beautiful and bright atrium, which is flooded with natural light thanks to a triangular skylight and floor-to-ceiling windows overlooking Terminal 1 opposite.

This space is home to The Eatery Kitchen and Bar, a gathering place designed by London-based B3 Designers. It features an Art Deco-style brass and turquoise-tiled bar at its centre which immediately reminded me of Searcys Champagne bar in St Pancras. 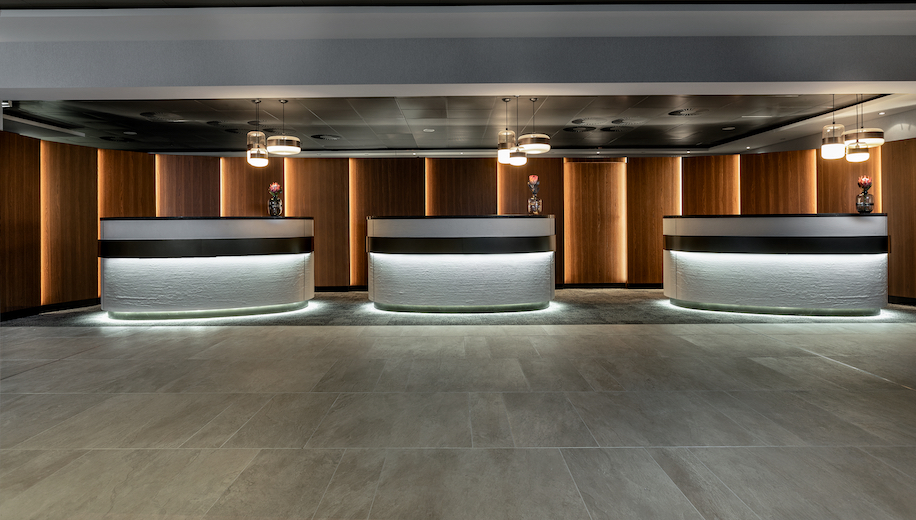 New York-style small lamps and dark green furnishings create a sophisticated look and there are various seating areas designed for both transit customers and in-house guests – from the white quartz counter to plush armchairs and a more casual lounge-like area at the back of the room with a large TV. The entire space seats 240 and there are power sockets throughout.

The atrium is set to become more buzzy in the future once it has direct airport access. The forthcoming second platform of the Skytrain, which connects Terminal 1 with T2 and the forthcoming T3, will be connected to The Eatery space with a walkway protruding from the large windows.

The Eatery is not branded for this reason, hoping to attract people that might not normally visit a hotel dining venue because of preconceptions regarding cost and dress code.

Beyond this is the Sheraton property which has a large open-plan space leading up to a smart marble reception, a separate check-in desk for crew and a window-facing Community Table space (Sheraton’s co-working feature) with built-in wireless mobile charging and views of planes taking off to feed your procrastination. 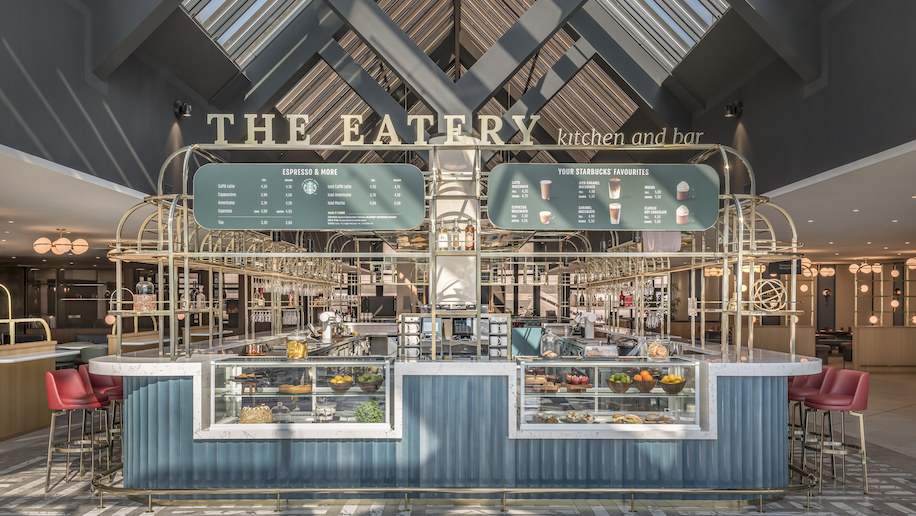 Marriott rooms come in three categories: Deluxe (27-29 sqm), Executive (27-29 sqm, including M Club access and located on the higher floors of the hotel), and Family (47 sqm with a king-bed and two single beds). There are ten accessible rooms in the Deluxe and Executive categories. The hotel also has 18 suites in Club (63 sqm) and Premier (72 sqm) categories, both of which have M Club access.

The rooms in the Marriott hotel have a contemporary and sleek design with hardwood floors and locally inspired typography which provides plenty of character. The latter is inspired by the Frankfurt Book Fair, with themed carpets and walls featuring the word ‘travel’ translated in various languages – a nod to the hotel’s international clientele and airport location.

There are also quotes such as Johann Wolkgang Von Goethe’s “one does not travel in order to arrive but for the sake of travel itself”, should you need to justify your hectic travel schedule. Cushions, meanwhile, depict the Frankfurt cityscape and framed monochrome artworks, which hang off a rail, blend typography with city scenes.

The rooms are very well-designed with a comfortable king-size bed, work desk with an armchair and ottoman on either side, and an L-shaped sofa corner space which can be used for relaxing or getting some work done. Bathrooms are modern with either a walk-in shower or bathtub with shower.

There is also a fixed luggage stand, below which are two shelves where you can put your belongings and above are hanging spaces for coats and so on.

Amenities across all accommodations include a 55-inch TV, a wardrobe with a small safe (not large enough for a laptop though), large-size This Works toiletries, GHD hairdryers, two small glass bottles of water, a Nespresso machine and kettle, excellent blackout curtains and soundproofed windows – a must at an airport hotel.

It is one of the quietest rooms I’ve stayed in, with zero noise from the corridor, roads or the airport, which made for a restful night’s sleep before an early flight home.

Master light switches have been built into the side of the leather headboard of the bed, along with two USB points and a plug socket. There’s also a digital alarm clock with wireless charging capabilities.

Companies can exclusively hire out the ninth floor, which includes 29 Executive rooms and three suites as well as the M Club which can be used as their own personal lounge. Rooms can also be hired on a day-use basis for those with a longer layover.

There are two restaurants and two bars across the two properties, all of which are designed by B3 Designers.

The aforementioned Eatery is an all-day dining spot and offers grab-and-go options (packaged in recycled or reused materials), snacks and Starbucks coffee along with an à la carte service featuring an East meets West Coast menu – a nod to its US guests. The kitchen is open until 10.30pm and the bar until 11.30pm.

Restaurant Flavors, located on the lobby level of the Sheraton building, serves a buffet breakfast with plenty of choice spanning both hot and cold dishes. 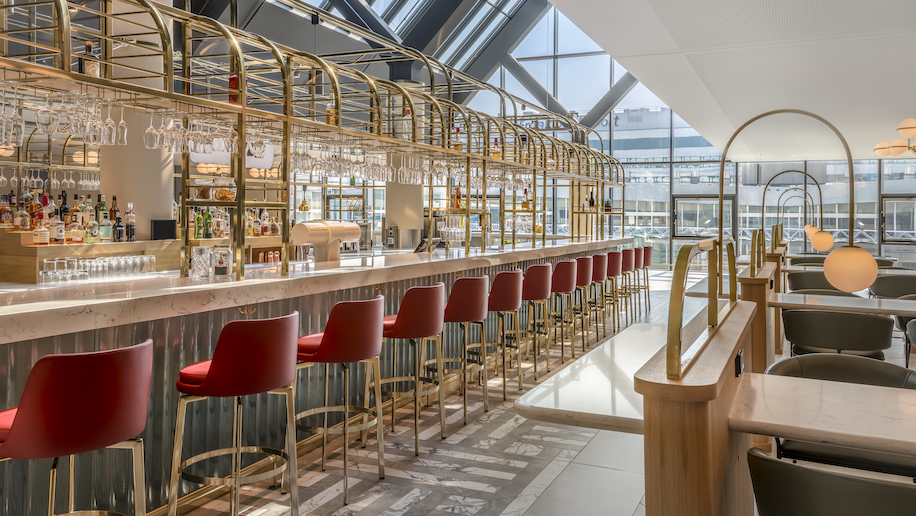 The two bars are also located on the lobby level of the Sheraton building. ‘The Bar’ opened in early December and is not closed off from the open-plan reception, with the intention to give the space a lively feel (we were its first guests, but can vouch for the handcrafted cocktails by charismatic assistant bar manager Kosta). The design features brass elements, a sophisticated black quartz bar, comfy red sofas and a wall of expensive bottles of spirits alongside a variety of glasses.

Adjacent is the darker and moodier Davidoff Lounge, the only smokers bar at the airport, which offers a selection of cigars from the humidor. This was not yet open during our visit. 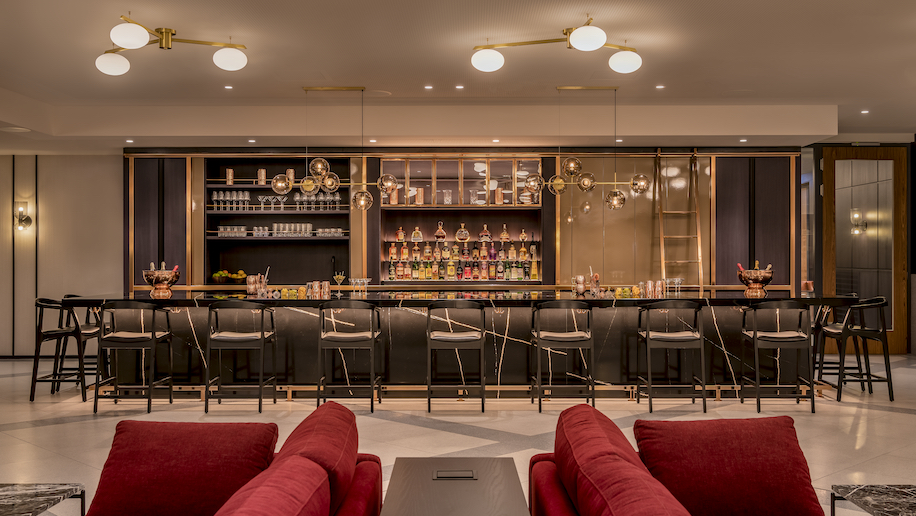 The properties have 58 meeting spaces, comprising 4,100 sqm, over three floors.

There are also two glass studios on the lobby level of the Sheraton building, which can be used for meetings or small gatherings.

The M Club on the ninth floor had not launched during our visit, but it looks like a fitting space for work or relaxing, with a warm design and comfortable seating spaces.

The Sheraton Club on the lobby level of the Sheraton building reopened in March 2022 following extensive renovation works. It has sophisticated design by JOI Design, with a blue colour scheme and various seating areas for up to 180 guests.

Breakfast is served at a central buffet counter, and warm and cold snacks are offered throughout the day. Adjacent are two meeting rooms which can be booked by Sheraton Club guests for meetings and gatherings. 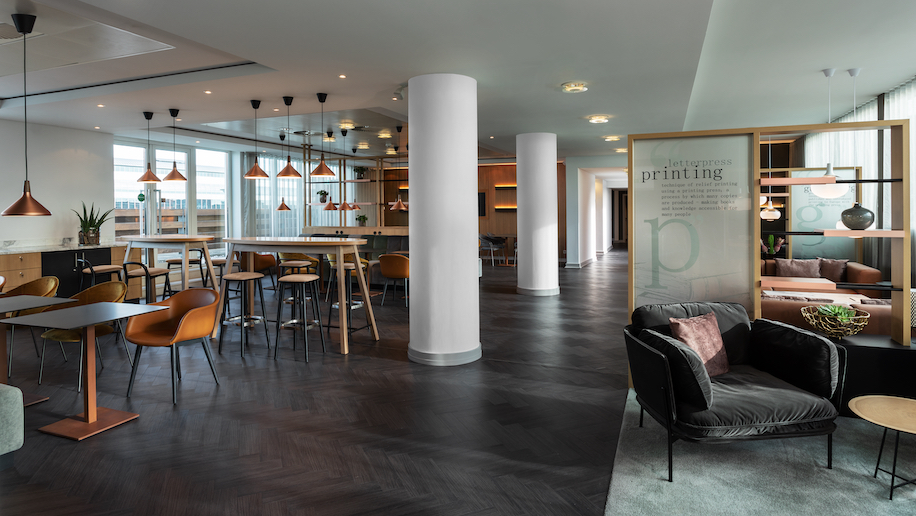 There is a shared 24-hour fitness centre at the conference level of the hotel with a wellness area including a sauna and steam room.

A separate M Club Fitness centre, located on the ninth floor of the Marriott hotel, will open next year, however this will be exclusive for all M Club floor guests.

While many might assume that airport hotels are boring and stuffy, this is not the case at this stylish property which has facilities for both the individual traveller and those attending large events.

The open-plan design is a great way to connect the two properties and make guests feel at home. The F&B spaces are well-designed for both sit-down dining and grab-and-go options, and the rooms are very quiet, so perfect for a layover and also for getting work done. If you want more buzz then you have all the public spaces at your disposal. 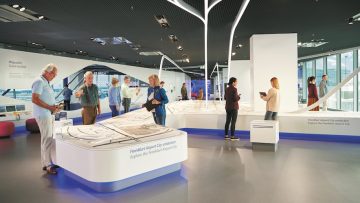 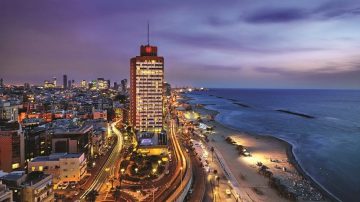 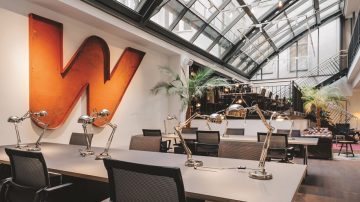 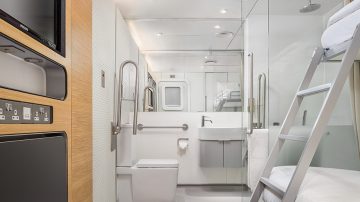