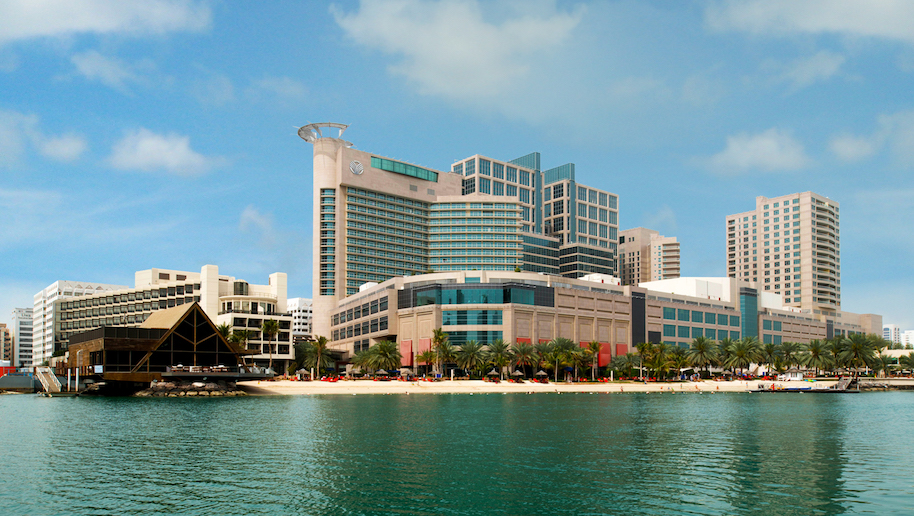 Background
Opened in 1993, the Beach Rotana was Rotana Hotels and Resorts’ first and flagship property. In the next five years the group plans to expand into Africa, South Asia and eastern Europe with a view to operating 100 hotels worldwide by 2020.

What’s it like
As its name suggests, the hotel looks out onto the water and has its own 120-metre private beach. Of the 565 rooms, 413 have views of the estuary that leads into the Arabian Gulf while the others offer “city views”.

In true Middle Eastern style, there are plenty of grandiose design features. Entering the lobby, guests are greeted by large, circular atrium supported by enormous mahogany columns. These surround an elevated lounge area at the lobby’s centre where a live pianist and singer perform in the evenings. Water features, plants and statues of local wildlife decorate the marble parquet walkway which wraps around the lounge area from the lifts, to various restaurant entrances.

The reception desks are to the right of the entrance – when I arrived, a friendly man from concierge took my bag from me, and told me that he would deliver it to save me the hassle. However, it was delivered about ten minutes after I got to my room, which, as it was 3am, was a little frustrating.

There is free wifi throughout the hotel, but you have to alternate between the in-room wifi, which requires you to input a code each time, and the hotel’s public wifi when you’re in other parts of the hotel.

Where is it?
Located in the Al Zahiyah district, the hotel is half an hour’s drive from the airport and ten minutes’ drive to the popular Corniche beachfront. It is a 20-minutes’ drive to Yas Island (home to the F1 circuit) and the ADNEC convention centre. 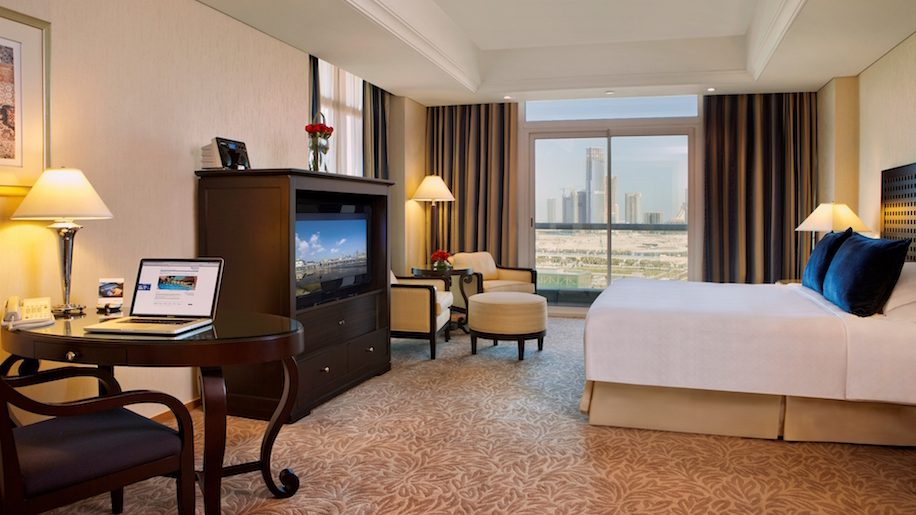 Room facilities
My Premium Suite was extremely spacious, with a bedroom, living room and dining area across 145 sqm, plus two private balconies with waterfront views. There are eight room categories in total from the Classic room, which starts at 30 sqm to the Royal Suite, which spans 240 sqm.

There are fresh flowers and plants in each of the rooms, which was a nice touch, as the décor was a little plain. The king-size bed had a firm mattress, a plush armchair in one corner and a desk in the other. The TV was lodged in a wardrobe opposite the bed and had a number of international news channels including BBC, CNN and Al Jazeera, as well as English-language lifestyle channels.

There was only one international plug socket in the room, by the desk, next to which there were two cupboards with ample storage space. There was also a kettle, tea bags and coffee, an iPod dock, and two cupboards. The marble-clad bathroom was also very large, with a deep Jacuzzi bath, rain shower (with the option of a fixed shower head), and L’Occitane toiletries. 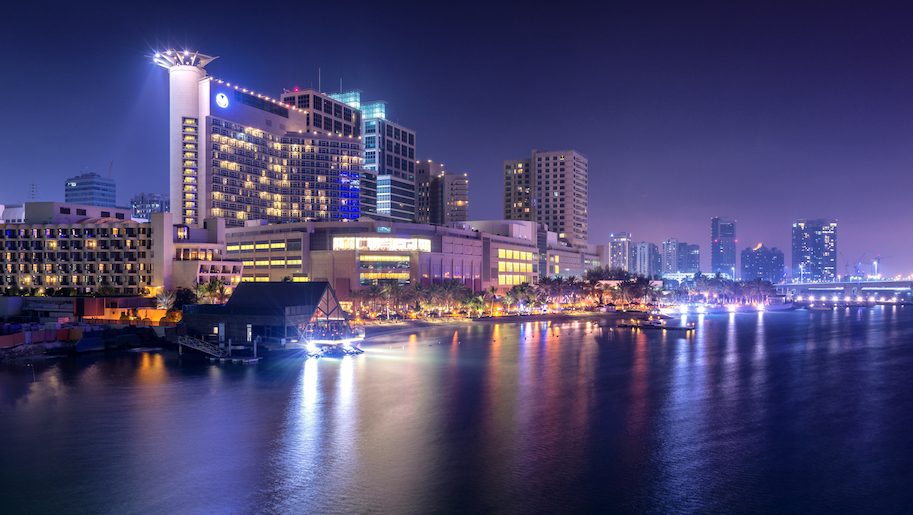 Restaurants and bars
There are 11 restaurants and bars throughout the property offering cuisines ranging from “American Japanese” to German, Indian and Italian. The vast food and beverage offering is a theme in this part of the world, where “brunch” is a weekly event for many expats and Emiratis – all-inclusive deals are served at all of the hotel’s restaurants.

One night we ate at Finz, the hotel’s seafood restaurant, which is in a separate venue from the main building, on the water’s edge. One dish to try is the “Classic” mixed seafood dish (AED350; £78) which includes hand shucked oysters, tiger prawns, marinated mussels, tuna tartar and lobster and scallop ceviche – all very fresh and presented on ice in a steel stand for sharing across the table. 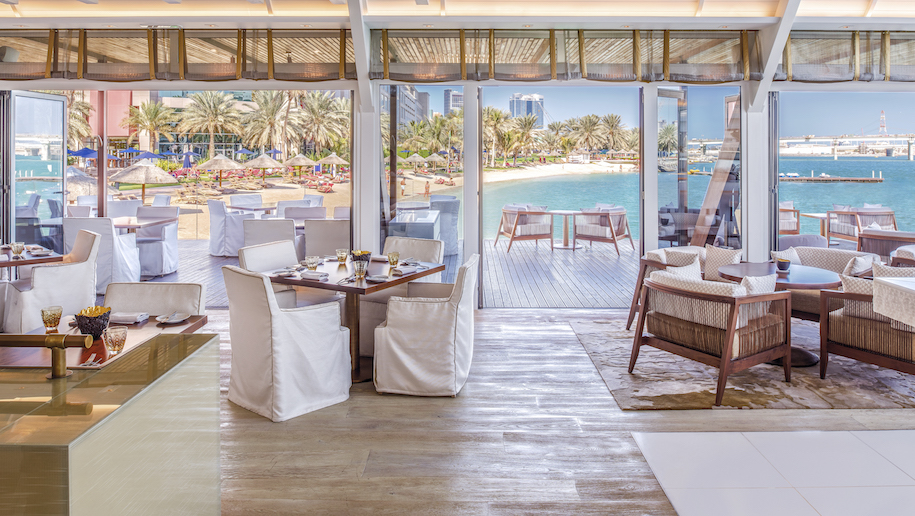 Meeting facilities
There are seven meeting rooms including the 1,100 sqm Al Thuraya Grand Ballroom, which holds 1,200 people and is one of the largest ballrooms in Abu Dhabi. The space has been used to host helicopter and car launches, and is popular with local weddings, which are an elaborate affair.

Leisure facilities
The hotel has a water sports centre, three outdoor tennis courts, two squash courts and a gym, which offers personal training, fitness classes and sports massages. There is also a temperature-controlled infinity pool and two beach bars. Down a spiral staircase from the lobby is the hotel’s spa, Zen, which offers facials, massages, and beauty treatments. I had a lovely massage there one evening – the therapist offered tips on how to avoid building up tension in my neck, which she had spent a long time working out. 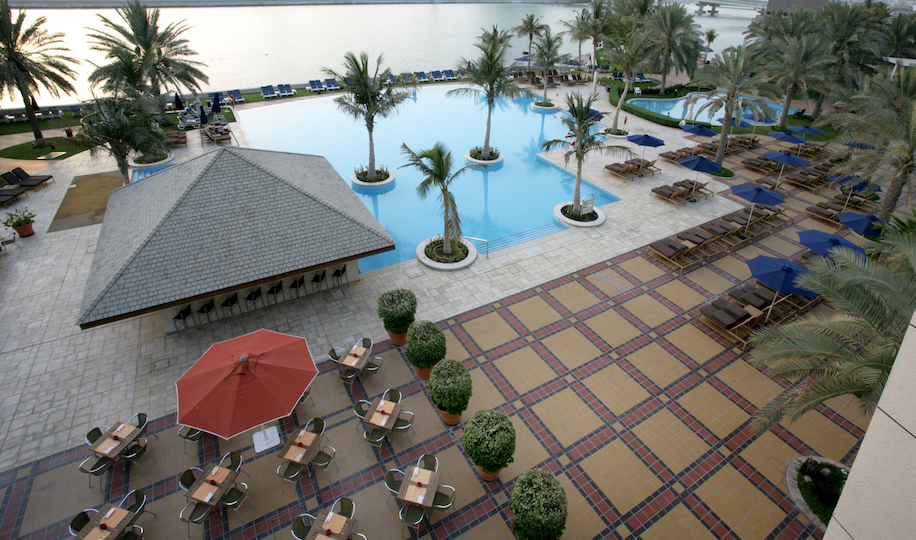 Verdict
Though a little dated in its décor, this is a comfortable hotel for both business and leisure, with an impressive array of restaurants and bars and a range of sports facilities and activities for families too.

HOW MANY ROOMS? 413 water facing rooms and suites; 152 apartments

HIGHLIGHTS The range of excellent restaurants and bars