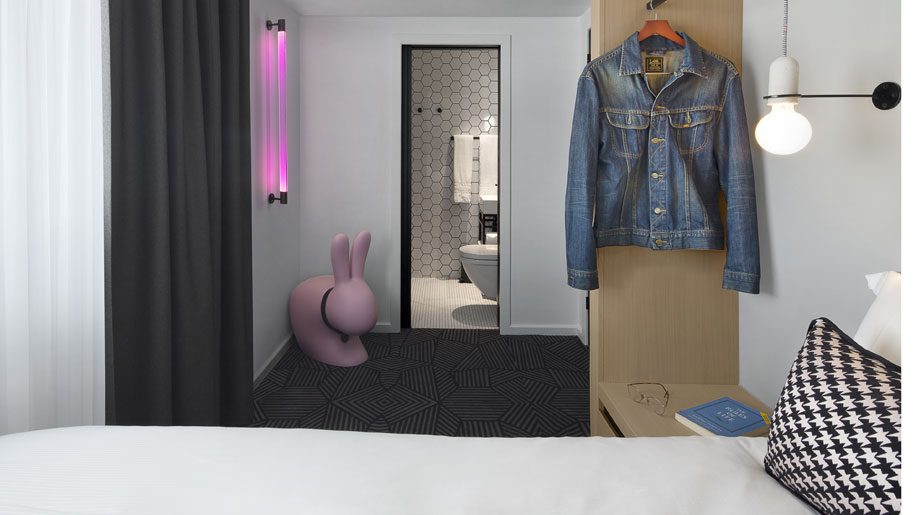 This new design-led hotel would certainly fit with our other “Affordable London” hotels offering small rooms in a central location, although the prices during the week seem generally to be over £200 per night, more than many other options for hotels of this sort (Hub by Premier Inn, for instance).

The entrance to the hotel is on Charing Cross Road, just below Leicester Square, and looks a little like a night-club. Up a few steps there is a small reception and then a lift taking you to the nine floors of rooms and tenth floor bar and restaurant (when it opens). 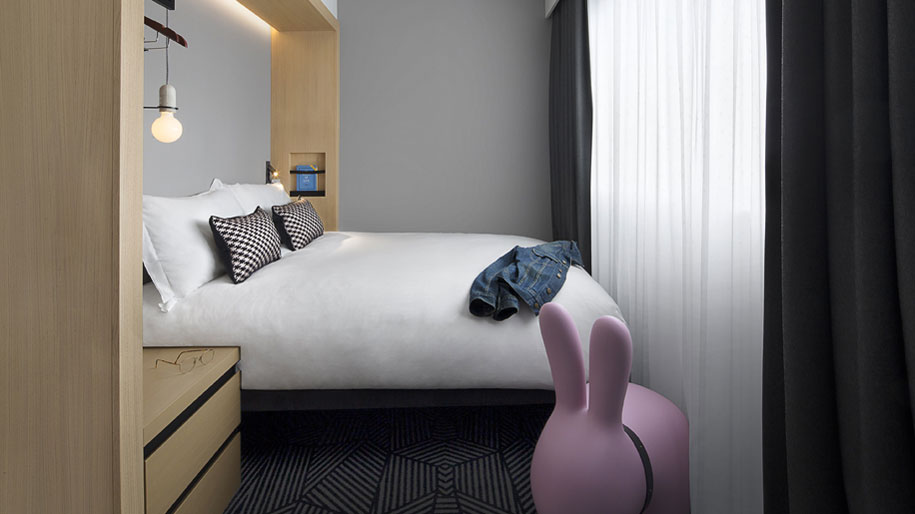 The hotel has 121 rooms in four tiers: Snug (10m2), nest (13m2), pad (16m2) and den (27m2). As with the rest of the hotel, the rooms have been designed by architecture practice Scott Brownrigg which is also responsible for the new Hard Rock Cumberland. It has taken inspiration from the nearby arts and design college Central St Martins, with each of the rooms inspired by the works of three of the college’s famous alumni designers –  Stella McCartney, Gareth Pugh and Alexander McQueen. Since I don’t know anything about that, I’ll quote the website:

“Each bedroom references the signature design of one of the three, from the headboard style to the carpet and bathroom tiles. For example, black leather features in the Alexander McQueen based rooms, whilst the Stella McCartney referenced rooms feature the softer feminine tones of her work. The public spaces within the hotel also reference McCartney’s work through the use of pink ascents.  The carpet pattern and the fun scale of the bathroom tiles references the bold geometric pattern of Gareth Pugh.”

As with other small hotel rooms, there is a hanging rail rather than wardrobe, and two reading lights and a unique pedant, as well as a built-in shelf for charging phones/tablets. There are no TVs in the rooms, no kettles, no mini bars and no safes.

Lighting design consultants Nulty Lighting have created the scheme in the rooms where a feature rod light illuminates the bedroom in pink whilst the bathroom spills out a subtle purple glow. Once you put your key card into the slot it changes to a white light. This lighting helps cover up (initially) the size of the room, and at least is more subtle than placing large mirrors everywhere which I find confusing at first and have occasionally walked into in the middle of the night.

Sound-proofing is excellent, though windows don’t open, so you rely on the air-conditioning to get the temperature correct. Each room also has a giant pink bunny stool wearing a ‘provocative leather collar’. Apparently people like taking Instagram shots of this. I resisted and left it in the corner of the room by the door. 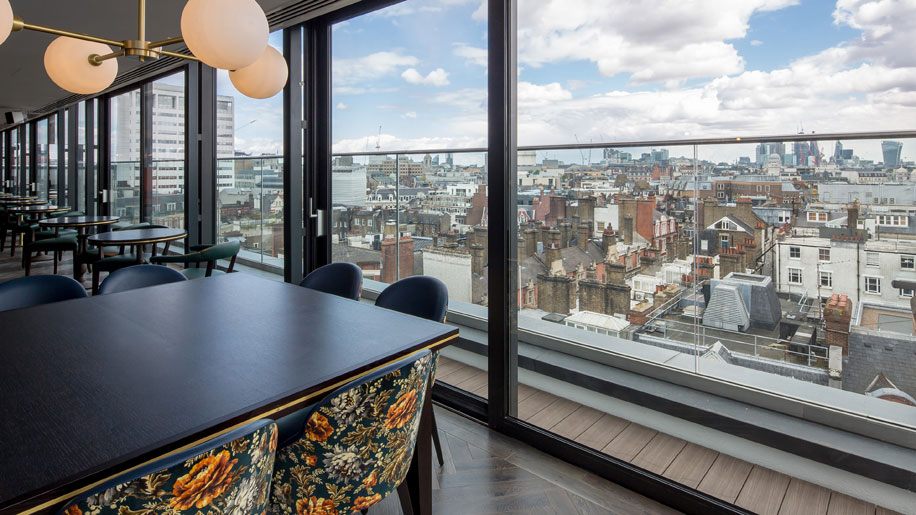 At the time of my stay the tenth floor restaurant was shut, with the hotel’s owners having put out a tender for an operator. I went up to have a look and was impressed with the views. The design of the bar is inspired by “a Georgian drinking den as captured by the 1764 satirist William Hogarth”. What that means in practice is Georgian-inspired wallpaper with a botanical foliage pattern, and a design by Elegant Clutter with House of Hackney fabrics used on some of the furniture.

Instead if you want breakfast (or a drink) then you can go across to the Hotel Indigo and use its top floor restaurant, but to be honest, there are so many options around Leicester Square you would be far better just heading out to one of those while this restaurant waits to be opened. 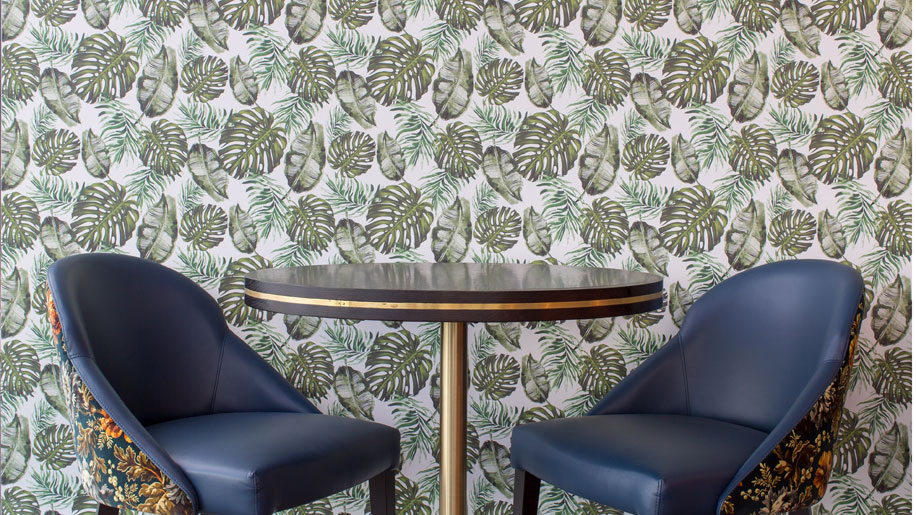 This is an excellent hotel, perfect for short stays, with a no-nonsense approach to what you want from a room (good bed, good wifi, sound proofing). Prices are high compared with some other central hotels, but the location is perfect for anyone wanting the West End. It’s a shame there’s only one of the brand, really.

The view from the restaurant (when it opens).

A mid week stay in a Snug Room for two people was £216 (flexible rate) in December. 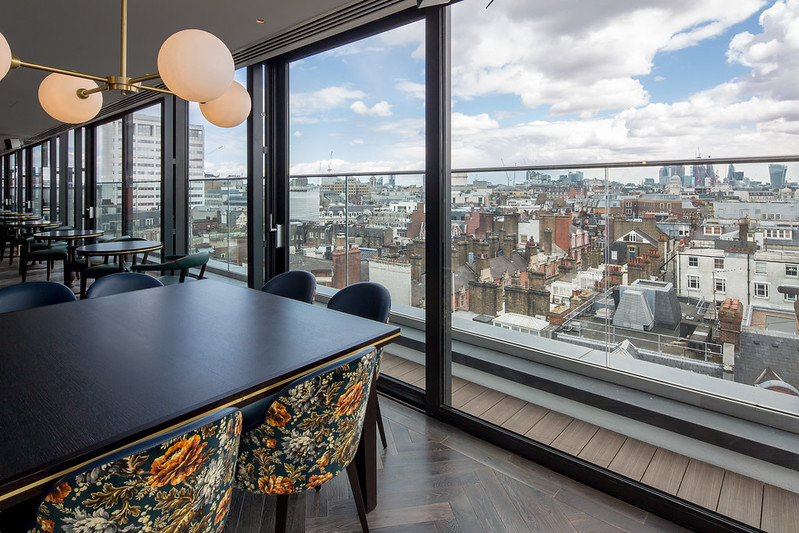 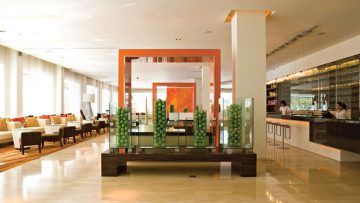